Oh, it’s the MOST won-der-ful time of the year! Lots of fun stuff going on in the world of nail polish this month as the indies and commercials alike get their spook on and flood the market with their Halloween-themed collections. I have somehow remained immune (some of the indie collections I like are only available from overseas stocklists with exorbitant shipping rates, and there’s only so many years you can buy the same glow-in-the-dark topper, so the decision was not a difficult one) but these two polishes from China Glaze’s Apocalypse of Color collection spoke to me, because they’re ever so purty and just a tiny bit different from the usual Halloween offerings, with lots of usefulness beyond the upcoming ghosting season.

First we have the glitter topper of the collection, Rest in Pieces. It’s a fun, festive assortment of copper, black and holographic hex and bar glitter. You will not like this polish one bit if you’re not a fan of bar glitter (like visible nail lines, bar glitter is a divisive topic in certain well manicured circles), although I really love the visual interest it adds to this mix-and-match mani. Here I layered two light coats of Rest in Pieces over Cirque’s grass green Panacea and OPI’s frosted brown Warm Me Up for a pretty and glittery fall design.

The other polish that looked like something a little out of the box (in the spirit of Halloween and all things creepy, I can’t let this opportunity go without making an “Awwwww, what’s in the box?!?” joke) is Don’t Let the Dead Bite, a sheer pink polish studded with dark rose glitter. I’ve seen this polish described on other blogs as red glitter in a sheer nude base, and one blogger said the overall effect was like blood spatter (ew), but I’m getting a definite red rose and entrails vibe off Don’t Let the Dead Bite (bigger ew.) Not to say I don’t like the entrailey effect – I actually like it quite a bit. It’s super soft and pretty and extremely flattering on paler skin tones like mine, and it does that thing I love where it looks as though the hex and teeny tiny bar glitter is hanging suspended in the polish. Here I simply painted on three coats of Don’t Let the Dead Bite for a delicate, jelly sandwich-type effect. 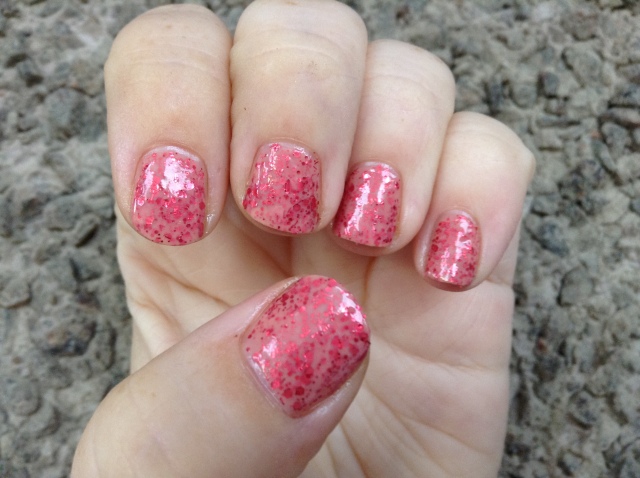 4 thoughts on “Bits and Pieces, Blood and Guts”