Something a lot of people don’t know about my husband, because it’s a bit he doesn’t trot out very often in polite company, is that he is a fantastic mimic. He picks up on people’s accents and verbal ticks really well and can fire back flawless imitations that would make your head spin. Although I wouldn’t call them imitations in the strictest sense of the term, as the usual impression subjects – Sean Connery, just about any Mike Myers character, John Wayne – are somehow slightly beyond his reach (or interest.) But mimicking accents and speech patterns and sounds – my lord, the sounds – are all square in his wheelhouse, and he loves tormenting me with his far too realistic vocal impressions of things that scare the ever living crap out of me, like Gollum, the aliens from Mars Attacks and the crawling-down-the-stairs-inside-out-and-backwards-dead-girl from The Grudge.

Fun story: One rainy evening on our honeymoon we went and saw The Grudge. When we exited the theatre at Universal Orlando’s City Walk, an outdoor pedestrian mall whose signage and lighting makes Vegas’s look downright subdued, we were both scared shitless and jumping at every little sound. But I guess he got over his fright, because at some point I awoke in the evening, disoriented from sleeping in a strange bed in an even stranger hotel room, to find my new husband softly, but then with frightening intensity, hacking out that odd, almost electric-sounding gagging noise the vengeful, inside out ghost woman from The Grudge hits you with two seconds before she eats your soul. It didn’t take me long to figure out that my beloved was pulling his new wife’s leg – you know, once my heart rate returned to something approaching human after skyrocketing into race horse territory – mostly because he was cackling like a jackass, and so with a swift, “You’re an asshole” and a smooch, we both rolled over and drifted back to dreamland. But really, his impressions of the oogie boogies that keep ME awake at least are uncanny, and my personal one-way ticket to Freakville (which is why he doesn’t bust them out too often; a joker, yes, but mean, never.)

So it was kind of funny that I bought this polish, Different Dimension’s Why Am I Such a Misfit?, because the character this polish is inspired by, Hermey the Elf from 1964’s Rudolph the Red-Nosed Reindeer, is one of those ones my husband likes to mimic, and right on up there on my hit list of hate. I just bristle when that movie comes on around the holidays, and if I’m not out of the room by the time Hermey somehow declares around the eight litres of saliva in his mouth, “I want to be! an orthodontist!” my husband comes and finds me and does it for him. ‘Cause that’s love, folks!

One small note about this polish that has nothing to do with things I hate: While the white crelly (shudder) base is of a nice, medium thickness, Why Am I Such a Misfit? is positively stuffed with glitter large and small (mostly large.) It’s a difficult one to apply, and worn by itself, it tends to look lumpy, even beneath two perfectly smoothing layers of topcoat. Next time I’d layer a couple of coats over a white base polish to cut down on application time and all of the lumpy. 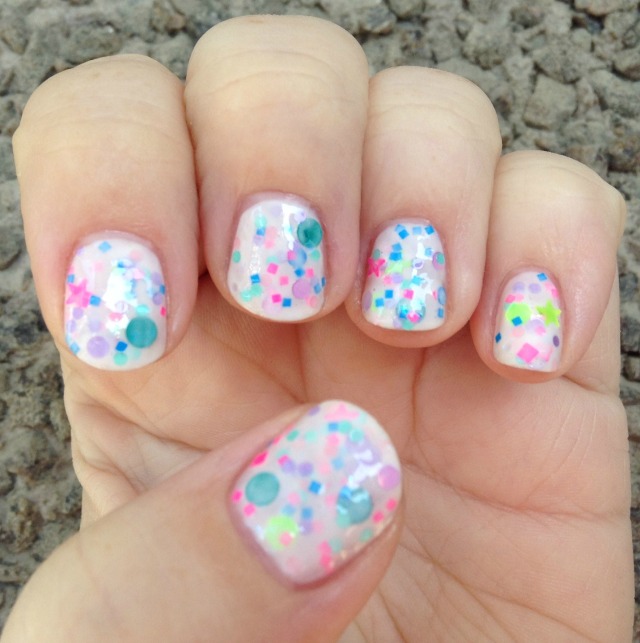