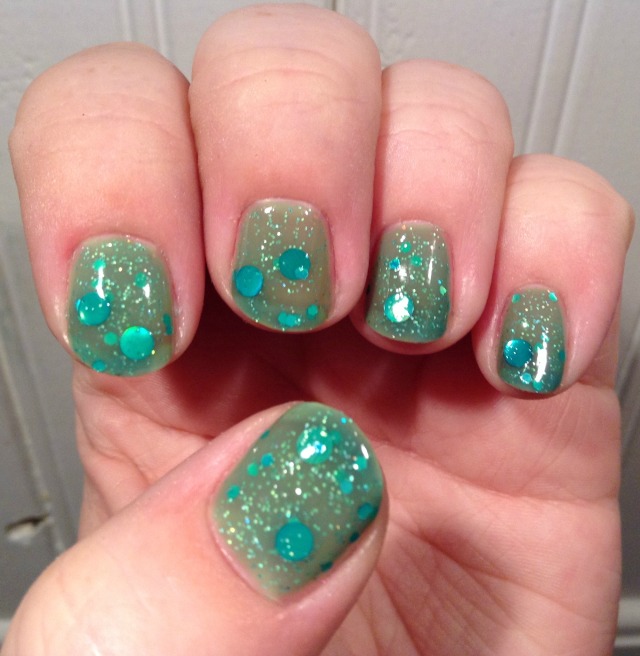 I dug this lacquer, Polish Me Silly’s Mermaid Tears, out of my stash yesterday in the hopes of using it in service of the final week’s prompt in February’s N.A.I.L. Challenge. The theme was least favourite polish, and seeing as my true least favourites (very few, thankfully) are presently gracing a landfill just outside of town, that left Mermaid Tears, a green-on-green thermal jelly sprinkled with green holographic circle glitter. I’ve had this polish for a little over a year now, and application has never been anything but a pain. The large circle glitter – lots of it, and clearly visible in the bottle – resolutely refuses to come unstuck from the sides of the bottle, no matter how long you leave it upside down, and the chartreuse-to-jade thermal jelly remains stubbornly sheer, withstanding any attempts at opacity. It was a disappointment, and being an online-only indie purchase, a not inexpensive one, which is the only reason it’s been granted a stay of execution this long. I figured I’d give it one more chance to not do its thing for this challenge prompt before sending it off to the big stash in the sky.

Which is of course the moment Mermaid Tears decided to pull itself together and become the polish I always hoped it would be. Don’t you hate it when that happens? It’s like those times my computer whiffs the big one seemingly for me and me only, because the second I show Mr. Finger Candy IT Support, it’s all “Hey, no problems here. Look at me runnin’ all fancy!” and I want to dropkick it across the room.

But I really have no complaints here. A polish I once liked enough to buy is now behaving the way it was always supposed to – huzzah! And I had to chuckle a bit when I looked down at one point and saw TWO large green circles stuck to my brush, because of course. 🙂 And I don’t know what weird confluence of events or conditions led to it finally behaving (although it is still so, so sheer) but I’ll take it! So back to the drawing board on this least favourite thing, because Mermaid Tears actually redeemed itself pretty nicely.