Calling all Clash of Clanners! Mr. Finger Candy, who is a level 118 Clasher, is in need of a new clan, having outgrown the once-benevolent, now-trigger happy gang of weirdos he presently lords over. All interested parties should report to the comment section of this blog post. I gather reaching level 118 is something impressive? You know what else is impressive? How he managed to cajole me into doing another manicure inspired by his odd little “casual” gaming obsession, when I’ve yet to do even one manicure inspired by my not-remotely-casual gaming obsession, the Sims. How is this fair? The things we do for love, folks. Like these nails, which highlight the resources, or collectibles, one has to amass during the game (from index to pinkie, elixir, gold coins, dark elixir and gems), plus a little shout-out to his admittedly pretty impressive ranking.

Sometimes you don’t need to say much about a nail polish, because its extra lovely qualities speak plainly for themselves. This polish, the exquisitely beautiful holographic Dream from Liquid Sky Lacquer, a completely new-to-me indie manufacturer, is just such a polish. And I’m an extra lucky girl, because I received this stunner from an Internet friend as a gift really “just because” – her generosity (and excellent taste!) make it that much lovelier. 🙂

Gahhhhh, look at that holo! Wuh oh, I’m doing that thing again where I’m mesmerized by my nails; I once referred to it as “acting like Nailcissus” (the oft-forgotten god of nail lacquer.) But Dream is just so phenomenally pretty, and I can’t get enough of its gorgeous, blue-tinged silver holo speckled with tiny metallic blue flakies.

Dream is not just another pretty face, though; the consistency of this polish is wonderful, thin and easily controllable, but fully opaque in two light coats. Wear-wise, Dream definitely lives up to its name, surviving the painting of four mirror frames, one half wall and four shelves, and a two hour, chemical-laden deep clean of the bathroom without a chip, smudge or snag. Fantastic!

Fret not if you don’t have a thoughtful friend through which to get your Liquid Sky fix, however – Carolyn, the proprietess of Liquid Sky Lacquer, sells her wares both through her site (closed at the moment, but due to reopen on May 31st) and Harlow & Co.

Last year, for the Oh Mon Dieu Nail Art Challenge, the ladies of N.A.I.L. set lavender as one of the daily themes. Lavender is indeed lovely (gourmand lavender scents, like lavender pound cake, are some of my favourites) so I can’t blame them for coming at it again, this time as week four’s theme in May’s nearly-finished Nail Art Challenge. This is especially great news for me, because it gives me a chance to redo the lavender nails I submitted last time, which were awful. No, really (see below.) I even remember thinking at the time that I had whiffed it, and I could have done so much better.

So I did! This time with the help of some of my holographic friends, including three Enchanted polishes (deep eggplant February 2015, dusky purple Dream On and pale lilac Time to Pretend.) As nail artists and nail polish aficionados, I think we sometimes hoard our holographic polishes for special occasion manis, but with their built-in shading and highlighting, they’re perfect for detail work, like these tiny lavender buds. Ahhh, MUCH better.

I wish there was a tad less glare on this photo, because I think it’s obstructing my “Loch Ness Monsters meet cute” design. Blasted sun! What’re you good for anyways? 😉

But really, how random would it be to be cruising around some loch in Scotland, thinking you’re THE Nessie, only to run across another? I’m guessing very. And probably true love, even if the first words they exchanged were the unimaginative “Hi” and the even less imaginative “Hey.” And yes, I’m talking about Loch Ness Monsters. Talking Loch Ness Monsters. Because go big or go home, right?

Surprise to absolutely no one, but I adore the Haunted Mansion at Disney World in Orlando, Florida. The Mansion plays into a number of my fantasies, including my ideal home and job; had I my druthers, I’d move in and be working there as a disgruntled maid by the end of the day. The Disney cast members who play the maids and butlers at the Haunted Mansion are an especially dour lot (you’d be, too, if you had to clean up after 999 happy haunts) and combined with the locale and the uniform, it’s pretty much a perfect fit. But life sometimes does not permit running away to live in a theme park attraction, and so in lieu of that particular dream, I thought I’d try out another Haunted Mansion nail art design, this time the maids’ starched, black and green striped dresses, including the tiny bats that adorn their ruffled caps. Foolish mortal? I think not! 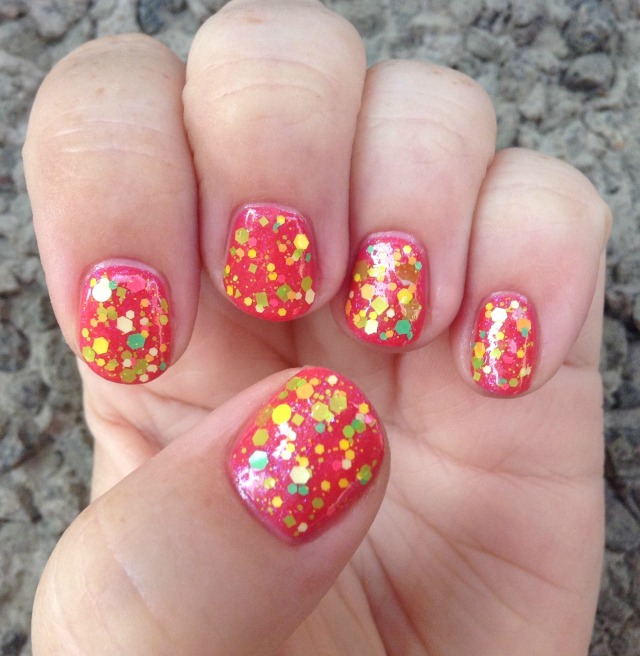 You’ll run zero chance of contracting scurvy sporting this citrusy mani. Just in case that was a worry. 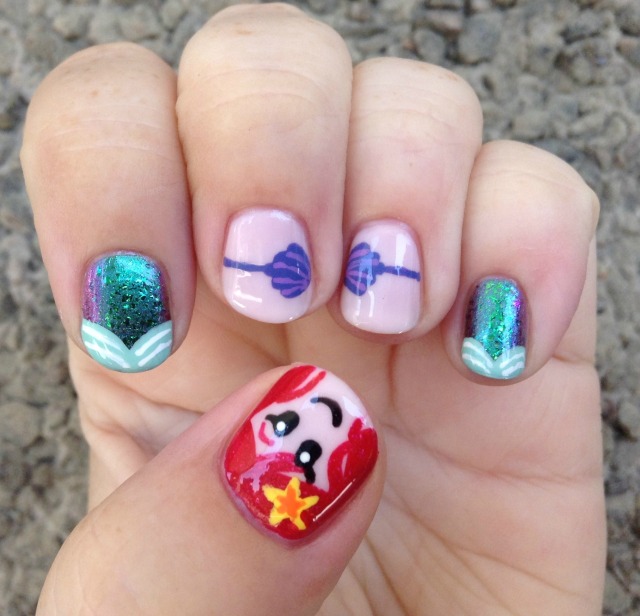 ‘Round about the time I started this blog, I began a super casual, self-imposed challenge to capture all the ladies of the Disney Universe, be they princess, villain or something else altogether, in tiny, lacquered form. That extremely loose general guideline has led to some fun Disneyfied designs, although I’m now at the stage of my nail art abilities where I’m very critical of my early work, and I think I could do better on just about all of them, including – especially – this Ariel design. I was initially going to post this as a Then and Now post, but I’d rather not highlight that initial half-assed effort (although if you’re tremendously curious, you can find it here.) Like, what are those things? Seashells? Flowers? It was lazy work that barely fit the theme, and I’m glad for the chance at a redo.

These updated Ariel nails are also my entry towards week three’s theme of most expensive polish in May’s N.A.I.L. Challenge. Here I used my priciest lacquer, Enchanted Polish’s Magical Mystery Tour, as well as a couple of close contenders, ILNP’s Supernova and Picture Polish’s O’Hara. I don’t necessarily believe that there’s always a direct correlation between cost and quality, but these polishes make arguing that assertion very difficult, as they’re all phenomenal. O’Hara in particular, the lush red I used for Ariel’s hair, is Scarlett perfection.

Hello there, cutie! I knew you’d be grateful for the remodel. 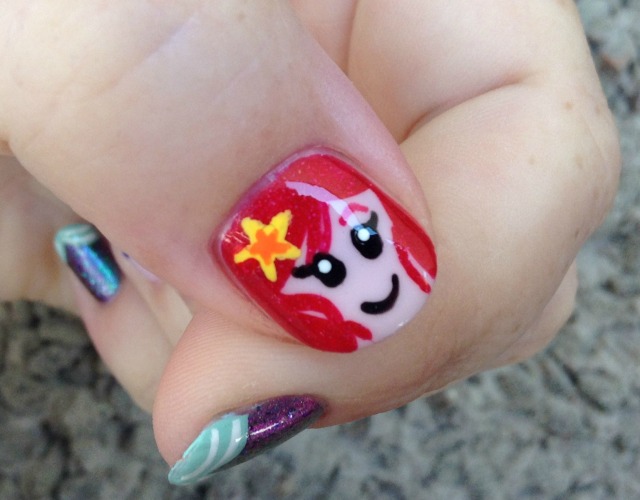 I thought I’d kick off the weekend with a porny post of an absolutely stunning polish from my very small untrieds pile, A England’s holographic Crown of Thistles. A England is one of those brands I tend to discount for no good reason whatsoever, because their polishes are always drop dead gorgeous, with flawless formulations and exquisite branding. Yet Crown of Thistles, a polish purchased in a ferocious post-holiday binge, has to date somehow remained undetected, caught up in a storm of glitterier, Springtime upstarts. So I thought I’d give this polish its due and finally let it do its beautiful thing.

And so how did it do? WOWZA. Crown of Thistles is a stunner, a beautiful, rich orchid holo stuffed with a coppery-rose shimmer that gives this polish gorgeous depth and visual interest. Holos always do their best work in direct lighting, but Crown of Thistles positively glows in the sunshine, throwing off tiny, copper-tinged rainbows. Like another favourite A England Polish, Rose Bower, Crown of Thistles is a true one-coater, and dries to a satiny, eggshell-type finish (although in the interest of full disclosure, I used two coats for these photos and one coat of Seche Vite, because I always do.) This polish will make a fantastic background for nail art, but with its one-coat formulation, vibrant, jewel-toned colour and stunning holographic effect, it’s the perfect polish for someone who just wants a perfect polish, no fuss, no muss. And while it’s not quite as pronounced as Cirque’s sweet floral scent, A England’s lacquers smell not altogether horrendous, a minor miracle in the world of nail polish. Lovely – a big recommendation on this under-the-radar beauty.

Coming at you with another theme park-inspired manicure, this time a bit of nail art honouring the Hulk roller coaster at Universal’s Islands of Adventures in Orlando, Florida. Since its opening in 1999, the park’s skyline has been dominated by the graceful green bends of the Hulk’s towering superstructure, a twisted mass of neon green steel that propels riders up and down its twists and turns at speeds of up to 108 km/hour. Like its superhero namesake, it is a beast of a ride, the likes of which I fear my now-middle age stomach and gag reflex can no longer handle. Really, just the thought of strapping myself in and hurtling around for two minutes at 4 Gs is enough to make me feel a bit queasy. Oh, the ravages of encroaching old age! It’s not enough that we get wrinkles and are perpetually tired and everything hurts all the damn time, but now we can’t even purposefully try to make ourselves sick without actually getting sick? What bullshit is this?! 😉 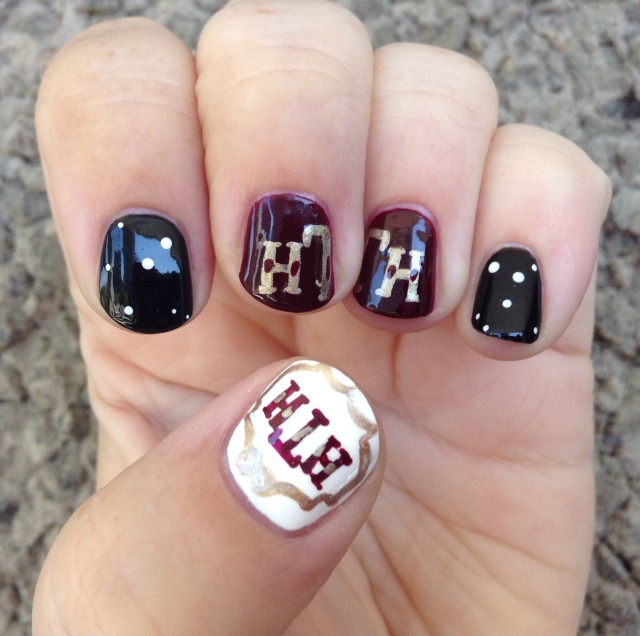 I’ve spoken before – at length, some may say – about my love of the Twilight Zone Terror of Terror ride at Disney’s Hollywood Studios. It’s my favourite attraction after the Haunted Mansion (rest in peace, Universal’s Jaws.) These nails are inspired by the setting for the ride, the fictional Hollywood Tower Hotel, “a star in its own right, a beacon for the show business elite.” No surprise here, but when you exit the ride, you exit directly into a gift shop. The Tower of Terror’s gift shop is a particularly lovely one, themed like the lobby of the neo-Mediterranean-style hotel (pre-lightning-related deaths and hauntings) where one would naturally expect to find a store selling overpriced souvenirs emblazoned in the hotel’s logo. I’ve wanted to get one of the plush Hollywood Tower Hotel robes (or maybe two; his and hers) every time I’ve ever ridden the ride, but the thought of lugging a weighty bundle of fabric around with me for the rest of the day has put me off every single time. I always promise I’ll go back and buy one before leaving the park for the day, but that also has never happened. I guess I just don’t like robes all that much? Actually, no, I don’t like robes at all. Better stick to shot glasses.