Oh no. No, no, that doesn’t sound right at all. Pretty disgusting, actually. And after I came in all strong on that “winner winner” opening note. But GUYS! GUESS WHAT? I won the Canadian prize pack for the Oh Mon Dieu Nail Art Challenge! And for my favourite nails of the challenge, too, my Simpsons Beerquarium mani (yeah, I know I’ve said previously that I don’t play favourites, but I didn’t want the other manicures to feel left out.) This is totally awesome! I hardly ever win anything (although now that I’m thinking about it, I won a ridiculous number of prizes at various bridal shows I attended when Mr. Finger Candy and I were enfianced.) But this is seriously so much better, in no small part because the prize is kickin’ – lots of cool polishes and polish-related accessories I’ll be sure to talk about endlessly on this blog! So great!

But on to this mani, which I was hard at work at when the good news came in. I think these multichrome, gradient, holographic mermaid tail nails (with pearl-in oyster accent nail) are kind of the shit. There’s a lot going on here, but I’m just so blinded by all the colour-shifting, rainbow sparkling beauty to give much of a frig. For the multichrome-on-multichrome gradient, I topped two coats of Enchanted Polish’s turquoise-to-purple Magical Mystery Tour with two sponged-on coats of Enchanted’s mostly magenta Entwined. I then added the fish scale detailing with Liquid Sky Lacquer’s megawatt silver holo, Dream. Finally, on my ring finger I painted on something that I think looks more or less like an oyster (although it could also be a purple catcher’s mitt.) Winning mermaid magic. 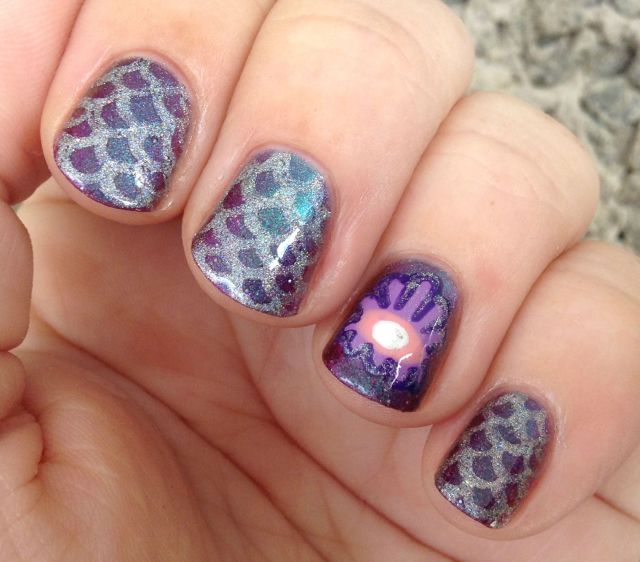