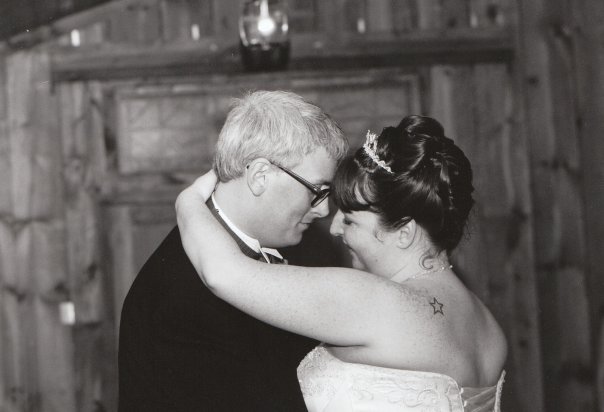 I don’t often talk about my life on this blog without tying it to nail art in some way, but today I simply feel like tooting my own matrimonial horn, because it’s my 11th wedding anniversary! Today’s weather is very much like the weather we had the day of our wedding (cool, windy, sporadic rain), although Halloween fell on a Sunday the year we were married – purely from a party perspective, this year’s Saturday is obviously THE choice time.

But pleasantly enough – and I’ve spoken about this before in another wedding-related blog post with some TERRIBLE accompanying nails – it wasn’t the party part of our wedding that I enjoyed the most. Sure, I had a great time mingling, nibbling and dancing the night away with my family and friends in a gorgeously decorated old barn, but the ceremony itself is where I actually had the most (unanticipated) fun, suddenly becoming quite giddy at the prospect of marrying this terrific guy. Our vows were even fun, the two of us kind of winging it. And even though we made a number of personal changes to the standard, non-denominational ceremony in advance, neither one of us got that wound up about memorizing, well, anything or about “performing” in public – I chalk this up to his formative years spent in the theatre and mine spent in the ballet studio; we’re comfortable on a stage. And that comfort made for a fun experience – lots of banter and goofy smiles and the perfect certainty that comes with knowing that you got one of the great ones. That we should all be so lucky. 🙂

And so happy 11th anniversary to the man who puts the Mr. in Mr. Finger Candy. I’d marry you again in a heartbeat, my love, and not just because you’re easily-bought tech support. Well, mostly not. 😉 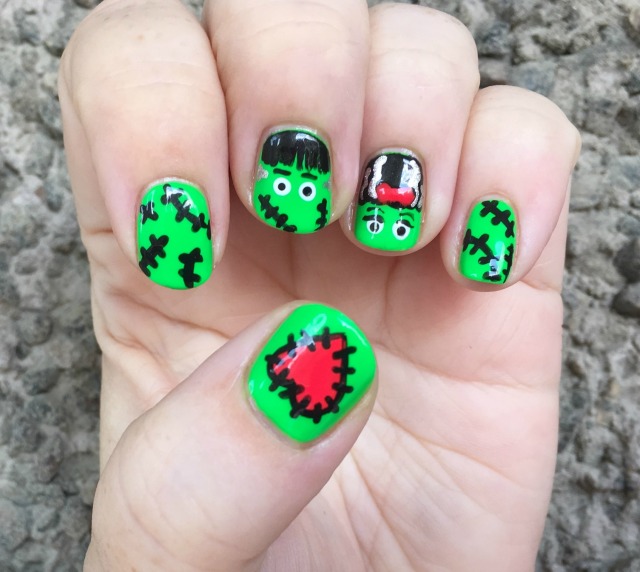 The one thing nobody ever talks about with regards to Frankenstein’s monster and the Bride of is the offside chance that they could have HATED each other. Maybe too much alike, or built from people who were too much alike. Most uncomfortable breakup ever! 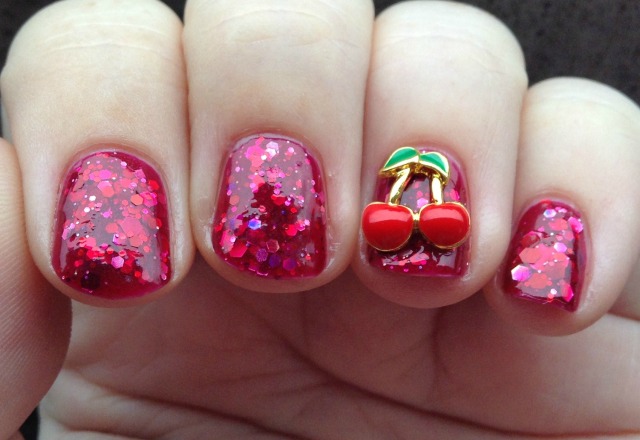 Younger readers are confused right now because they have no idea what that’s referencing, and more seasoned, shall we say, readers are confused because did I seriously just make a Warrant reference? Yes, yes, I did! But what does it say about you that you knew what I was talking about, hmm? 😉 Skeezy metal music, kids. Us olds are talking about our silly old stuff again. I know, I know, it’s wicked tiresome. I swear, one day we will stop talking, just wait.

But for now, I’m going to talk about this manicure, which was inspired by the glitter polish I used here, Emily de Molly’s The Unloved, which I think looks like cherry pie filling. But then again, is there any polish that doesn’t remind me of food in some way? Very few, actually! Then I remembered that I had this adorable little nail charm from Daily Charme that would literally put the cherry on top of this gorgeous manicure. Sweet! Now sing it with me, everybody: “Tastes so good/make a grown man cry/sweet! cherry! pie!” Mmm, cherry pie. 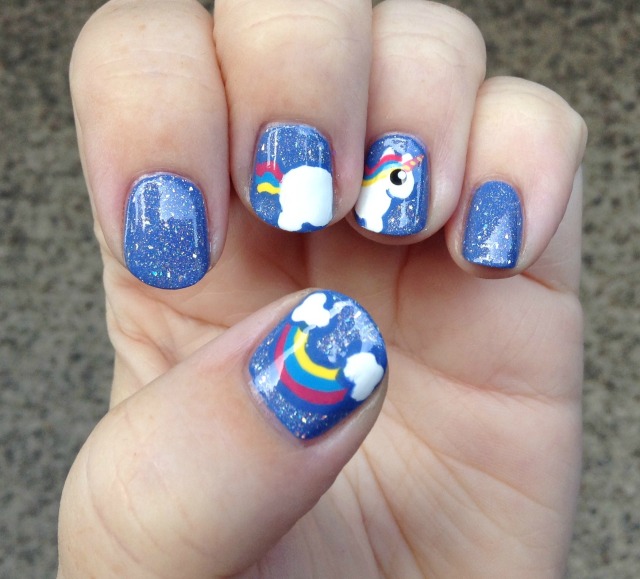 Pudging out on a field of rainbow holographic twinkle dust. I think I’ll call him Trevor. He just looks like a Trevor, doesn’t he?

And because it will most likely get asked, the holographic glitter topper I used here (over a base of Essie’s periwinkle blue Pret-A-Surfer) is Enchanted Polish’s Rainbow Juice (With Pulp.)

Right, so these nails are…well, I don’t know what these nails are, actually! This manicure started off life as depicting a shrouded path meandering through the woods as the night sky twinkles prettily above – that’s that business going on on my middle two fingers. But owing to my amazingly inexpert tree work, those jagged black silhouettes look more like sinister, broken-off cornstalks, and now we’re back in Stephen King territory again.

Anyhow, I had just finished this wuh? of a manicure and was disappointed that it had turned out nothing like I had intended. And I was actually just about to remove it and start again when I remembered that in one of nail blogging’s weirder little ironies, the manicures I dislike are nearly always the ones that get the biggest, most positive response, so go figure. We’ll see how this one plays out then!

I carried dark purple calla lilies in my wedding bouquet, the 11th anniversary of which Mr. Finger Candy and I will be celebrating this Halloween. I had initially wanted to carry black roses, which I knew were no such thing – “black” roses are actually just very, very dark red or purple roses. I knew this! And yet every single florist but the one I eventually went with almost gleefully told me that black roses didn’t actually exist and they were really just very, very dark red or purple roses, sometimes even after I told them that these were things I already knew, almost like a mea culpa. It unfortunately took a lot of the fun out of it. Also, I could see that “black” roses were going to be a real light-suck when it came time for photographs. And so I eventually ended up going with blackened purple calla lilies and bright green pepper berries, with a smattering of dark purple mini roses and fresh greenery. It was gorgeous! So here I tried to capture the bouquet of lilies and pepper berries I carried, with a little holographic shimmer for extra pretty measure.

I think these nails look like multi-coloured twinkle lights as seen through squinted eyes. Or possibly the pattern on a tweed jacket from the 1980s. Actually, didn’t James Spader’s Stef wear a black linen suit in Pretty in Pink in this exact pattern? He had such a special wardrobe in that movie.

Anyhow! No matter the inspiration (although I guarantee you it wasn’t Pretty in Pink; I friggin’ hate that movie – too mean) I think these nails are super cute, and actually, in hindsight, a rip-off of a portion of my own design of last Christmas, which you can see here. Oops?

And because it will most likely get asked, the base polish I used here (from which I drew inspiration for the colour of the “lights”) was Pure Ice’s RespecK, a gorgeous polish with a stupid name that I will begrudgingly forgive it for on account of its $1.97 price tag at my local Walmart. 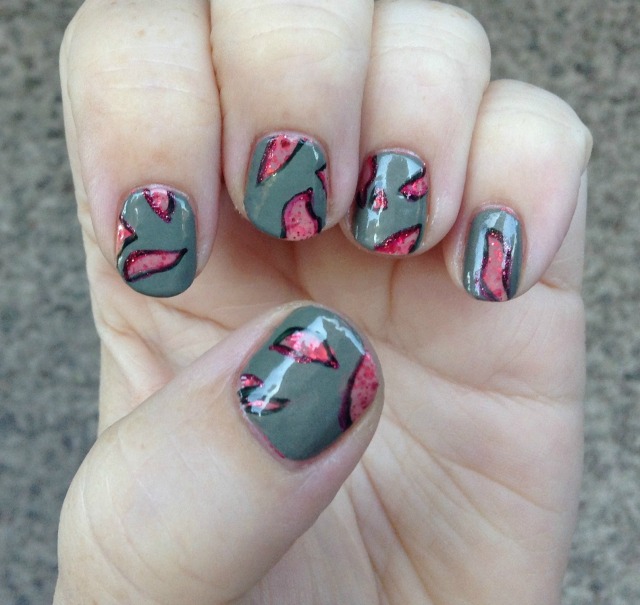 I don’t watch The Walking Dead, but in the interest of my ongoing education in pop culture and the fact that Ninja Carol is a total badass, I armchair quarterback the occasional episode. Fear the Walking Dead, however, is a show I can speak a bit more authoritatively on, if only because I’m continuously gobsmacked at how stupid the central characters can be. It’s a train wreck of reckless idiocy I’m powerless to tear my eyes from. I’ve since come to understand that the concept of a zombie is one that is totally unfamiliar to the denizens of the Walking Deadiverse, hence all the talk of walkers, geeks and anything-but-the-Z-word. But when the entire world is going to hell around you – civil disobedience, military invasions, burning hospitals, riots, police shootings, the woman next door who’s been stuck in a gap between your fences, snarling and bleeding from the eyes, FOR DAYS – it simply won’t do to put on a happy face, have a cuppa tea and wait for this all to blow over. “What’s going on, Dad?”, the befuddled catchphrase of one of Fear’s central mouthbreathers, has become shorthand around my home when you’re caught being a dumbass – “Dad? What’s going on, Dad? Why is there all this water on the counter? Dad? Dad? Daaahhhhh-aaaaaddddd?”

All that to say these are zombie skin nails, featuring a polish from last year’s China Glaze Halloween collection, Don’t Let the Dead Bite, that I think looks like entrails (in the very best way!) Guaranteed walker-approved. 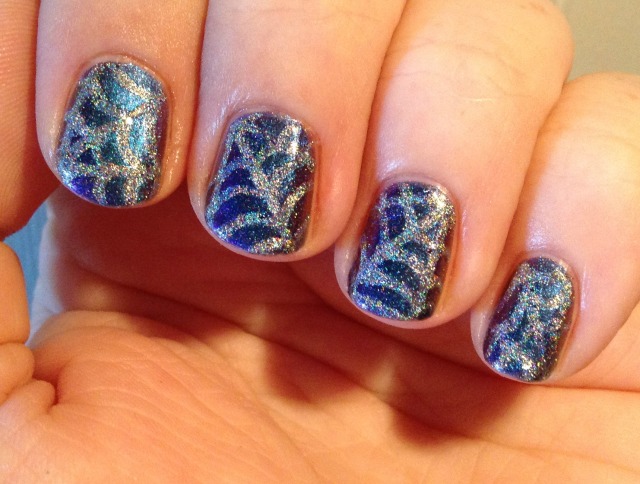 This is not the first time I have attempted a spiderweb design, although this is absolutely the best it has ever turned out. Like stars and leaves and anything vaguely “real,” depictions of spiderwebs do not seem to be in my wheelhouse, which is a shame, because my actual house (well, apartment building in which I own a condo) is positively covered in them. Covered in the spiders that made those webs, too – something about the grooved stone cladding on the outside of my building makes for some very desirable arachnid accommodations. I apologize if you’re spider-phobic and feeling uncomfortable with this discussion. You’re going to like it even less when I note that these spiders are like extras from the Lord of the Rings crossed with Harry Potter.

So webs aplenty, and now they’re on my nails as well, in shimmering silver (Liquid Sky Lacquer’s Dream) on a bed of multichromatic blue (Enchanted Polish’s Across the Universe.)

Continuing with this week’s unintentional theme of autumnal nail delights, here’s a super seasonal manicure that reminds me of the cut-down, Canada goose-filled corn fields I pass every day whilst out and about living my life (and if you’re wondering what kind of godforsaken, bird-plagued borough I live in – the other day it was turkeys, today it’s Canada geese – eastern Ontario!) Those fields are filled with the dried up, broken-off remnants of this summer’s bounty and, of course, about 200 plump geese gorging themselves silly for their flights down south (seems counter-intuitive to me, having a great big meal before a long flight, but clearly they know something I don’t!)

The hay or dried out, fieldy bits (actual technical term) in these nails comes courtesy of China Glaze’s Rest in Pieces, a predominantly copper-hued glitter topper from last year’s Halloween collection. I never really warmed up to this polish – something about the bar glitter (messy!) and the fact that it presents well over virtually nothing. Except for this manicure, where I of course think it looks AWESOME! Really, why did I not jelly sandwich this one sooner, especially when I’ve got Nfu Oh’s rich, butterscotch-hued jelly, JS39, on standby? The clear, lush simplicity of the jelly polish showcases Rest in Pieces beautifully, while tamping down some of the harsh holographic edges that tend to make it look just a tad “too much.” Very nice. 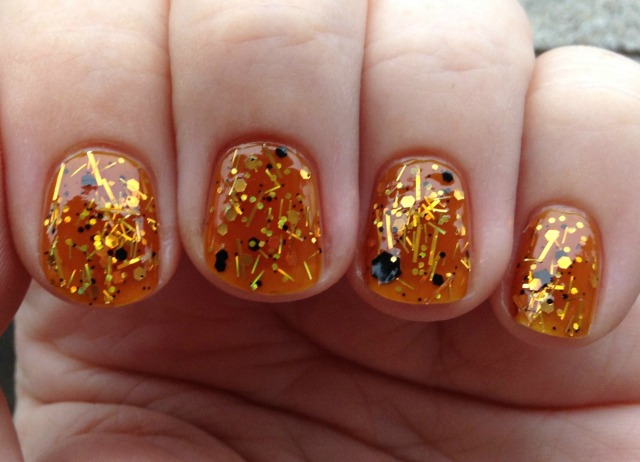