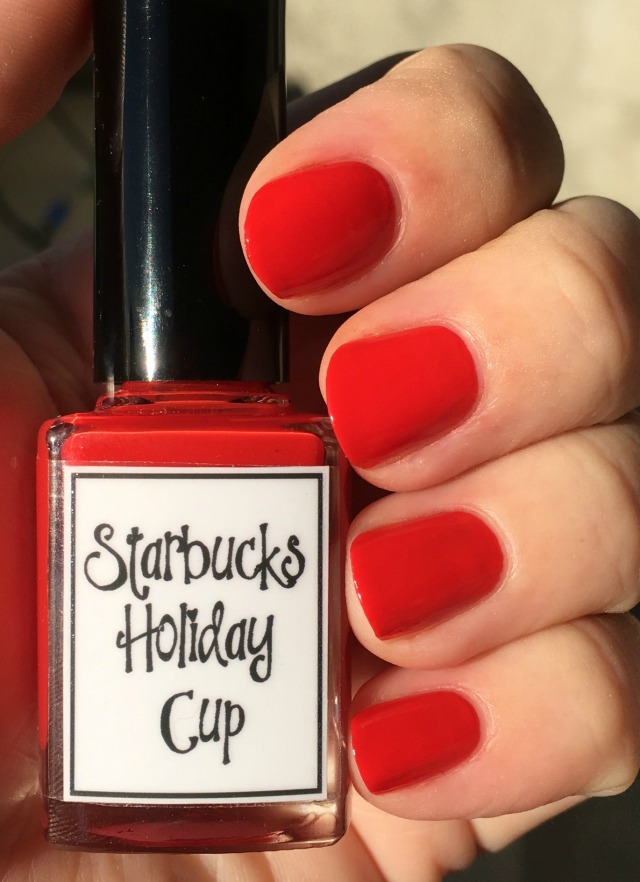 Earlier this month Starbucks created a bit of a stir after releasing the design for their 2015 holiday cups…which really proved to be no design at all, the simple red cups bearing no embellishments save for the green and white Starbucks logo.  This was taken as a slight against Christmas by some of the touchier types (how about a slight against design sense?) and sparked a brief, but furious, round of pearl clutching that has more or less dissipated by now.  For what it’s worth, I don’t view the plain red cups as a volley lobbed in the War Against Christmas.  I’d say it’s more a financially-motivated move to appeal to as wide a religious (or non-religious) coffee-drinking demographic as possible, no more, no less.  You know, just plain, old fashioned greed as opposed to a deliberate tactical move.

But the potential for some gentle ribbing at the expense of the scandale du holidays 2015 proved to be too great, even for the indie polish manufacturers. And so here’s Whimsical Ideas by Pam’s Starbucks Holiday Cup, a gorgeous red creme, straight-up, no embellishments.  Pam is best known for her glitter-stuffed Whimsies, colourful mega sparklers that pack a glittery punch, but Holiday Cup is a rich creme, her second in what I hope will become a continuing collection, because they’re just lovely.

Clear and deep, Starbucks Holiday Cup is a classic ruby red that flows onto the nail nicely and dries down quickly to a beautiful, glass-like shine, with absolutely zero need for a topcoat.  In fact, I didn’t use a topcoat for these photos, and I NEVER do that.  Just beautiful!  Here I’ve shown four coats, simply because I recently quite badly stained my nails, and green gunge has been showing through all of my manicures for the past week.  This one proved to be no exception.  Ah, consistency!