At the end of last year – you know, 18 whole days ago – I purchased a number of bath time goodies from Lush, including this colourful cutie, a bath bomb by the name of a Luxury Lush Pud. 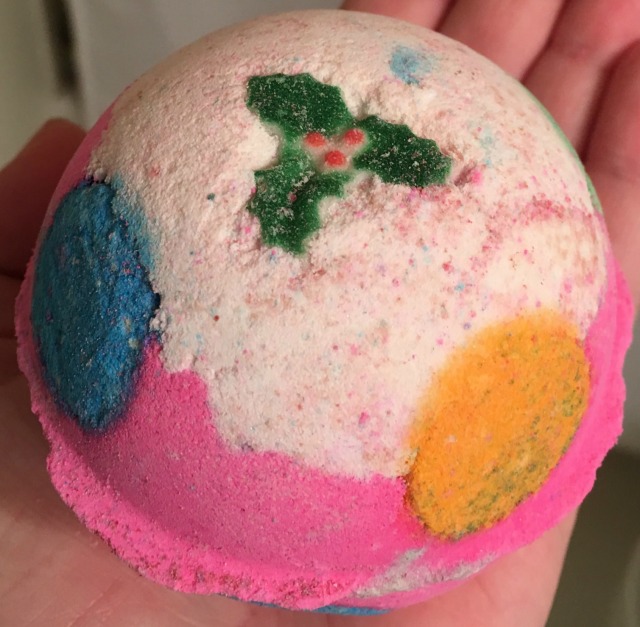 As I already noted here, I think the main reason I purchased this bath bomb is because I delight in its silly name.  “Pud” is just such a funny word, is it not?  Because bath bombs and other assorted bath time products are typically not my jam.  I’m predominately Team Shower, in no small part because my bathtub is quite tiny and really can’t accommodate me AND a metric ton of bath products.  But the Pud was too cute, and I was powerless to resist its rainbow-hued charms (or the many, many 30 second videos I watched on Instagram of Puds spinning about a tub) so into the virtual shopping basket it went.

So how did the little devil perform?  Not super well!  Although in defence of the Pud, I ought to note that I loaded up my tub with bubbles before dropping in the bath bomb, and I suspect they kept it from doing its thang to its full potential.

Because my Luxury Lush Pud was a bit of a dud.  I’ve heard of “deactivated” bath bombs before – anything that relies on a baking soda-based reaction has the potential to go bad, particularly if the product is stored in a humid place like, say, a bathroom (mine was not.) It’s not a total deal breaker, but when you’re paying $6.95 for a single use product that falls squarely into the “This is a special treat” category, you really want it to perform as advertised.

My lavender scented bath bomb just sort of sank to the bottom of the tub, and then after 30 or so seconds, a thin ribbon of cotton candy pink began to wind its way through the bubble layer.  After another 30 seconds, the little coloured discs on the Pud broke off and drifted into the creamy, bubbly pink, leaving pastel-coloured rainbows in their wake.  So pretty!  Total unicorn bath.  But again, not quite as advertised.  At its very best, I had a one-foot by two-foot patch of creamy pastel rainbows directly in the middle of my tub – quite different from the videos I saw of bath bombs zipping merrily about a gigantic Jacuzzi tub.

I realize I’m harping on a lot here about looks.  That’s because a bath bomb is a bath bomb is a bath bomb – baking soda held together with essential oils.  Which is something you can DIY perfectly well on your own at home, without the $6.95 price tag.  So in this case it really does come down to appearances.  And while the Lush Pud is darn adorable in solid form, its reality ultimately didn’t quite live up to its promise.