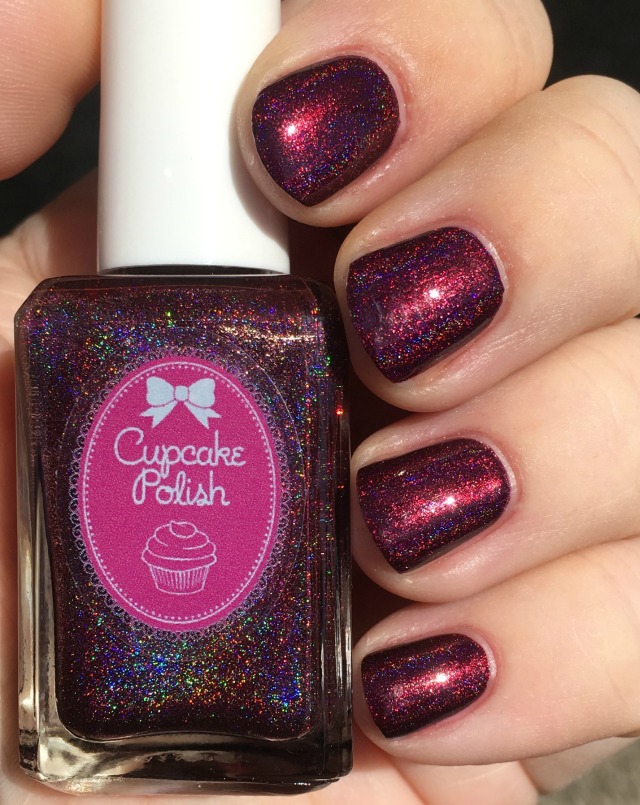 I’ve had my eye on this holographic lacquer, Cupcake Polish’s Blood Hound, for ages now, so when Harlow & Co. recently restocked it, as well as a number of other Cupcake Polish goodies, I jumped at the chance to finally snag a bottle.  From browsing the photos on the website alone, I became positively smitten with Blood Hound’s blackened plum holo shot through with intense blue shimmer.

Slight problem: The Blood Hound I received looks only vaguely like the polish displayed on the website.  That electric blue shimmer?  It’s actually copper.  When this polish hits the sun, the blues in its holo are more prominent than the other colours in the rainbow spectrum, true, but that’s not quite the same thing as that almost electric, lit-from-within look. 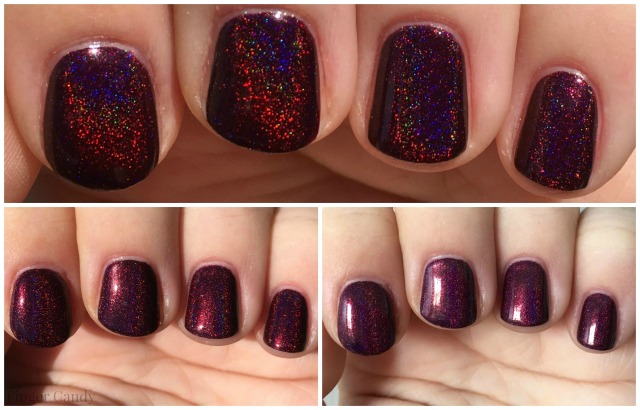 Make no mistake, this is a beautiful polish, and it has a super one-coat formulation as well.  The darkened plum colour is lovely – vampy and deep, with lots of gorgeous glowing shimmer.  And that holo effect is just bananas.  As a first-time Cupcake customer, I’m very pleased with the polish itself, even if the Blood Hound I received was not quite what I was expecting.  But this is really a function of colour alignment across computer monitors, an area that is leaps and bounds better than it used to be, but still has its weak spots. Blues, purples and turquoises in particular often look like anything other than what they actually are, so I’m not surprised I had some problems with this polish.  Buyer beware and all that good stuff, but Blood Hound is just gorgeous regardless, and I ain’t kicking it out of bed.