Also known as “Use it or lose it.”  So last year, annoyed at the sheer amount of actual AND mental to-dos I had piling up (shelves of unread books, boards full of to-be-made recipes on Pinterest, drawers stuffed with beauty products I was either hoarding or – more likely – had just totally forgotten about, reams of nail polish I was saving for a special occasion) I decided it was time for less talk, more rock.  As in, stop talking about the things I wanted to do (or make or read or apply to my hands and face) and actually rock them.

And so I did.  And can I tell you guys, it has really been one of the most rewarding decisions I’ve ever made. Stuff is actually getting done!  The mental clutter has been tidied!  Actual physical clutter has been tidied! And I’ve been enjoying all sorts of fun new experiences, simply by finally doing the things I’ve been putting off for so long, whether it’s trying out a new recipe, burning through – some might say enjoying – my wax collection, testing new beauty products, watching a new-to-me TV show or working on a fun crafting project.

But perhaps my favourite thing of all is that all this hopeful productivity is downright contagious. Doing stuff apparently begets other stuff, because I suddenly have quite the fire lit under my arse, one encouraging me to put to bed all of the little home renovations my husband and I have been putting off for far, far, far too long. It’s actually a really pleasant feeling.  I love going to bed knowing that I did something with my day, even if those somethings were tiny and seemingly inconsequential – to me, crossing those items off my mental to-do list make all the difference.

So in the spirit of my not-so new-found philosophy of “If you’ve got it, use it,” I thought I’d dig out these glittery Incoco nail strips in Sweet Sundae I bought some years ago.  Pale pink and speckled with rainbow-hued bar glitter, I was not only hoarding these strips for a special occasion, but I had also forgotten they even existed – a double whammy against the “Use it or lose it” approach.  I had a bit of difficulty with some other Incoco nail strips last month (they were nearly completely dried up) and I worried that I might be running into the same problem with Sweet Sundae, but there were no issues – they applied beautifully. My good luck.  Next time, hopefully still with my positive philosophy in mind, I’ll use them long before I’ve ever been given the chance to forget about them!

Life’s a funny thing sometimes, isn’t it?  Just the other day I was wondering if one of my favourite childhood books, Bunnicula by James Howe, would be appropriate for a friend’s seven-year-old mega reader.  Published in 1979, Bunnicula (and a couple of follow-up books; it was a three-part series) tells the story of the Monroe family and the small, frightened bunny they adopt after finding him at a theatre during a showing of Dracula. Dubbed “Bunnicula,” the new recruit joins a menagerie of animals at the Monroe home that includes patient, wise and understanding Harold the dog and Chester, a conspiracy theorist cat who is deeply suspicious of his adorable new roommate.  Suspicious enough that when vegetables begin appearing in the kitchen pale, lifeless and drained of their juices, Chester immediately declares Bunnicula an actual vampire.  Shenanigans ensue that may involve Chester trying to off Bunnicula by throwing a steak on top of him as opposed to, you know, staking him.  It’s all so cute.  I adored those books.

So as these things go, I decided to do some nail art honouring Bunnicula and his juice lust. But it’s been about 20 years since I’ve even laid eyes on those books, and I couldn’t remember the names of the pets or even Howe, the author, so off to Wikipedia I scrolled. That’s when I discovered that just this past February The Cartoon Network began airing an animated Bunnicula show!  I understand it’s not quite MY Bunnicula – this show apparently depicts a rabbit that was the beloved pet of Dracula – but how weird is that?  I haven’t thought about the Bunnicula world in decades, and suddenly in the span of two days I can’t get away from it.  Life’s just odd like that, I guess.  I mean, not vampire bunny odd, but odd just the same.

For these nails, I decided to depict Bunnicula in his natural state – mid-drain, some of his victims lying nearby, pale and lifeless.  I particularly like the carrot juice droplets hanging from his two front fangs.  I do wish he didn’t look quite so demonic (smeary topcoat just makes everything great) but it definitely fits.  Still, better beets than blood, right? 😉 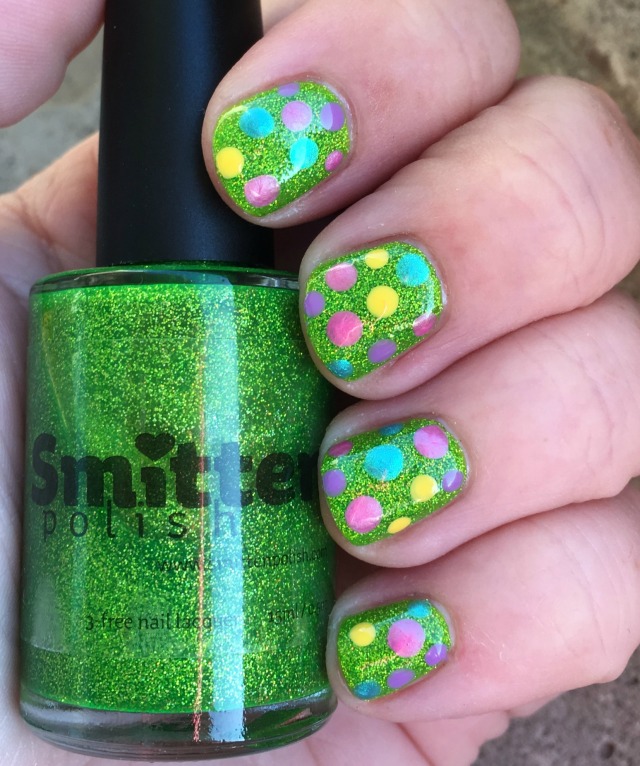 Ugh, not those kind of leavings, gutterface, although I suppose I should have clarified – here I’m talking about Easter Bunny leavings.  Totally different thing!  Doing a manicure inspired by one is adorable and festive.  The other suggests some latent scatological leanings that I may need to address.  Still, although I’ll paint all manner of subject on my nails (the Guacamonut still ranks up there as a random favourite), I can guarantee you that shit will absolutely never be one of those things.  Sorry if you were hoping for this blog to take a deeply dirty turn at some point.

Okay, back to this end-of-the-day Easter manicure.  Not Your Mama’s Easter Grass from Smitten Polish (now Dreamland Lacquer) is the star of this show, acting as a very artificial-looking base for a smattering of pastel-hued, eggy dots.  I love this polish in the sun, its gold glitter twinkling prettily with every shift of my hands, but Not Your Mama’s Easter Grass does its very best work in the shade, taking on a look not unlike a Pointillist painting.  Or, going to the other end of the cultural spectrum, Floam.  I love it, I love it, I love it, AND it just happens to look great alongside some sweet and simple nail art.  The Bunny would approve – a more than fitting spot to park his bounty. 🙂 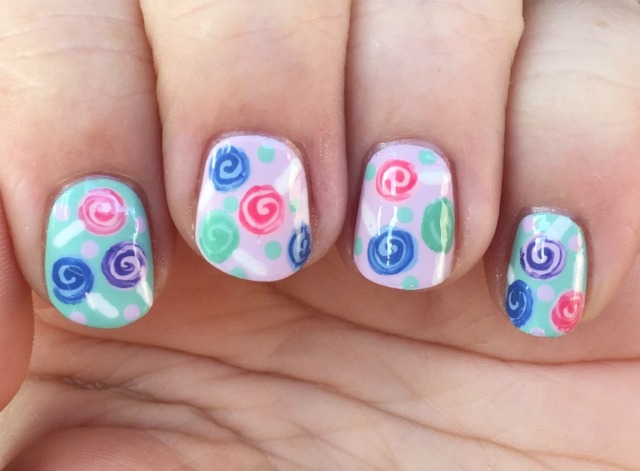 Late last year, right around the Christmas holidays, I went through a period where I was just klutziness personified.  In the span of about three weeks, I accidentally dyed my nails bright green, nearly throttled myself with a shapewear cami and – my favourite – gouged a great big chunk out of the inside of my cheek whilst making the “Pop!” sound in the 1950s Chordettes’ song, Lollipop.  Holy crap, you guys, was it PAINFUL! And completely preventable, had I remembered that my nails are now as sharp as a cat’s and I WILL wound myself, because that’s just what I do.  You’d never, ever know that I took about 20 years of dance and can be somewhat graceful (just apparently not around green nail polish, shapewear or novelty songs from the 1950s.)

Ba-dum *ching*!  Happy Easter weekend, friends.  Hope you’re hoppin’ about with your friends and families having a wonderful time.  I’m inside, where an indoor kitty like me prefers to be anyways, working on my nails and just enjoying some downtime with Mr. Finger Candy, so I’ve already got that good time situation sorted. May you enjoy yours, wherever you are and whatever you’re doing. 🙂 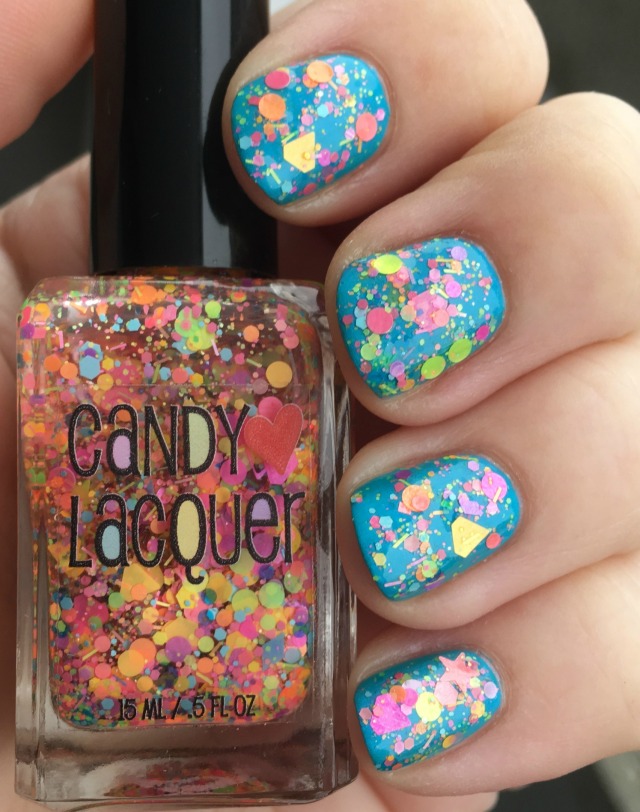 Well, this is just a whole load of manicure!  But I do love the ultra vibrant combination of Candy Lacquer’s Ring Pops glitter topper over Ceramic Glaze’s shimmery turquoise Mermaid’s Tale.  I’m also so over THE RETURN OF WINTER (at half measure, true, but with the end thisclose and just in sight, today’s snow and freezing rain feels like a big setback) and this is my way of rebelling.  TAKE THAT, idiot winter!  Feel my well-manicured wrath and TREMBLE!!!  Or just continue pissing icy, sleet-y, dangerous-to-drive-in stuff all over my city this Easter weekend.  I guess that works, too.

Matte floral nails never fail to remind me of one of those ornate, “Do not touch!” teacups your grandmother has on the top shelf of her china cabinet.  Behind glass.  And beside a commemorative decorative bell she and your grandfather received as a present at their 50th wedding anniversary party.  At least that’s the ideal, right, to be so happy with your one and only, one day you’ll qualify for that decorative bell to place beside the “Company only!” teacup?  I like to think that’s the ideal, at least. 🙂

Triangle pointes, I suppose that should probably read (and in a few instances, something that could most charitably be described as one of those chubby aluminum trees Charlie Brown passes up in favour of The Little Tree That Could.)  Free-handed, as always, because I know no other way.

Getting way up close and personal with this flaked-out manicure that was little more than an excuse for me to muck about with a fun, colour-shifting polish and my neglected macro lenses.  And this flakie, Polish Me Silly’s multi-chromatic Party Hearty, is an excellent candidate for the job – it just looks so cool mega magnified, particularly the larger, slightly raggedy rainbow bits.  Love this fun, experimental look. 🙂

Aw, cheer up, little guy – you’ll get there eventually (don’t tell him, but actually, he won’t – they’re completely different varieties of cacti!  But at least he has that fly pink ‘do, right?  Silver lining, bro.)