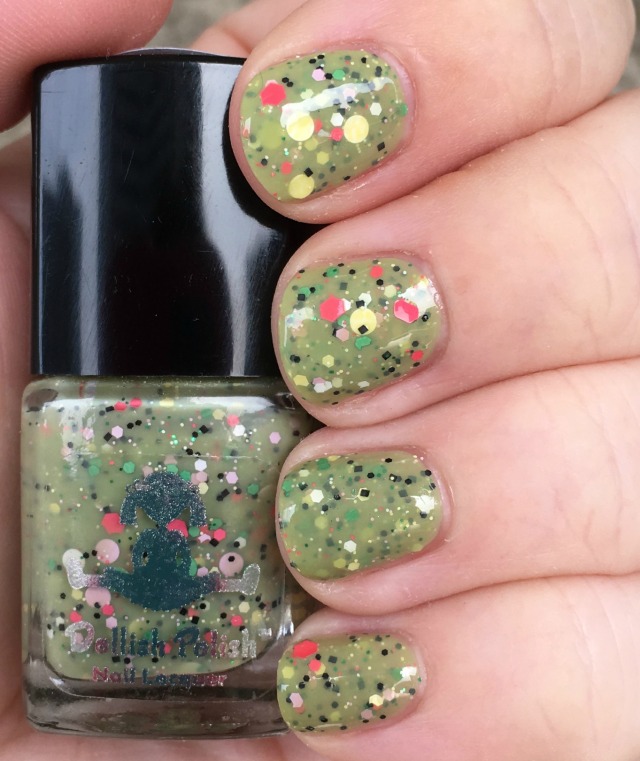 Who knows, maybe if Lizzie had been into nail art instead of murder, zombie playtime and just generally going insane, things might have worked out differently for her.  And am I really making a joke about one of the most devastating moments in The Walking Dead, one that ends with (SPOILER) the execution of a child?  Yes. Yes, I am.  Because I’m apparently just as cold and shut-down as Carol (blasphemy – Carol is an apocalyptic rage goddess, and I’d really like it if she and Daryl would just start making out already.)

The Walking Dead airs on Sunday evenings, and so I thought Monday morning would be a good time to pull out this fun lacquer, Dollish Polish’s Look at the Flowers, Lizzie.  Chase away the Monday morning, post-apocalyptic blues and all that good stuff.  I love this polish, because it works in spite of itself.  I mean, it’s little bits of flesh-hued glitter suspended in a snot green jelly base – attractive!  Except it is – very much so – with a nice, not-too-goopy formulation as well.  The perfect polish for the zombie slayer on the go!

12 thoughts on “Look at the Polish, Lizzie”