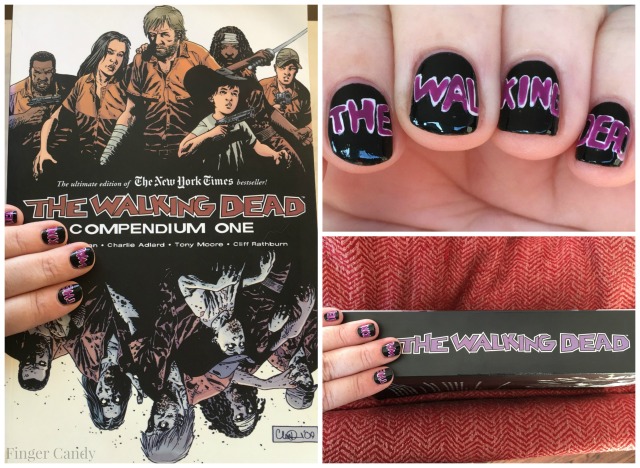 After kicking off my friend Julie’s reading challenge with my favourite novel, The Virgin Suicides, an ultra light and breezy choice (sarcasm), I thought I’d lighten things up a bit by diving into the comic book world of The Walking Dead, where of course nothing bad ever happens and everyone lives in perfect happiness perfectly, forever and ever (further sarcasm.)

The second challenge prompt called for a book inspired by art and literature, be it art history, a book on technique or, say, a comic.  I went the comic route, seeing as The Walking Dead Compendium 1 is right on my bookshelf (as is 2, for that matter), and as a casual viewer of the show, I’ve always been a little curious as to the similarities and differences between it and the books.

Compendium 1, a MASSIVE, forearm-taxing beast written by Robert Kirkman, Charles Adlard and Tony Moore, clocks in at 1,000 pages and covers the first 48 issues of the comics.  Save a childhood obsession with the graphic novel Tales From the Crypt, comics as a storytelling format have never really been my thing – I prefer novels.  And indeed, I had a bit of a hard time getting into a decent reading rhythm with the comics, with the dialogue either entirely absent (Rick waking up from his cop coma) or spurting from characters like word vomit (pretty much anyone upon introducing themselves to THE GROUP; after that you won’t hear from them again until they die.) Which might just be the style of comics in general, although if the show is any indication, I think that one may be particular to The Walking Dead.  I also found there to be a weird condensing of seemingly-pivotal moments (Rick’s awakening, Shane’s death, THE GROUP’s introduction at Woodbury) in favour of endless scenes of morality talk (but again, that might just be The Walking Dead.) 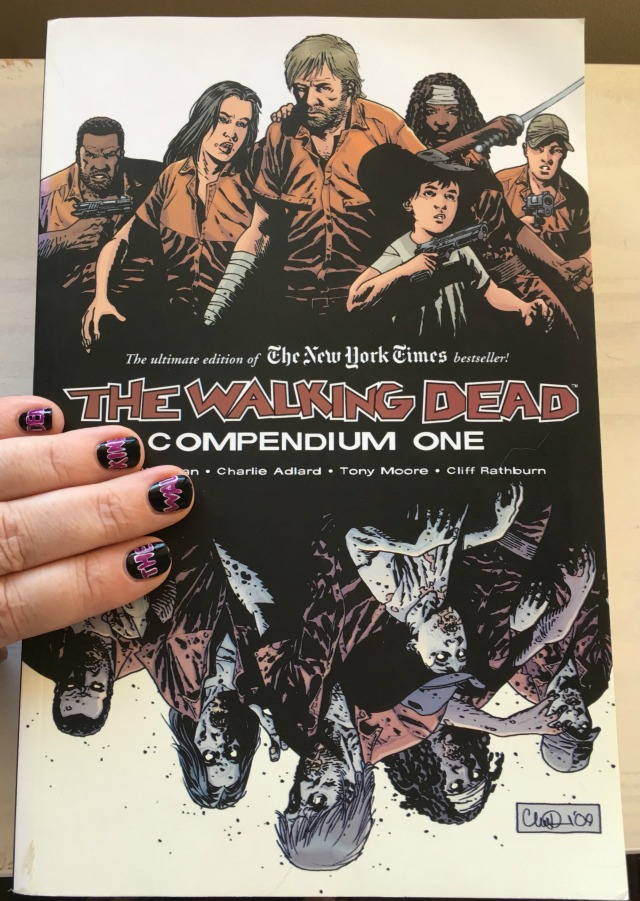 But after an initial period of hesitation, I started really, really getting into the story, digging hard on the parts where the book and the show would intersect and then deviate once again (Carol and Tyreese!  Super unhinged Hershel!  Sexy Dale and Andrea time!)  It was all going so well.

Where the comics lost me, though, and where I ultimately stopped reading, was with the introduction of Woodbury.  Fans of the show will remember that during the third season a new villain was introduced by the name of The Governor.  Completely insane by any definition of the word, The Governor of the TV show was an authoritarian psychopath with fish tanks full of walker heads in his livingroom, a zombiefied daughter in the closet and a super big hate-on for Rick Grimes.  So not a good guy.

But The Governor of the books is the WORST guy, a violent and sadistic rapist who cuts off Rick’s hand within about six frames of meeting him (there’s that pacing thing I was talking about) and gleefully, and repeatedly, assaults Michonne over PAGES.

So when the books – which to that point had been bleak, yes, and shocking, also yes, but still very much in keeping with the PG-13 tone of the show – took a hard, hard turn into ultra heavy sadism (there is one image I wish I could unsee that will haunt my dreams forever) I checked the hell out.  I feel like there may have been a switch in authors at this point, the change in tone – and not one for the better – is just that jarring and unpleasant.

So The Walking Dead Compendium 1 and I parted ways at about the halfway mark.  But as always, I had to do a bit of nail art to go along with my choice of book, this time a mani showing off my ultra tiny lettering skills, because every other option was just too depressing or inappropriate.  Which is just The Walking Dead for you (I should create a macro for that phrase.)

Oh, for god’s sake, Barbara, we got our jabs when we went to the Isle of Wight! ;) Just doin’ my vaccine part. Bonus: I’m now one-dose zombie-proof. That’s how it works, right?
Good morning! Beautiful day for these two poos to head back to bed.
Growing tulips has been soooo frustrating (effin’ 🐿s that just nibble off the heads right as they’re about to bloom have been the bane of my springtime existence) but when I bring in a big, beautiful bouquet like this that I grew in my own garden, ah, it’s (nearly) all worth it! Here we’ve got two kinds of black blossoms, Queen of the Night tulips and ruffled Black Parrot tulips, nestled alongside some perfectly pink Fancy Frills. I got all these bulbs from @brecks_bulbs, and they’ve been nearly universally gorgeous when they bloom (shakes fist at mere thought of squirrels, regardless.)
Despite the squirrels’ very best efforts to make merry with my precious tulips, I! have! mostly! prevailed! Let’s see, what have we got here…bunch of purple Queen of the Night and Black Parrot tulips, ruffled pink Fancy Frills, some blue and hot pink Showgirl tulips, couple of Angelique tulips (or is it Guinevere? it might be both) and a mess of star-shaped Peppermint Stick tulips. Also those yellow and red guys.🌷🌷🌷
Hey there, lads and ladies, I grewed you! And I had to bring you in way too early because of a way too late snowstorm, but look at how beautiful you are! These are gorgeous, gorgeous blooms from @brecks_bulbs; just the loveliest, plushest blossoms. 🌷💐🌷
Not proud/proud that we ate nearly all of these delicious @doughbaby.doughnuts donuts over the course of three days. I did give two away, and there are two for breakfast tomorrow, but otherwise...! Any guesses as to which were our favourites? Starts with an R and ends with Aspberry Lemon. ;)
Took every ounce of my willpower not to dry hump my new leaf blower/sucker like the Valkyrie in Thor Ragnarok.
My blogging buddy, @the_scented_library, sent me the most thoughtful gift (delicious scented wax goodies!) including this adorable little edition of my favourite book, The Virgin Suicides, which makes it extra super thoughtful, because she effin’ loathes it! Thank you for compromising your literary morals for me, Jay. :)
@slicheson, you are the BEST people! Thank you again and again for the thoughtful b-day surprise from @chocofavoris; it made my day, week, month, year (admittedly low bar on that one.) I knew you were a good choice of BFF; glad you didn’t kick me to the curb in high school when I inexplicably made it my mission to see if I could get us both kicked out of world issues class every single day.) 🍪🍦🍪
Loading Comments...
Comment
×
%d bloggers like this: