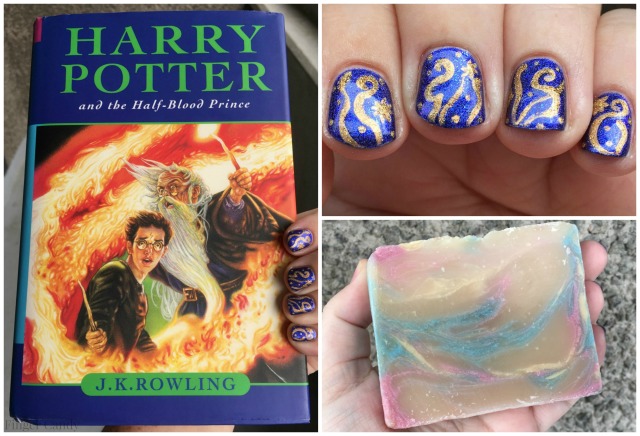 Being one of maybe only half a dozen people in the entire world who had not yet read Harry Potter and the Half-Blood Prince, the second last book of the Harry Potter series, I thought the theme of magic and fantasy in my friend Julie’s reading challenge was the perfect time to rectify this literary shortcoming.  And then, as always, I did some thematically-appropriate nails, this time a swirly, twirly, free-handed mani inspired by Felix Felicis, the good luck libation Harry wins for his extracurricular activities in Potions class (which just might include whipping up this delightful Every Flavoured Bean sudser from Dreaming Tree Soapworks.  That or, you know, accidentally flaying Malfoy alive in the girls’ toilets.) 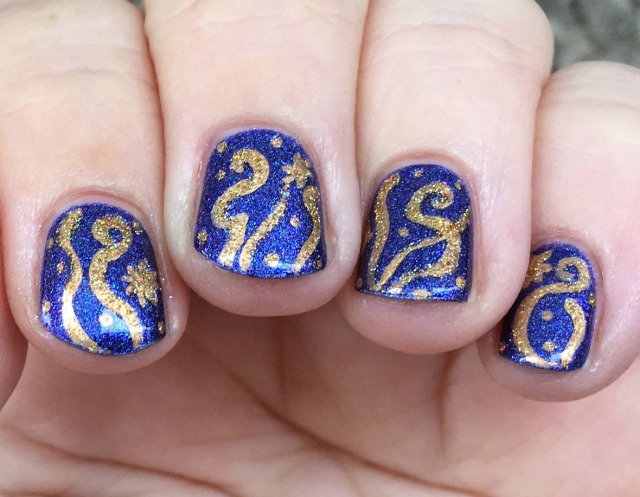 So what did I think?  I actually found it VERY slow going.  Until things really began to take off in the final 100 pages, much of Harry Potter and the Half-Blood Prince felt as though it was treading (Inferi-logged) water – Ron’s got lady troubles, Harry’s got friend troubles, Dumbledore’s got Horcrux troubles, Malfoy’s screwing around in the Room of Requirement and Slughorn’s being obstructionist.  Lather (with this fun soap?), rinse, repeat. 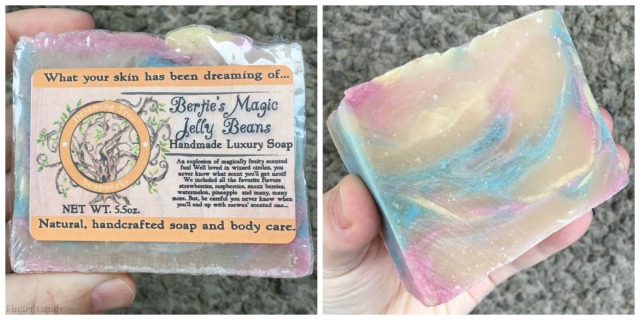 Yet despite believing that the story could have used a bit of trimming, I ultimately find no fault with its fans for wanting to spend as much time as possible in Harry’s bewitchingly magical world.  It’s such a special place; I don’t mind treading water for that (just not that skanky lake water filled with dead bodies; damn, Rowling, things got real dark real fast! Thank goodness for that glowing green light out in the middle of the lake.  Let’s just grab this invisible chain and haul ‘er up and see what we’re dea– oh.  Holy hell, Rowling, why the nightmares?!)

14 thoughts on “Literary Inspiration: Harry Potter and the Half-Blood Prince”