Welcome back to the September Band of Bloggers! It’s that time of year again. School is starting back up. Trees are starting to turn. North America is recovering from the apocalypse brought on by the eclipse. Wait, what?

The eclipse that visited most of the United States on August 21st has been described as a once in a lifetime experience. The next eclipse to cover the US from coast to coast will not come until 2045.

That brings us to our question this month. What is your once in a lifetime experience?

Fifteen or so years ago (so another lifetime; in the case of my friends with children, many lifetimes) I was floundering.  Fresh off a journalism degree I wasn’t using and wracked with grief over the end of a four-year romantic relationship, I had moved downtown with some dear high school friends for a fresh start.  Except (probably much to the annoyance of my friends) I was having a terrible time starting over, at least for the first couple of months.  I’ve always been one of those serial monogamy types, and this was the first time since I had started dating at 16 that I didn’t have a boyfriend.  That the relationship had never been a grand one was totally besides the point, and despite the best efforts of my too-patient pals and parents, I was determined to be lonely and miserable, and I was obviously going to die alone and then be eaten by wild dogs.  It was all so very Bridget Jones.  I clearly needed to get the hell out of town.

At the time I was working as a court reporter.  Bored, terminally frumpy woman (they’re always women) clacking away in the corner of the courtroom?  That was me (except I liked to think I was fashionably frumpy.)  I worked out of an office that acted as a sort of neutral courtroom for the lawyers and their clients doing pre-trial examinations – that’s the deeply boring, paperwork-intensive side of the law.  They’d also frequently send reporters on out-of-office cases to such exotic locales as three blocks away, but sometimes to places a bit farther flung.

And THAT is how I wound up standing in the pitch black, -25 degree chill of a frozen Iqaluit afternoon three days before Christmas, contemplating the seriousness of the gigantic “DO NOT FEED THE POLAR BEARS!” sign that greeted me on arrival.

Iqaluit, for the unaware (and that would be everybody; Canadians barely know it’s there) is the capital city of Nunavut, a territory in the far north that used to go by the name Frobisher Bay.  It’s Nunavut’s largest city – nay, its ONLY city – and bears a population of about 7,500 people, most of them employees of the Government of Canada (that’s why I was there, to take the testimony of some people involved in a lawsuit with the GOC.) Despite sitting well outside the Arctic Circle, Iqaluit’s climate is a tundra one – lots of snow, little vegetation and no trees (the permafrost won’t allow their roots to take hold.) During the winter months (so everything that’s not June, July and August) it’s not unusual for the temperatures to dip into the -30s or -40s, and when I was there at the end of December, the sun had set to full black by two in the afternoon.  There is an ice road that leads out of town that is literally called The Road to Nowhere.  It is, by virtue of the unforgiving climate and its remoteness, a rather ugly city.  Also, there are apparently polar bears, and we are not to feed them. 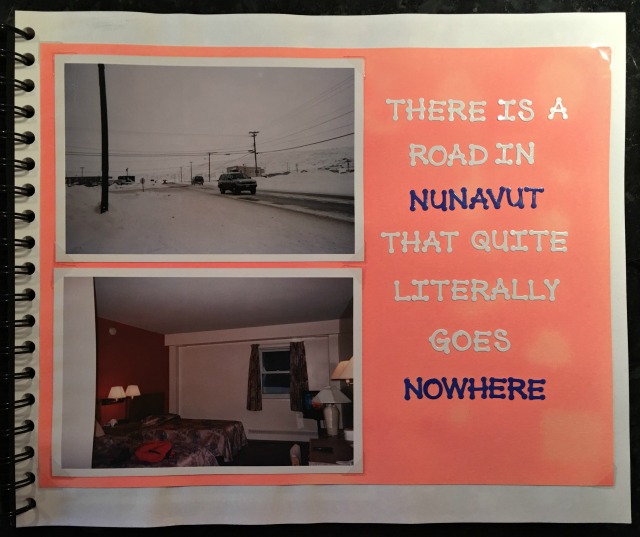 So what once-in-a-lifetime things does a fish out of Ontario water do when she’s thrown head-first into the frozen, turquoise waters of the far north?

Well, I did my job, for one, but even that came with its own “Only in Iqaluit” moments, such as when I stood outside the courthouse in the deep, snow-muffled silence of an early Arctic morn, sharing a cup of coffee with the courthouse clerk as he explained how this frozen spit of land had captured his formerly city-dwelling heart.  Or when I glanced out the window of the courtroom later on that day and saw a mangy dog dragging a severed caribou head down the street.

In hindsight, the entire trip was an exercise in surrealism.  My flight in was a delight, the likes of which I will probably never enjoy again – totally empty plane, save for maybe nine other passengers, three seats to myself, a really fantastic lunch, nice little post-nosh tipple(s) and a low, low approaching altitude that allowed me to gaze out the window at the wonder of all that neon turquoise water showing through the cracks in the ice and snow.

I walked the town in snowpants and Kodiak boots for three hours until I realized I had already seen everything.  I bought a $9 bag of potato chips at the North Mart (not making light of the very real problem of food deserts in the far north.)  I stood in a 6 a.m., two-person scrum (which itself was considered quite the turnout) as an accused murderer was brought to the courthouse.  I watched the sun rise at 10 am, cutting a weak, low path across the horizon, before setting to pitch blackness again three hours later.  I sat in my hotel room one night, blissfully crunching overpriced chips and watching silly teen movies on cable, and put together a scrapbook gift for a friend.  Every cab ride in the city cost $5, no matter where you were going or how long you were in the vehicle.  I shared a delicious breakfast of Arctic Char eggs benedict with a Justice of the Supreme Court of Canada in the diningroom of a four-star hotel at 6:30 in the morning.  Later on that day we marched up to the Subway together for lunch; at the time it was the best performing franchise in Canada, and was a top five contender for all of North America.

On the day I headed out of town, two days before Christmas, I joined a city-wide exodus of bureaucrats fleeing the frozen north for (barely) warmer holiday climes down south. It seemed like the entire city emptied out in about five hours.  After checking my bags and securing my seat home, I spent those five hours in a nearby coffee shop/karaoke parlour/tanning salon, where I sipped tea, ate a scrumptious blueberry scone and contemplated asking the proprietors if they’d be willing to rename their establishment the Fake ‘n’ Bakery.

On the flight home – no empty plane this time, that’s for sure – through a massive snowstorm, I experienced turbulence so extreme, I really thought my end had come.  I suppose that’s normal when your plane is bucking wildly from side to side and dropping what feels like 20 feet at a time.  Also when the cargo hold is packed full of howling dogs and screaming cats and the flight attendants suspend all food service when your chicken cordon bleu flies up to the ceiling and then just sticks there.

My favourite part of the trip, though?  Like everybody, coming home.  Seeing my parents’ smiling, relieved faces at the airport, and then walking through the door of my apartment late on the evening of the 23rd to find that my friends had prepared an amazing holiday dinner and decorated the molting ficus.  Home really is where the heart is.  No place like it, as Dorothy might say.

That, coincidentally, was the moment I decided to drop my whole “woe is me” romantic bullshit and rejoin the human race as something other than a mopey dick.  The people I loved were making every effort to boost my fragile self-esteem, and I could certainly do likewise.  Besides, I had just conquered the far north!  Severed caribou heads, man – that kind of thing changes a person!  Four fun-filled, glorious, halcyon months later I met Mr. Finger Candy, and the rest is happy history.

So there we have it, that once-in-a-lifetime event that I was actually fortunate enough to experience firsthand.  Never saw a single polar bear, though. 😉

If you’d like to play along at home, please feel free to answer this question in the comment section below, and we hope you’ll visit these Band of Blogger blogs and help support the blogger community!

Jaybird at The Candle Enthusiast

Julie at The Redolent Mermaid

Sandra – me! – at Finger Candy