Last Thursday evening Mr. Finger Candy came home, dropped his bag at the front door and said, “Let’s go to Disney World.  This weekend.  For our anniversary.”  And finally out of lameass excuses for why we couldn’t or shouldn’t – weight concerns, passports, finances, take your pick – I said yes.  Annnnnnddddd roughly 72 hours later we were standing in the Magic Kingdom!

‘Twas but a blitz of a trip, just a totally spontaneous handful of days, but we did manage to cross one of my LIFETIME bucket list items off the old roster in the form of 13 runs through the Haunted Mansion on Halloween, our 13th wedding anniversary.  The Mansion is rife with references to the number 13, and I’ve been taken with the notion of riding it 13 times in one day since I was about two years old; that this momentous event – yes, it was momentous! – took place on our 13th wedding anniversary, which itself falls on Halloween, was really just a matter of incredible timing.

Tips for tackling such an impressive undertaking? 😉  Get there early and bang out as many runs in a row as you can.  We got to 10 before I declared a (super)nature break.  When we returned an hour or so later, we had “adorable” matching mini-strokes when we saw that the Mansion was offline, but it was just a temporary blip – the 999 happy haunts who inhabit the Mansion were up and spooking within minutes, and we were on our way to our 13th.

Another useful tip for hustling your way through the Mansion is to look for the tiny red dot along the wall in the room of stretching portraits.  This is where the panel will slide back, leading into the main queue area.  Line yourself up with this dot and you’ll be in the perfect spot to sweep through the doors and straight onto a Doom Buggy in the time it takes your room-mates to even realize a door has opened.

Unlike virtually every other ride in the Magic Kingdom, the Haunted Mansion does not exit into a gift shop.  In fact, until about two or three years ago, the Mansion did not have a gift shop; you could find its wares set up on a Victorian era hearse just outside the gates.  Today you can find all Mansion merch around the corner at Memento Mori, the Mansion’s designated gift shop.  That’s where we snagged a few souvenirs to commemorate our trip, our anniversary and 13 completed runs through the Mansion!

2017’s limited edition Haunted Mansion Magic Bands seemed in order.  “Okay, yeah, so they’re cool and all,” you may be saying to yourself, “but Sandra, what precisely are you two numbskulls going to do with a parks-specific RFID reader anyways?”  Well, take it back to Disney, for one.  We’re already planning another trip as early as Christmas. 🙂  If you stay on property at one of Disney’s resorts like we did – Port Orleans Riverside, and lordy, it was GORGEOUS! – you get a plain jane Magic Band that acts as your everything – room key, park admission, FastPass-getter, credit card.  It’s a nicely comprehensive little system.  Also an absolute nightmare for anyone with qualms about “governmental” oversight or the deep surveillance state.  Not sure what to say to those folks except a Disney vacation is absolutely not for you.  Your every move is being tracked and analyzed by the House of Mouse; accept this or perish (Wired published a great piece on  Mickey’s Magic Band tech here.) 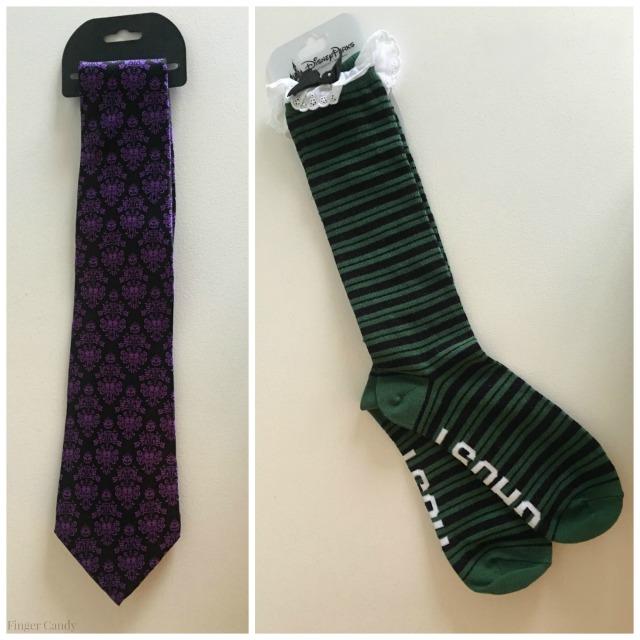 Items that will perhaps get a bit more everyday use include a damask print tie for my husband and some cool Mansion maid socks for me.

And I couldn’t say no to a couple more items in the Mansion’s iconic damask-with-eyes wallpaper, including another pair of socks (can’t ever have too many) and a waterproof, super lightweight backpack that proved invaluable over our two days at the Magic Kingdom.  This sucker really fits a lot!  It also glows under black light, which is absolutely not why I purchased it in the first place (yes, it absolutely is!) 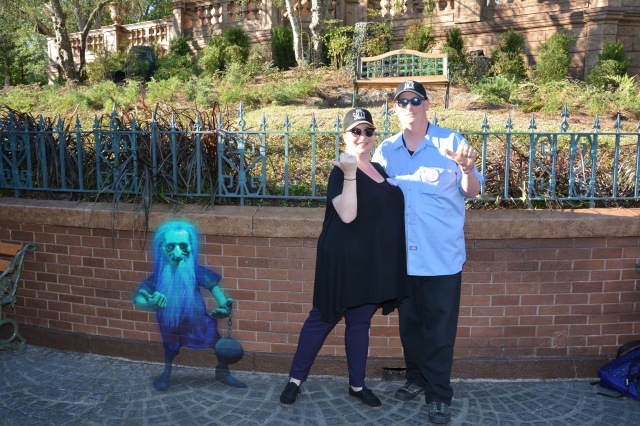 All fun and merch aside, though, it was an amazing day – a top three-er, no hesitation!  Really, how many of us get to say we completed a pretty nutso, lifetime bucket list item, and on a special anniversary, no less?!  This happy person, that’s who. 🙂

And none of this fabulous, fantastical – phantasmical? – fun would have been possible without being married to this incredible guy.  I highly recommend it.  He’s the Jack to my Sally in that I often have to keep him from enthusiastically spinning off into another dimension, but when he pulls me along for the ride, it’s always a wild and wonderful one.  I had the bestest time with my bestest friend. 🙂  A once-in-a-lifetime experience…although we’re already relishing the possibility of making it a multiples-in-a-lifetime experience.  To the next 13!

22 thoughts on “Thirteen Rides Through the Haunted Mansion on Our 13th!”

Throwback to some pretty underwhelming Dole Whip. P.S. Like your tits in that top.
Good morning from a couple of curious kitties sunning themselves by the window, some yummy local treats to power us through a day of yard work courtesy of @thirstymaidencafe and @suzyq.doughnuts, and a few quiet moments outside with a real old literary classic.
Happy 626 Day from this amorous little scamp, who always blessed me with a sweet, slobbery alien smooch.
Good morning (whoops, nearly afternoon) from these yummy treats I nabbed today from @thirstymaidencafe. Come on out to the west end and plunk yourself down on their cute little patio, though I grabbed my iced tiramisu latte (and friends) and ran. Support small independent businesses, particularly the ones that deal in caffeine and funfetti scones!
Oh, for god’s sake, Barbara, we got our jabs when we went to the Isle of Wight! ;) Just doin’ my vaccine part. Bonus: I’m now one-dose zombie-proof. That’s how it works, right?
Good morning! Beautiful day for these two poos to head back to bed.
Growing tulips has been soooo frustrating (effin’ 🐿s that just nibble off the heads right as they’re about to bloom have been the bane of my springtime existence) but when I bring in a big, beautiful bouquet like this that I grew in my own garden, ah, it’s (nearly) all worth it! Here we’ve got two kinds of black blossoms, Queen of the Night tulips and ruffled Black Parrot tulips, nestled alongside some perfectly pink Fancy Frills. I got all these bulbs from @brecks_bulbs, and they’ve been nearly universally gorgeous when they bloom (shakes fist at mere thought of squirrels, regardless.)
Despite the squirrels’ very best efforts to make merry with my precious tulips, I! have! mostly! prevailed! Let’s see, what have we got here…bunch of purple Queen of the Night and Black Parrot tulips, ruffled pink Fancy Frills, some blue and hot pink Showgirl tulips, couple of Angelique tulips (or is it Guinevere? it might be both) and a mess of star-shaped Peppermint Stick tulips. Also those yellow and red guys.🌷🌷🌷
Hey there, lads and ladies, I grewed you! And I had to bring you in way too early because of a way too late snowstorm, but look at how beautiful you are! These are gorgeous, gorgeous blooms from @brecks_bulbs; just the loveliest, plushest blossoms. 🌷💐🌷
Loading Comments...
%d bloggers like this: