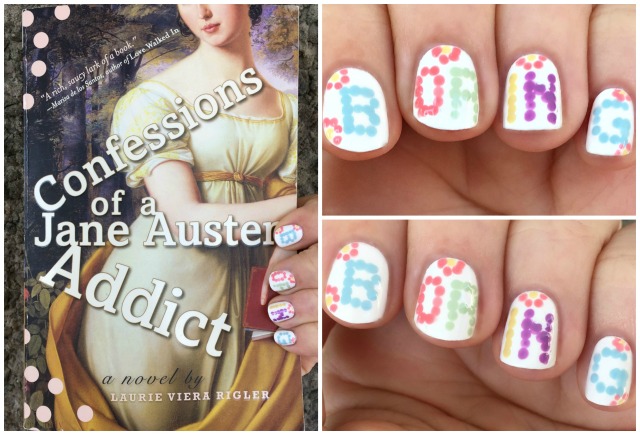 As Bon Jovi would say, this is my confession: I didn’t particularly enjoy Confessions of a Jane Austen Addict, I’m not sure why I read it (other than it fulfilled the required theme of “A tale where the main character loves to read” in my friends’ reading challenge) and I wouldn’t read it again.  It was silly, dull as dishwater and completely and utterly lacking in wit.  Confessions was a tepid recreation of any one of Austen’s novels about headstrong young women of means boxed in on all sides by romance, propriety, social convention and Georgian Mommy Dearest, with a dash of Invasion of the Body Snatchers.

Goin’ a bit harsh here, perhaps, but this book was as boring as any one of the innumerable scenes of our heroine (*pulls out book and looks for the main character’s name, because it’s already gone*) Courtney Stone needlepointing her way through a situation that has somehow resulted in her becoming a Jane Austen-type character in Regency England.

Annnnndddd I was about to explain the hows and whys of how that came to be before I realized it just doesn’t matter.  Despite declaring herself a major Austenite, Courtney – Jane Mansfield now, seriously – has no idea how to navigate this world of intricately choreographed social convention, not even with the perpetual threat of blood-letting, institutionalization and her mother’s cruel threats hanging over her head.  So she sees no problem whatsoever in carrying on as though she’s still Courtney, confusing and worrying absolutely everyone with her talk of modern products and concepts, or mixing up the names of the many, many men who have apparently done her wrong.  There’s TWO half-baked love triangles in Confessions, one in Courtney’s past-present and then another in Jane’s present-past, and I didn’t care about either of them.  Arguably neither did the author, Laurie Viera Rigler, because the driving conflict of one is resolved in a three-page epilogue, and the other is never addressed at all. 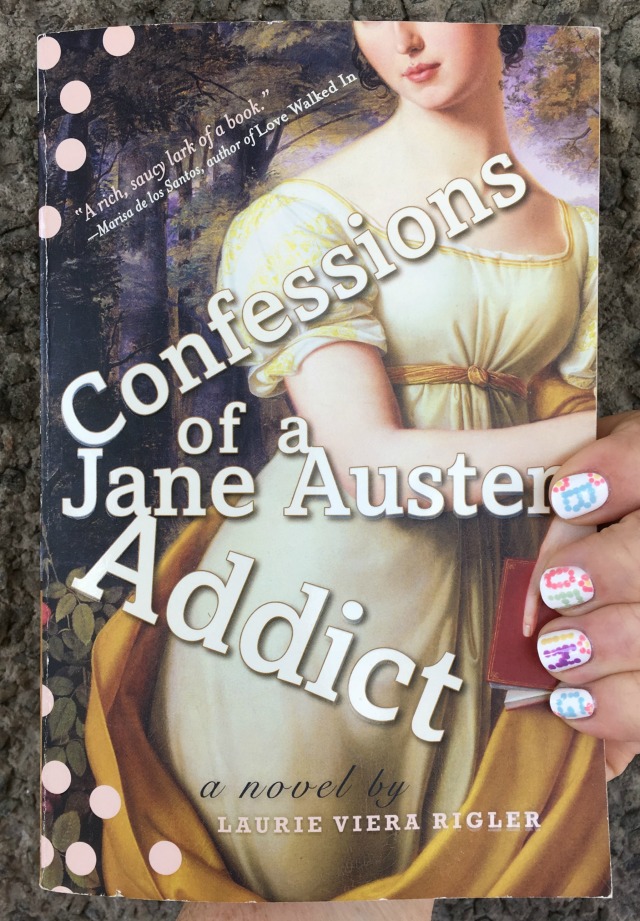 The only real emotion I was able to muster was when Courtney/Jane, worn down by her fruitless attempts to get back to her time, says to hell with it and nearly shags some random drunkard in a side parlour during a fancy party in London.  Times have indeed changed, and in Courtney’s world, having a one-night stand with some random is NBD.  But in Jane’s world, for a woman of her station – proper, wealthy, and with at least one suitor poised to propose marriage, to say nothing of the batshit mother – this indelicate act is tantamount to taping a grenade to her face.  It was a reckless move on the part of the character, and a careless move on the part of the author – Austen’s most beloved heroines are always fiercely protective of what little independence they’re able to carve out in such a regimented society, but they’re not careless with their safety or their reputations.  You’d never find Elizabeth Bennett contemplating how much fun it would be to drag some drunken lout into a coat closet for a snog while Mr. Darcy stands outside.  She’d just be looking for a way to get the hell out of the party so she could go home, sit in the parlour with her father and listen to his wistful stories about a time before Mrs. Bennett.

My own mother read this book twice, out of admitted boredom.  She was apartment-sitting while we were on holiday and our TV went on the fritz; with nothing else around she wanted to read (seriously, Mom, there is a SHELF full of Stephen King; read those, they’re great!) she willingly read this book, that she had previously loaned me, again.  I don’t even know how, and I really don’t know why.  Is Stephen King really that bad?

Anyway, the only thing more boring than Confessions of a Jane Austen Addict is needlepoint, an activity Courtney/Jane spends a lot of time attending to, so I did this folksy, stitched manicure articulating my feelings on the matter. 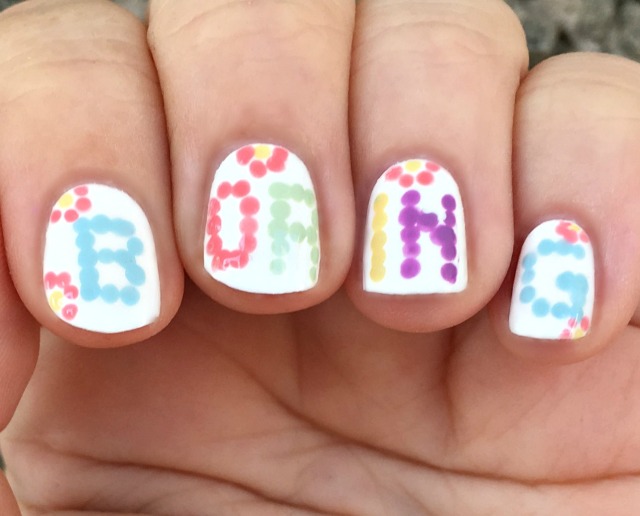 2 thoughts on “Literary Inspiration: Confessions of a Jane Austen Addict”