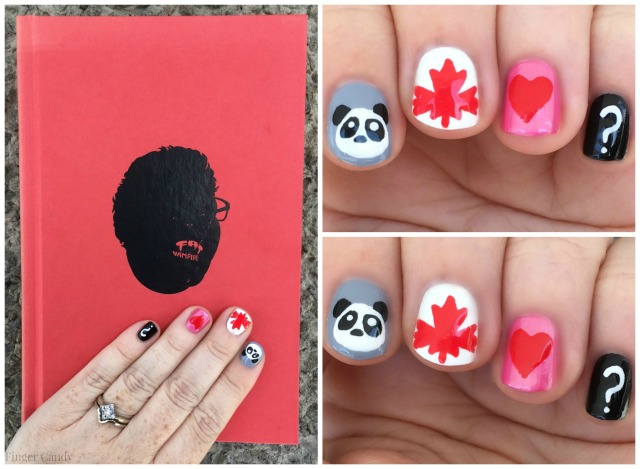 So read in service of my friends’ 2019 reading challenge for the theme of a coming-of-age tale – or in this case, the after-the-colon sub-title of “A Never Coming of Age Story.”

2010’s Fat Vampire, by Adam Rex, starts off strong and engagingly daffy.  When the book opens, 16-year-old Doug is really not living his very best life, beset on all sides by bad skin, weight gain, unpopularity and a new, deeply confusing state of vampirism – confusing because post-transformation, Doug is still just as overweight, unpopular and bedeviled by acne as he was before.  No “Sleep all day, party all night” for this vampire.  And the biggest bummer of all is that he’ll remain this way for eternity.

The first 50 or so pages of Fat Vampire had me guffawing out loud, shouting lines of dialogue out to Mr. Finger Candy with glee – “And then he gets punched by a panda!”  There was so much to giggle at in those opening pages, from Doug’s botched plan to feed off a celebrity panda at the San Diego Zoo (it really does result in him getting cold-cocked by Baby Shaun Shaun’s righteously pissed off mother) to his buddy Jay’s deer-in-the-headlights attempt at distraction at the blood bank he and Doug inelegantly attempt to rob (“WE DON’T HAVE ID,” said Jay, loudly.  “‘CAUSE WE’RE CANADIAN, WE DON’T USE ID.”  “What part of Canada you from, honey?”  “THE LEFT PART,” said Jay.”)

Doug and Jay’s clumsy adventures in San Diego quickly catch the attention of smarmy cable TV producer Alan Friendly, who’s looking for proof irrefutable that vampires exist.  The future of his low budget program, Vampire Hunters, hinges on finding and investigating real vampire activity, and his sponsors have run out of patience with his zero-sum results.  Soon, Doug has a bunch of ratings-obsessed reality TV types on his tail, with no clue how to shake them.

After moving the action back to the boys’ suburb outside of Philadelphia, the book veers off into about seven different directions, none of them particularly coherent or funny or informative of the story as a whole.  Doug links up with a group of elder vampires and discovers that he’s far from the only student at his high school to be recently transformed, though no one knows who the vampire or vampiress might be.  The jocks are werewolves.  Which is a metaphor.  Until it’s not.  An Indian exchange student by the name of Sejal shows up and catches Doug’s eye.  Sejal shows him absolutely zero interest, and when she turns down his invitation to go on a one-on-one date, he bitterly accuses her of leading him on.  Sejal doesn’t care; she’s got her own problems to deal with, including shaking her former identity as a sufferer of “The Google,” a too-twee way of saying that back in India, she was a dick to other people online.  Jay bears the brunt of Doug’s not-so-gentle good humour, and other people begin to notice the one-sided nature of their friendship.

Somewhere in here Doug feeds off a sexy deer and turns into a raging asshole.  I missed the bit about how deer blood apparently suffuses you with sexy dickhead superpowers, but next thing you know, Doug’s skin has cleared up, the weight has come off and hey, he even has a girlfriend to abuse and ignore.  Sure, she’s albino pale, rail thin and seems to be suffering from an epic case of unexplained lethargy, but here’s finally the girl the world has promised guys like Doug.  Ah, Doug – the vampire incel hero you never knew you needed.  And he’s still a dick, except now he’s a full fledged vampire dick.

The Vampire Hunters stuff gets dealt with, sort of.  Chasing after Doug, Alan Friendly is involved in a huge car crash and is critically injured.  At the end of Fat Vampire you don’t know if he’s going to live or die – his story simply ends.  Ditto another very important character, who deserved so much more.  The book ends with a definitive conclusion undone by about a dozen what-ifs, all of them so much better than the actual ending.  It was a frustrating read, particularly after all the charm and wacky delight of the opening chapters.

Fat Vampire feels like two separate books slapped together, one filled with all the wit and awkward whimsy you’d expect from a story about an unpopular, underage vampire, and then another nastier little book about a mean and bitter man raging at a world that hasn’t given him what he feels by rights is his.  No wonder I didn’t enjoy it – don’t we have enough of that in the universe already? 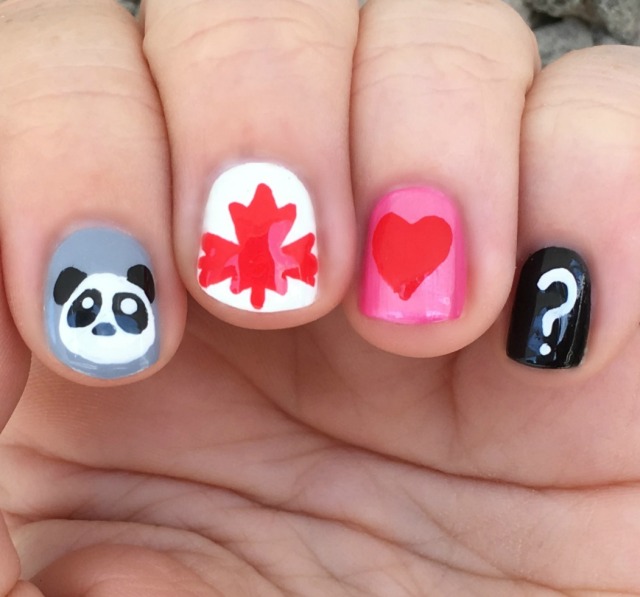 I do like these nails, though, which feature Baby Shaun Shaun, Jay’s Canadian maple leaf, Sejal’s ditched-at-the-airport pink suitcase with its heart-shaped luggage tag and my own befuddlement at the story.  Truth in nail art, yo.