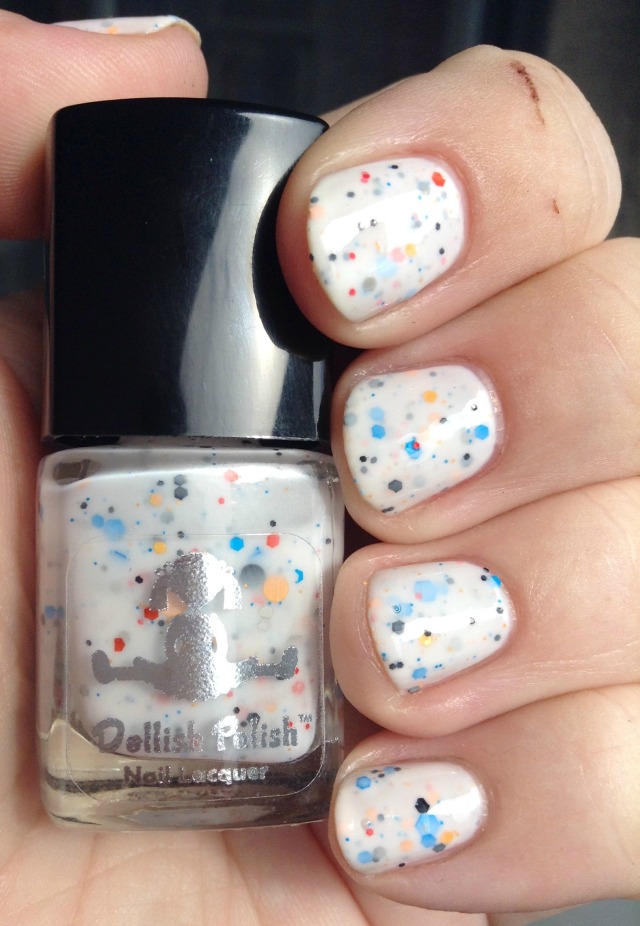 I bought this polish, Dollish Polish’s One Choice from their Ultimate Fandom Collection, because yes, it’s cute and its glitter mix of primary-coloured hexy bits is something a little bit different, but mostly because – sorry, sweetie, but I’m about to out you – Mr. Finger Candy is a giant nerd for dystopian teen romance action movies such as the inspiration for this polish, last year’s Divergent. I thought he’d enjoy the nod to his favourite movie of the summer of 2014.

And I love that I’m still sporting that badass-looking cut on my index finger for this mani. It really fits in with the whole “I sustained this whilst leaping from a moving train onto the roof of a building before rappelling into an impromptu rave/fight club in a leather jumpsuit” vibe of the movie (I wish I could say the same for the broken nail on my ring finger, but that just straight up broke on me this week – twice.) Actually, I think the five different colours of glitter – red, blue, gold, silver and black – represent the five factions of the Divergent world. I actually can’t remember, because, unlike my beloved, I thought it was just sort of okay; nothing I really ever need to see again. But I’ll definitely wear this polish again, because it’s super pretty – a unique choice for a time of year typically swamped with pinks and pastels, and just in time for the release of the second movie in the series, Detergent. Sorry, I mean Insurgent. 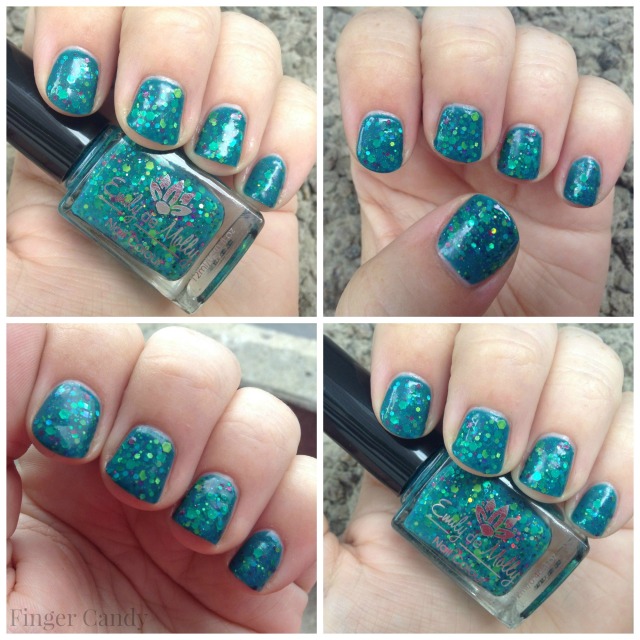 I broke a nail rather spectacularly this week, and so in lieu of soldiering on as I have in the past, my tinier-than-usual nubs an aggravating reminder not to vigorously shake water off my hands two inches away from a stone clad wall, I’ve decided to mine through some banked posts for a bit of content from The Way We Were files until I’m all healed up. As such, I’ve posted an absolute mess of swatch-type posts and very little nail art as of late, an absence I was sort of surprised to have felt. If you had told me a little over a year ago that I’d feel ever so slightly off after going three days in a row without intricately painting my nails, I’d have dubbed you Lord or Lady Crazy Pants, because nail polish and nail art were just not that important to me. Now I’m trying to find coping mechanisms to get through half a week of holo withdrawal. Strange world.

Having said all that, there’s infinitely worse ways to tide myself over and appease the nail blogging gods than with swatches of gorgeous polishes like this one, Emily de Molly’s Monet’s Garden. This is one of the first international polishes I ever bought, and it remains a favourite in major rotation owing to its lush turquoise jelly base and Impressionist-esque mix of holographic glitter. The great Cher Horowitz once commented that a classmate of hers was a “full-on Monet” – “It’s like a painting, see? From far away it’s okay, but up close it’s a big old mess” – but she’d be dead wrong about this nail polish, because it’s sublimely gorgeous just every which way. 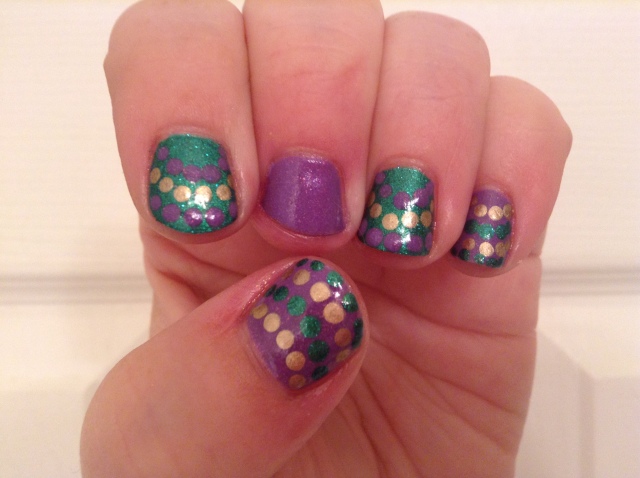 These festive nails were super easy to complete and I think they look pretty cute for a design that took next to no time, but the real takeaway here should be the grievous injury I sustained to the nail of my middle finger (my favourite finger!) Yes, after approximately seven months of daily nail art and nail art-related activities, I finally suffered my first irredeemably broken nail – it simply shattered and was not to be put back together again. Seriously, look at that thing – it just *looks* painful, and I can tell you with absolute certainty that it’s just as sore as it appears. Then, to make matters worse, I gouged myself in the finger with my ultra sharp manicure scissors, leading to more soreness and ugly. Truly, it’s a nail disaster on all possible fronts.

But you can’t keep a good manicure down for long, and I refuse to either hide my boo-boo OR resort to stand-in tips, and so the sad, stubby finger remains (as will my uncomfortably awkward new hand positions while taking photos, in an effort to hide the worst of the whole greasy horror show!)