Squeezing some of my sunniest polishes into the final few days of summer with this pretty swatch of Candy Lacquer’s Butterfly Candy, a favourite rainbow glitter bomb speckled with a kaleidoscope of butterflies (fun science-y tidbit: that is the actual technical term for a grouping of butterflies, a kaleidoscope.  So beautifully fitting!)

Shine on, you crazy disco butterflies!  And a pleasant end of the week to you all.  See you on the other side, kids. 🙂

Mr. Finger Candy likes to joke that my taste in video games is completely schitzoid – it’s either totally family-friendly, G-rated fare (currently working my way through the PS4 reissue of the Lego Harry Potter series) or it’s a blood-soaked, LSD-fueled descent into Victorian era madness (I’m awaiting 2017’s release of We Happy Few, a gorgeous, Bioshock-ish game about a filthy, dystopian version of 1960s London where everybody pops a super mood-enhancing drug called Joy to distract them from all the real activities going on in dirty, dystopian London, which would be mind control and slaughter.  Good times!)

2011’s Alice: Madness Returns, a favourite of mine – indeed, I launched this blog with nothing but those first rough Alice designs – falls squarely into the latter category.  It’s beyond messed up – rough subject matter, abject cruelty, nasty blood and gore.  Cripes, why would I play such a thing?  Well, I haven’t, not since I platinumed it back in 2011 (yes, I just used “platinum” as a verb.)  But Alice ranks as a favourite simply by virtue of its beauty; it’s the most gorgeous video game I’ve ever seen, filled to the brim with mesmerizing visuals.  Sometimes I’d just park Alice on a cliff and randomly swing the camera around, taking in every inch of the sick (in every sense of the word) artwork.

Getting down to these inspired-by nails, our girl Alice wears black and white striped tights.  And since American McGee’s version of Alice can’t seem to take two steps without running something through with her Vorpal Blade, I added a bit of blood spatter.  Finally, when Alice needs to take giant leaps across immense chasms, she busts out this nifty little double-hopping float that (usually) lands her gracefully on the other side. The best part of that move (aside from the physicslessness of it all) is that when she hops, she’s swept up in this pretty little tornado of blue, black and white butterflies that guide her safely to the other side.  So I added some of those boosting butterflies – can’t be too careful when you’re running (floating) through Wonderland hacking and slashing. 😉 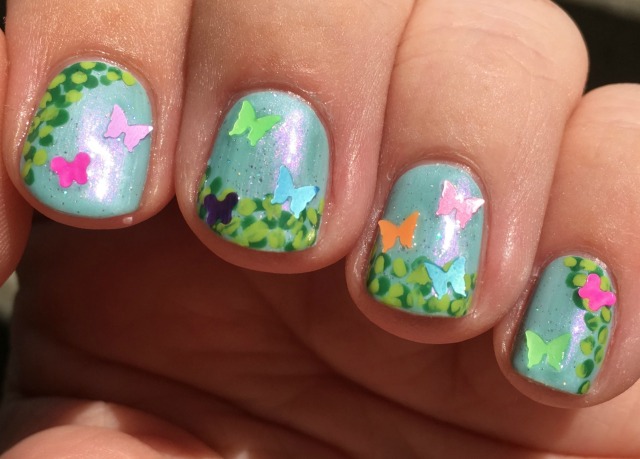 Oh, dainty little glitter butterflies, you are terrifically cute, but you vex me so.  That I could clip your tiny paper wings, I WOULD, clip ’em good, because they are sticking up everywhere, even after two thick coats of Seche Vite, and snagging on ALL THE THINGS. This is seriously the prettiest, most annoying manicure ever! 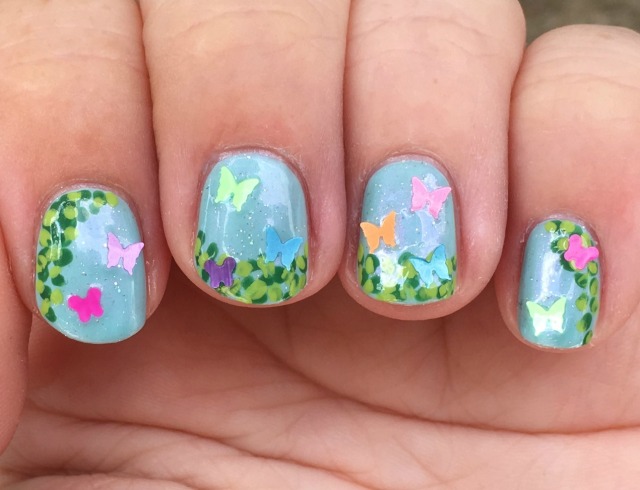 Holy cats, did these nails ever put the “challenge” in “nail art challenge.” I haven’t had to fight for (or against) a manicure this hard in forever! These simple white butterfly silhouettes on a beautiful background of Smitten Polish’s glittery Glacial Springs are actually my third run at week two’s theme of butterflies in the May N.A.I.L. Challenge. I initially started out with a much more complicated design before I realized I’m total crap at drawing butterflies, and wisely returned to the drawing board to hammer out a simpler, more streamlined design. This is so much better than my first two pitchy attempts, even if you wouldn’t be mistaken in confusing those dancing butterflies for floating leaves. 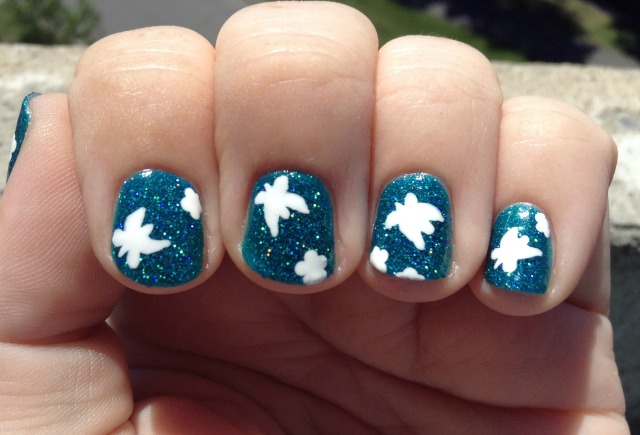