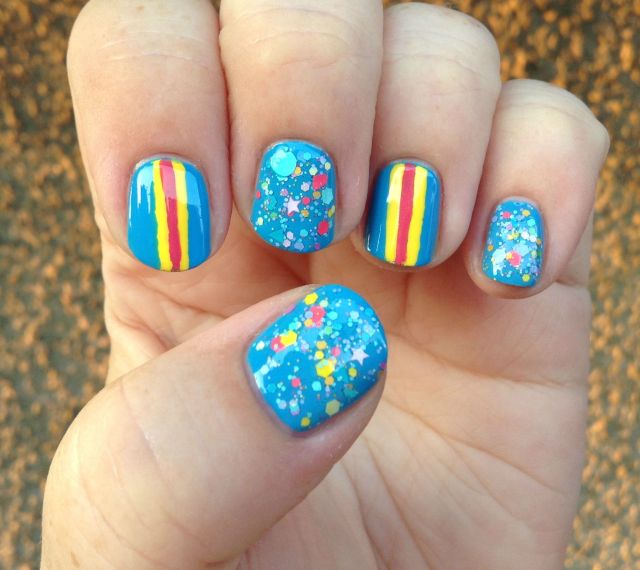 When I was a kid, there was no more bittersweet joy than welcoming the Exhibition to town, a Canada-wide touring carnival whose presence in my city for the final few weeks of August always signaled the end of summer and the start of another school year. The Exhibition was kind of a big deal for my friends and I – lots of attractions to ride, lots of mini donuts to consume, and then when we got a bit older, lots of concerts to attend, lots of boys to flirt with. I have so many great memories of mucking about the Ex with my parents, childhood friends, boyfriends, baby-sitting charges, besties and random strangers alike – it was all-inclusive fun, so long as your idea of fun is having your best friend yak her chocolate custard cone all over your knapsack two seconds after stepping off the Pirate Ship (true story!)

All this carnival talk springs from the polish I chose to accent these simple, summery racing stripe nails, Candy Lacquer’s pastel matte glitter topper, Carnival Games. Carnival Games is one of my favourite polishes, and despite looking like it’s just a bit too much of absolutely everything, it’s actually THE perfect mix of pastel and mid-toned matte glitter in triangles, circles, hexes, stars, rings and micro dots. Here I’ve paired it with another favourite, OPI’s No Room for the Blues, my go-to shade of cerulean and a fantastic polish in its own right – I use it as the background for so much of my nail art because it flows onto the nail beautifully and self-levels like a champ. No fuss, no muss, which is exactly the frame of mind you should be in come carnival time. 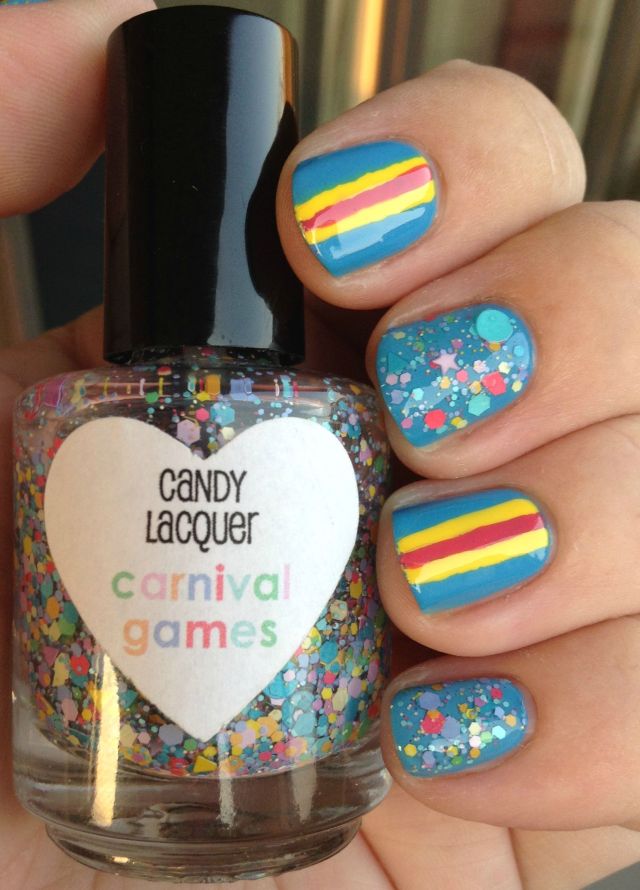 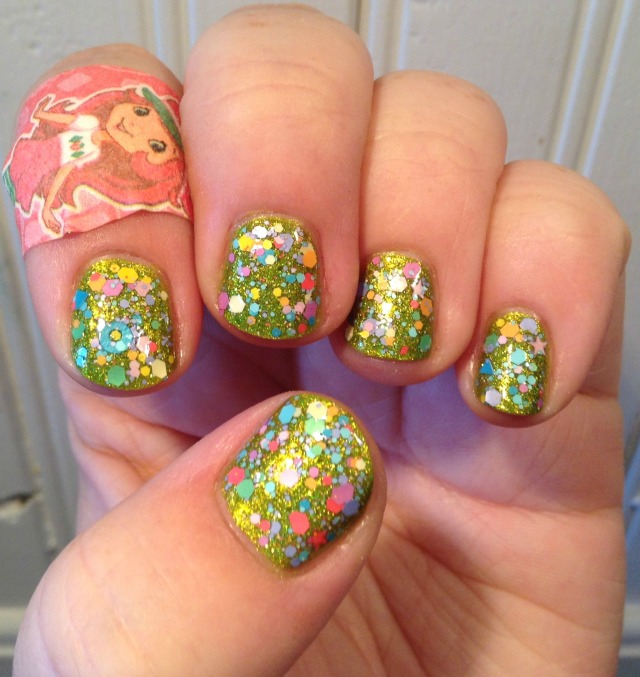 I’m coming at you with multiple posts today (bandaged such as they are) because as it turns out, while I may not be down for a big, rowdy evening of debautched Irishing, I *am* rather fond of St. Patrick’s Day-themed nail art. That combined with the fact that I own approximately 20 green polishes (a rather surprising discovery; I’d never call green my favourite anything) means I’m more than equipped to handle multiple manis in honour of, and inspired by, St. Paddy’s Day.

For this manicure, I went with a Lucky Charms-type look by pairing Cirque’s clover-hued holo, Panacea, with Candy Lacquer’s pastel matte glitter bomb, Carnival Games. I’ve often referred to one of Carnival Games’ sisters, Fairyland, as “Lucky Charms in a bottle,” but with its super summery mix of matte glitters in every shape, size and colour (no hearts and clovers, but there are stars and circles, donuts and triangles) Carnival Games is pure, crusty marshmallow goodness in a bottle. 🙂 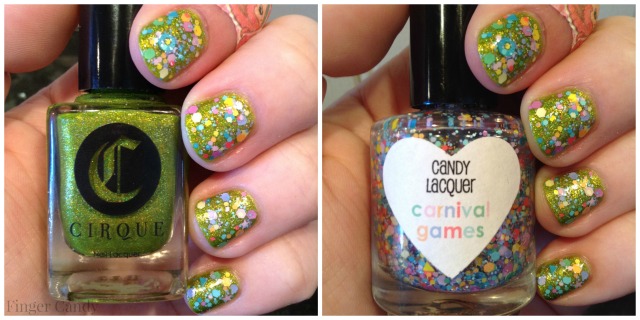 And just look at this combination in gigantic, macro-sized close-up! Beautiful (plus I’m finally getting the hang of the macro lenses my husband gave me for Christmas, huzzah!) 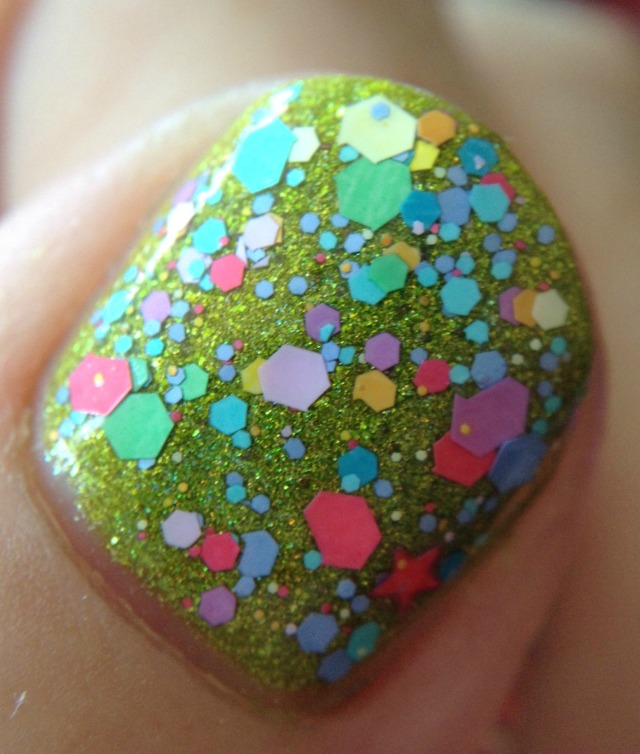 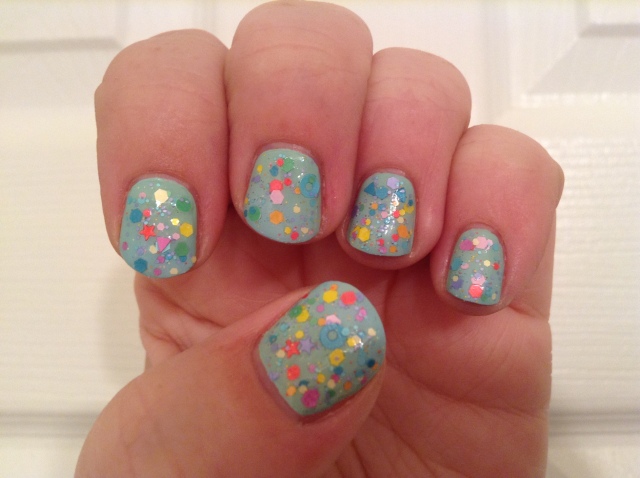 I woke up this morning and found myself in a mood. I slept poorly and was woken by the not-so-dulcet tones of my grumpy, bellowing cat. My arm quite mysteriously ached and the driving conditions were terrible. I walked out of the drugstore empty-handed after waiting in line for five minutes while the one cashier on duty did…other stuff. Back at home I rode the elevator with one of my elderly neighbours, who was returning from his morning swim and wearing naught but an insufficiently small towel to cover his girth, which based on my close proximity to his naked gut, I could clearly make out was covered in a fine pelt of snow white hair. And I’ve just been listening to far too many moody, melancholy songs given the already bleak time of year (Joy Division? Massive Attack? Instrumental scores from favourite television shows where everyone eventually dies?) TL;DR? It hasn’t been the best start to the week.

But things are looking up (I think there’s nail mail waiting for me in the mail room! So what the heck am I still doing here, right?), and not just because these nails, a pastel-on-pastel gradient topped with a bright, multi-coloured glitter, are super cheerful and just looking at them makes me a little happier (although it certainly helps!) 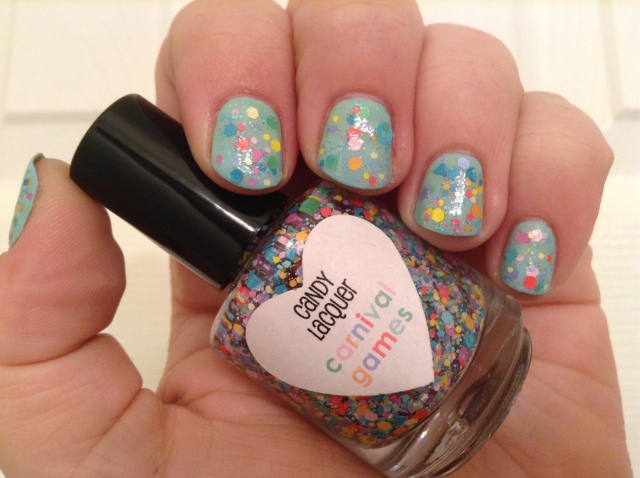 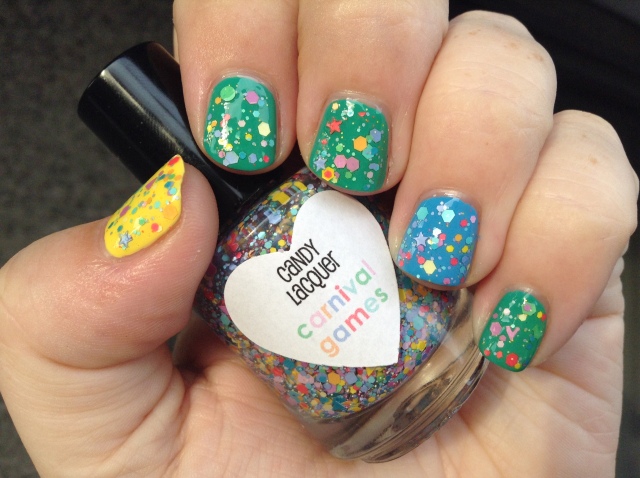 …until somebody goes broke from buying too much nail polish. I think that’s how that saying goes. Or at least that’s how it goes in my life!

Actually, all things considered and all joking aside, I really don’t own that much nail polish. True, I probably have more glitter polishes than the average lacquerista, and I know I’m in possession of more nail polish than all of my friends combined, but my stash is not ridiculously large, nor will I ever have to regard it as a not-so-well-thought-out retirement plan. I’m quite responsible when it comes to my polish purchases, even when I can’t manage the same for the rest of my life!

But there is the small issue of my devotion, shall we say, to big, chunky, looks-like-candy indie glitters (not to say that the commercial brands haven’t dipped their toes in the glittery water; it’s just taking a while for them to play catch-up.) My first (so hesitant!) online polish purchase was from Candy Lacquer, an indie polish maker who seems to specialize in exactly the kind of “Is this food?” glitters I like best. And like them best I do, because I’ve used the two polishes I bought, Licorice Allsorts and Fairyland, in about six million manis (okay, so that’s a bit of an exaggeration. It’s really more like 10 or 12. I was only off by 5,900,000 or so.)

And so when I was recently looking to gift myself with a little something special and sparkly, I went back to the Candy Lacquer well and bought *mumbles under breath* four new polishes, including this little gem I’ve taken to calling “theme park in a bottle,” Carnival Games. Here I’ve shown Carnival Games over – so weird – my three most stainiest polishes, although its delightful mix of rainbow-hued hexes, squares, stars, circles, triangles and donut glitter (that’s a new one) looks amazing over any vibrant hue, as well as old glitter base standards like black and white. Bonus: Although it’s positively packed with all of the aforementioned glitter, the formula is not dry and application (one brushed-on coat with a smidge of dabbing here and there) was a breeze. So let the (carnival) games commence! 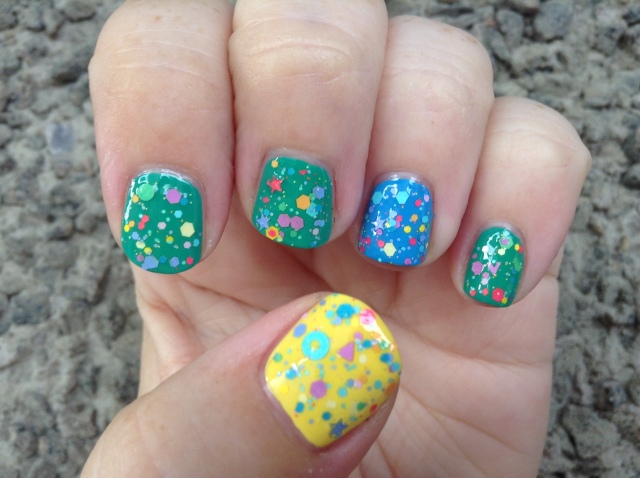 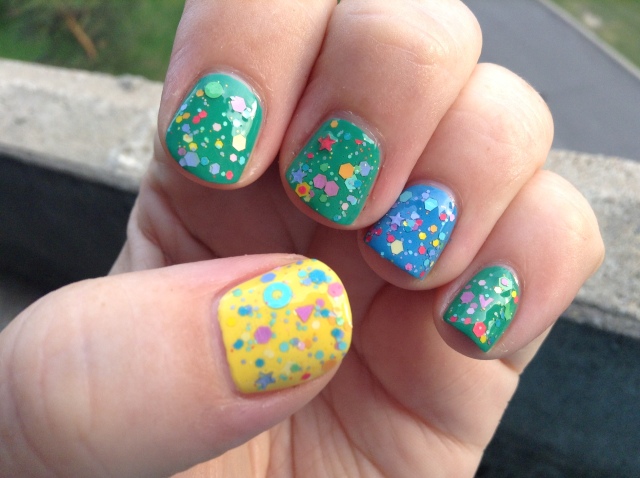