Yes, I am completely one of those (getting-to-be-annoying?) people who has drank the Stranger Things Koolaid.  In my case, though, it’s less like Koolaid and more like the very blood that runs through my ever-nostalgic veins – this show could not possibly be more up my alley than if it were called The Sandra Lewrey Show for Sandra Lewreys.  I grew up on a steady diet of the ’80s movies, TV shows, novels and music Stranger Things so lovingly recreates (Steven Spielberg, Stephen King and John Carpenter being the primary influences) and its arrival on Netflix not even two weeks ago now – right in the midst of a languid summer heatwave, exactly the kind of conditions under which I used to sprawl out in a friend’s cool basement and wile away the humid daylight hours with some combination of The Goonies, Stand By Me and either Poltergeist or Jaws playing on an endless loop on the TV – signaled the end of all other productive activity.  I’ve regressed, and it feels fabulous.

Everything that just about everyone has said about Stranger Things I second, third and fourth, which is also the approximate number of times I’ve watched the eight episodes back-to-back.  I even found myself engaging in a round of Shag/Marry/Kill today with Mr. Clarke, Hopper and Mike and Nancy’s dad, Ted (for the record, Ted gets the axe, Mr. Clarke is the one I’d marry and Hopper…it’d be hot for about two seconds.  Then he’d start crying and pass out on top of you in a drunken stupor until you’re either crushed to death by his massiveness or drown in his cold flop sweat.)

On a more serious note, Stranger Things is a show to be savoured, a show to be studied. Note all of the grid imagery that makes up the bulk of the show’s aesthetics.  Start looking and you’ll find those horizontal and vertical lines – like the bars of a cell – and grids – like the graph paper the boys use to plot out their D&D adventures – EVERYWHERE.  Then there’s the use of water and keys and music, and the fact that I am super invested in a fictional relationship between two 11-year-olds.  Stranger Things have happened.

I could talk about this show all day long (pretty much do) and I adore it more than anything I’ve seen in forever, but I’ll leave off for now with these nails, a nod to Joyce Byers’ homemade wall ouija and the show’s overarching message that we’re all RIGHT HERE.  Nothing strange about that.

I think these nails look like multi-coloured twinkle lights as seen through squinted eyes. Or possibly the pattern on a tweed jacket from the 1980s. Actually, didn’t James Spader’s Stef wear a black linen suit in Pretty in Pink in this exact pattern? He had such a special wardrobe in that movie.

Anyhow! No matter the inspiration (although I guarantee you it wasn’t Pretty in Pink; I friggin’ hate that movie – too mean) I think these nails are super cute, and actually, in hindsight, a rip-off of a portion of my own design of last Christmas, which you can see here. Oops?

And because it will most likely get asked, the base polish I used here (from which I drew inspiration for the colour of the “lights”) was Pure Ice’s RespecK, a gorgeous polish with a stupid name that I will begrudgingly forgive it for on account of its $1.97 price tag at my local Walmart. 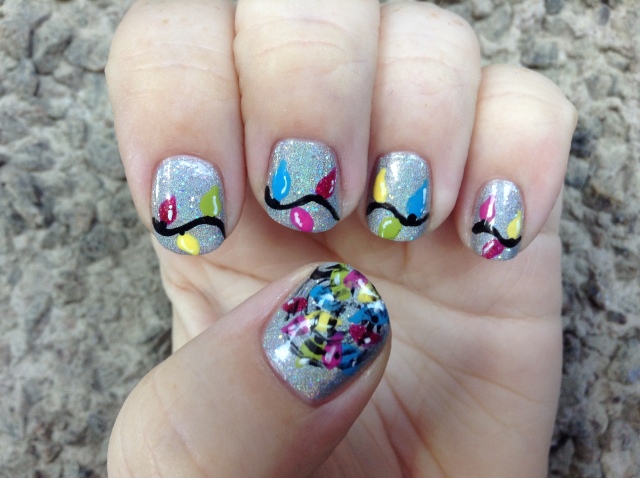 I did an identical design to this lit-up and tangled-up manicure last year and liked it so much, I thought I’d try it again this year now that I’m older (absolutely) and wiser (debatable.) I prefer the base polish I used this year, Orly’s Mirrorball, although I think the hopelessly knotted tangle of lights is pretty great in both. You can see last year’s effort down below after the story of The Year Sandra Lost Her Mind Over the Tree.

The first Christmas after my husband and I bought our condo, I went all out on the decorating – lights in every window, running along both of our balconies and woven throughout the headboard of the second bedroom daybed. There were stockings dangling from every handle, wreaths hung on nearly every window and, as the centerpiece to it all, our glorious Christmas tree, a perfectly proportioned artificial work of art that has graced our livingroom for the past 11 years.

That particular year I had clearly gotten it into my head that when it came to the Christmas decorating, MORE WAS MORE, and that definitely applied to the tree. And so when I found myself some 16 hours later, mired in a tangle of tiny twinkling Christmas lights, sobbing because I had decided that I’d weave the strands around every single point of every single branch, which led to me running out of lights nearly immediately, which in itself necessitated an additional FOUR trips to the store to get more lights, I had no one to blame but myself. The whole thing topped out at 2,100 individual twinkle lights, about 10 hours of actual “installation” and who knows what portion of my sanity, and I kept the tree up until March because I couldn’t bear the thought of untangling 21 strands of lights, but it really did look so beautiful. I, of course, have since learned that 700 lights plus one two-hour viewing of background Elf equals pretty much the same effect, which is equal parts infuriating and a massive relief. I call it my Clark Griswold moment, and it’s pretty legendary around these parts: The Year Sandra Lost Her Mind Over the Tree. 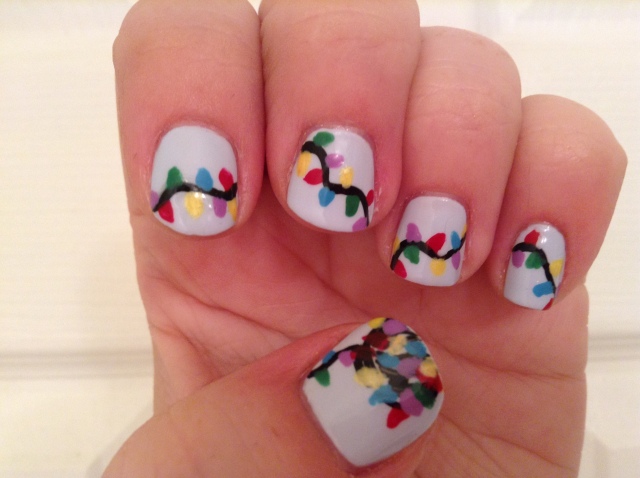 Except in my house, where the lights are oddly organized. I store them in plastic bags, one strand per bag. Then I toss the individual bags into one giant garbage bag and pack it away for the year. There, a handy little housekeeping tip for you along with a manicure. But don’t get too used to it, because that’s about the only one I’ve got!