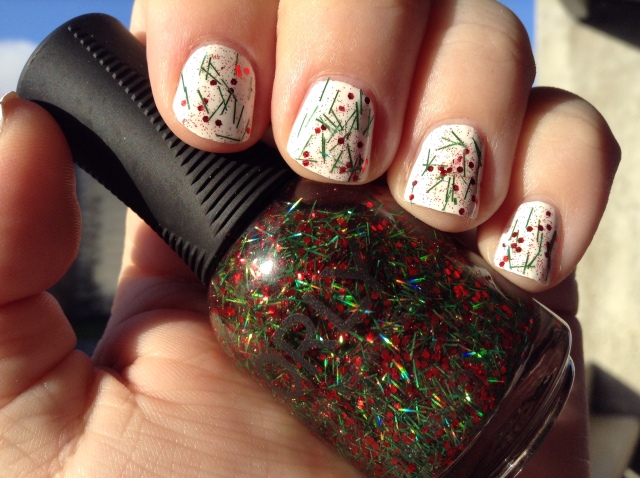 He’ll be learning of this for the first time upon reading this post, but I bought this polish, Orly’s aptly named Tinsel, mostly to placate my husband, who declared it awesome and worthy of joining the Finger Candy nail polish stash. I wasn’t totally convinced, though. I like polishes with an overabundance of visual interest, and Tinsel seemed a bit…plain. But on a recent trip to Sally Beauty Supply, the equation worked out something like this: Desire + availability – willpower = bought and sold and coming home with me! My husband would be so pleased at how very little resistance I put up to this one (because, come on, at the end of the day it’s still new nail polish, and that’s rarely, if ever, a bad thing.)

But as it turns out, my reticence was for naught, because Tinsel is actually pretty great (don’t tell Mr. Finger Candy; it’ll just go to his head.) A simple mix of green bar and red hex glitters in a clear base, Tinsel is deceptively pretty and looks exactly like the festive mess of tree needles and Christmas ornament glitter that winds up spread across your home from pillar to post every December. I think I’ll find quite a few uses for it over the holiday mani season (because let’s not fool ourselves too much here – Tinsel is beautiful, but it is a holiday polish through and through.)

“Post-modern trees?” my husband asked. “Nope, just the regular modern variety,” I responded. Or more accurately, these are the done-in-under-half-an-hour nails of a person who is aggravatingly succumbing to a tremendously ill-timed bout of pre-Christmas flu and can’t be bothered to hunch over her nails for an hour painting holiday-themed details in tiny, painstaking detail. In short, being sick is not particularly conducive to the practice of nail art.

Still, there’s something quite festive and a tad more “adult” about these nails than your – and particularly my – Christmas designs. That they were dead simple – grab a dotting tool and dot on your trees, then sit back to cough and sneeze a bit – is a nice little added bonus.