Or maybe just my nails, although who am I kidding, nail polish with colour co-ordinated LEDs in the caps is pretty awesome.

Also awesome?  The ultra bracing, highly noxious scent of this polish, Cinapro’s Nail Sugar in Sweet Tooth, has dissipated significantly since the last – and first – time I used it.  Truly, it was just this side of unusable, and overwhelmingly powerful.  Glad to see it has straightened itself up a lot.

Here I’ve shown three and a bit coats of Sweet Tooth straight up.  I’ve seen other bloggers layer it over dark creme polishes, complaining of visible nail lines if used au naturel, but I’ve never had that problem – Sweet Tooth is opaque in three hardly-lumpy coats, plus just a bit of touch-up to fill in any un-glittered bits. 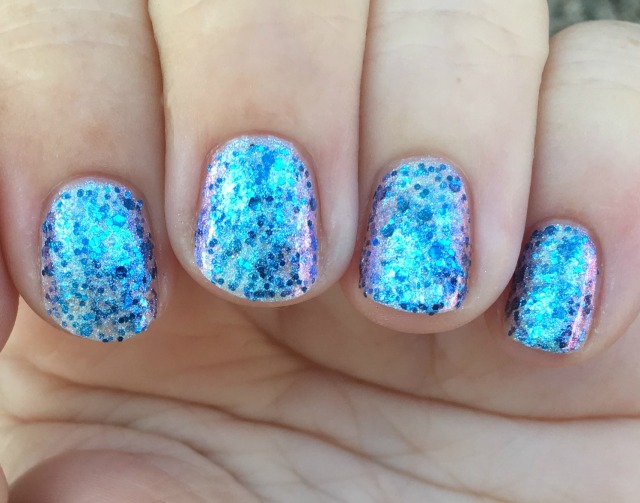 Cinapro has a number of different light-up polishes in their Nail Sugar line, although I think Sweet Tooth is the best of the lot, with its mix of blue hex glitter and iridescent, purple-tinged base.  Very pretty, and two years on from its purchase, still lighting up my life. 🙂

I’ll note for the squeamish and/or gore-curious that at the end of this post – spoiler! – there will be blood. Because it is simply one of those truisms of the nail art world that the second you get cocky about something – your abilities with a detail brush, the health of your nails, the unblemished skin of your hands – is the precise moment everything will fall spectacularly to pieces. This actually holds true for most things in life, but especially the world of nail art, where one day you think to yourself, “Wow, it has been a REALLY long time since I broke a nail” and the next you’re contending with two broken nails, a clipper-inflicted nick and an inch-long gouge on the index finger of your swatching hand where you scraped it across a deeply embedded, tetanus-producing carpet staple you were attempting to yank out of the underside of your stairs. True story (see below)! 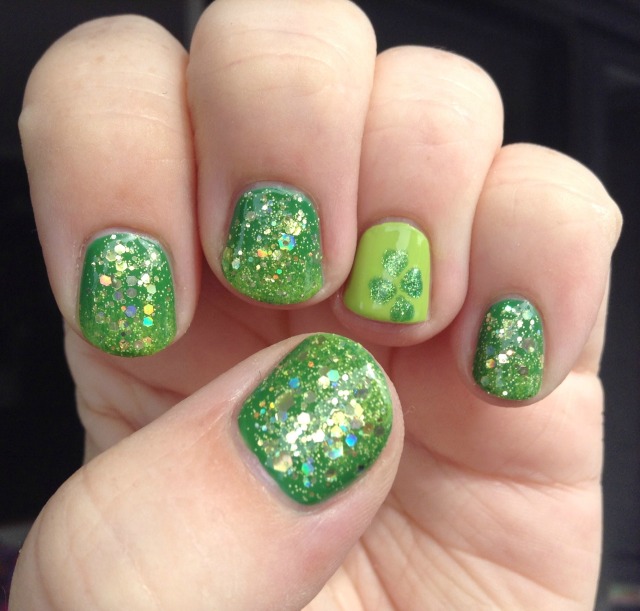 But until everything went pie shaped, things were going pretty well with these festive, glittery gradient nails I cobbled together for St. Patrick’s Day tomorrow. Here I used two of my stainiest polishes, Essie’s dark green Pretty Edgy and Pure Ice’s grass green Wild Thing, in a simple gradient, topping the whole thing off with one coat of Cinapro’s Nail Sugar in Hyperactive, a goldy-green holographic glitter in a sheer lime base. Then I added a tiny clover accent nail, but who’s going to notice that when there’s all this yeeeeeeeeee-OUCH going on?

Polished hands down, my favourite go-to mani is a simple gradient topped with a fun, blinged-out glitter topper. Assuming you’ve got a handle on the gradient technique, it’s quick and easy work for maximum results (and if you don’t have a handle on your gradients, that’s when you lean on your glitter topper – nearly all nail sins can be eradicated by the judicious application of MOAR GLITTAH.)

For these nails that remind me of the pelt of the mythical and fictional (let’s hope) Purple People Eater, I topped an orchid-on-charcoal gradient with one coat of Cinapro’s Nail Sugar in Rock Candy, a purpley-pink and silver glitter polish studded with black hex glitter. I love that despite being quite eye-catching and spackled in a coat and a half of shiny stuff, these nails are actually quite posh. I occasionally paint my nails in ways I wouldn’t care to bring out into the “real world” (hi there, fimo cane decals), but this manicure is a touch more subdued, dare I even say adult? Or as adult as you can get when your nails remind you of a fictitious, human-snacking oogie boogie!

By the by, speaking of serious, adult things, I should note that all of Cinapro’s polishes in the Sugar Rush line house a cool, colour co-ordinated LED light in the cap for the glitterista on the go, although I’ve never used them in any way other than lining them all up on my diningroom table with their lights on and going “Ooooh!” and then “Ahhhhh!” But to each their own!

Okay, who remembers Cinnaburst gum? Wait, is Cinnaburst even something we should be talking about in the past tense, or is it still in production today? I can’t remember having seen it at a store in ages. Right, you wait here and I’ll be back in a jiff. *scampers off to consult Google*

All right, here’s what I’ve gleaned about Cinnaburst chewing gum via the almighty interwebs. Firstly, I’m spelling it wrong. Its official spelling is Cinn*A*Burst, which puts it in contention for the award for dumbest use of a symbol within a proper noun (see also Ke$ha and, of course, Prince, whose name for a while there was nothing but a symbol.) Secondly, it seems as though it *might* still be in production and *may* still be available at certain specialty and/or out-of-the-way shops, although there’s precious little information about it online (the most common Google search amongst only 11,000 entries was asking where on earth one might procure a pack of the stuff.) Thirdly, and finally, the last nail in the Cinna-coffin seems to be an overwhelmingly large number of “Does anyone remember Cinnaburst gum?” posts with links to tragic fads and fashions of the ’90s. To answer the question, no, it appears as though no one does remember Cinnaburst gum.

Except me! Because I loved the CRAP out of that stuff. It was a stick gum that was studded with these weirdly delicious and gritty little flavour crystals that would snap when you chewed, sending little bursts of cinnamon-flavoured food additives shooting into the back of your throat like super low grade Pop Rocks. It ran out of flavour in about five minutes flat (but really, what gum doesn’t?) and only came in packs of five or six sticks, so you were forever running out, but damn, that gum was great.

And so like I always do when I determine that something is great, I paint it on my nails! Here I tried a smoothed-out textured jelly sandwich (if that’s not a new nail art animal, I don’t know what is) to get that vaguely sparkly, red-speckled look of a stick of Cinnaburst. I went by the usual jelly sandwich method, using a light, sponged-on coat of Cinapro’s Nail Sugar in Cherry Cola in between two coats of a sheer, glitter-infused textured polish, Essence’s Hey, Nude! The texture on Hey, Nude! is quite fine, so it wasn’t necessary to add a topcoat, although I like the way a coat of Seche Vite adds depth and brings out the lovely silver and red sparkles in the mani (sorry, flavour crystals! I mean flavour crystals.)

Because sometimes you just want ultra sparkly princess unicorn nails, and who’s going to say no to the woman carrying a loaded lacquer bottle? Enter Cinapro’s Nail Sugar in Cotton Candy, a sheer pink jelly polish loaded with iridescent rainbow glitter. Like its sister polish from the same Sugar Rush line, Sweet Tooth, it has a cool co-ordinating LED light in the cap, perfect for lighting your way to pinked-out polish paradise. This polish doesn’t look particularly opaque, and so I layered two coats of Cotton Candy over one thin coat of a sheer pink creme, but you could easily get it to full opacity in three coats, ensuring that each coat dries completely before adding another layer, lest you suffer the horror of nail polish drag. Cinapro is a new-to-me brand, and if you like their polishes as much as I do, you can find their light-up goodies at Sally Beauty Supply. 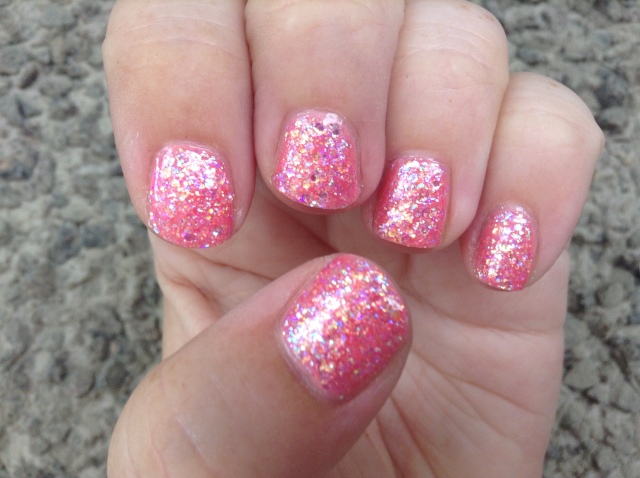 This polish, Cinapro’s Nail Sugar in Sweet Tooth, is 80 kinds of shimmery, glittery holo goodness (it reminds me of Fraggle felt, which makes no sense, as I don’t believe there was a blue spotted Fraggle) but holy cats, does it stink. Nail polish is nose hair-singeingly smelly under the best of circumstances, but this one is in a class all its own (so much so, if naming it were up to me, I’d call it Toxic Tanzanite.) So while it may make a beautiful, unique addition to your stash (there’s an LED light in the cap!) you may wish to exercise a bit of caution if you’re particularly scent sensitive. There’s a wealth of fun colours, glitters and textures in the Nail Sugar line, and I snagged my light-em-up bottle at Sally Beauty Supply.