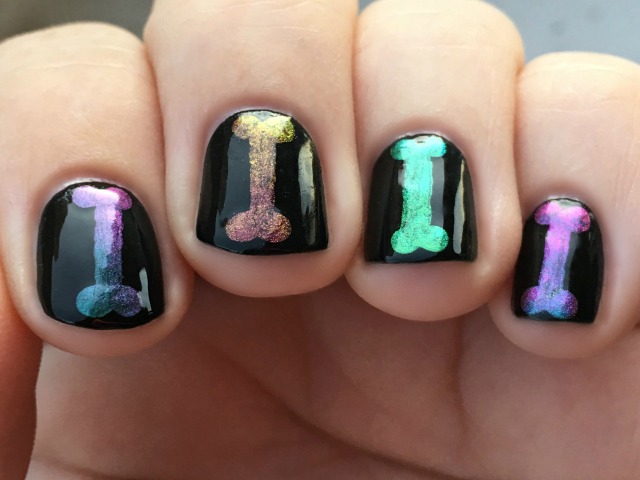 I’m participating in another nail art challenge over on Instagram, this time themed to seemingly everyone’s favourite holiday, Halloween.  This bonerrific manicure (c’mon, did you think I was going to leave a potential boner joke on the table, metaphorically speaking?) is in service of the first challenge prompt of “Spooky Skeleton.”

Speaking from a design perspective, skeletons are my least favourite Halloween decorating trope, and I’ve never really cared to paint them on my nails either (though this early design is way dope; I’d try anything in those super early days, and sometimes it didn’t even turn out that badly!)  But I do like bones (and boner jokes) and so I decided to do this simple, but rather striking, bone design, enhanced with four nifty, colour-shifting multi-chromes from Polish Me Silly (from index to pinkie, Obsession, Mystery, Dreamer and Paradise.) 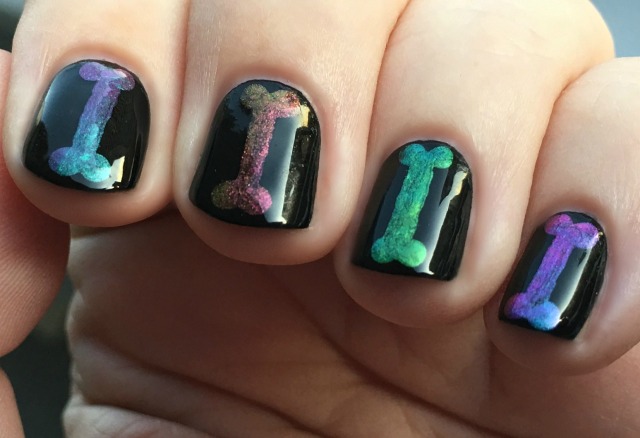 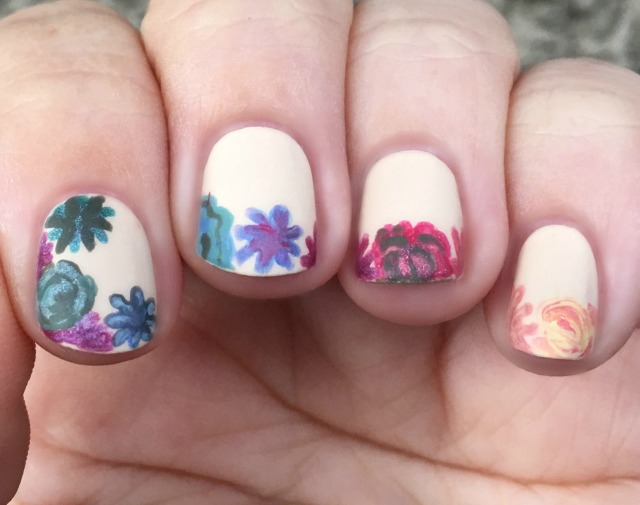 Well, trust me to take this floral manicure, which I did in service of the theme of succulents for a nail art challenge I’m doing on Instagram, and turn it into a discussion on Brooklyn 9-9.  Actually, I suspect I could turn just about any subject into a commentary on one of my favourite TV shows, I think about it just that often!

Anyhow, there’s this character named Charles Boyle, who’s played by Joe Lo Truglio, who you may remember as the creepy/skeezy/gross guy from any number of Judd Apatow movies (thinking of his character in Superbad here.)  I was definitely not a fan before seeing his work in Brooklyn 9-9, but as beige pants-loving, foodie cop Charles Boyle, he’s an utter delight.  No one loves fermenting mason jars of unidentifiable foodstuffs in their desk drawers more than Charles. 🙂

But Charles’s taste in food runs quite contrary to his ultra beige, Mervins-clad demeanor – Charles likes it weird, Charles likes it gross, and Charles probably likes it best if he kills it himself (he once fought off a rampaging turkey that had penned the squad into a bathroom with naught but a handily repurposed straightening iron.)  He also likes to discuss his foodie pursuits in THE most repulsive manner possible, always using the most descriptively disgusting language he can find – words like “moist” and “mouthfeel” and in one particularly nasty bit, the phrase “Oh, lucky you, you got the toenail!”  Long story short, don’t ask Charles Boyle to bring anything to the potluck, because it’ll definitely be offal.  Or worse.  And with its toenails still on!

At one point, another character submitted a list of words Charles was forbidden from uttering, and “succulent” was right at the top.  I get it, it conjures up the same sort of images in my mind as when I hear the word “moist” (which is apparently one of the most reviled words in the English language, didya know?)  To my mind, it suggests lush, almost juicy dampness.  Which, when I see it all written out like that, IS rather disgusting!

So it’s a real shame that succulents, the plant, have gotten swept up in the wellspring of negativity towards their name, because they’re so, so beautiful – such charming little plants with their heathered rainbow hues.  So I put them on my nails.  Hey, beats the heck out of trying to recreate one of Charles’s culinary nightmares!  You’re welcome. 😉 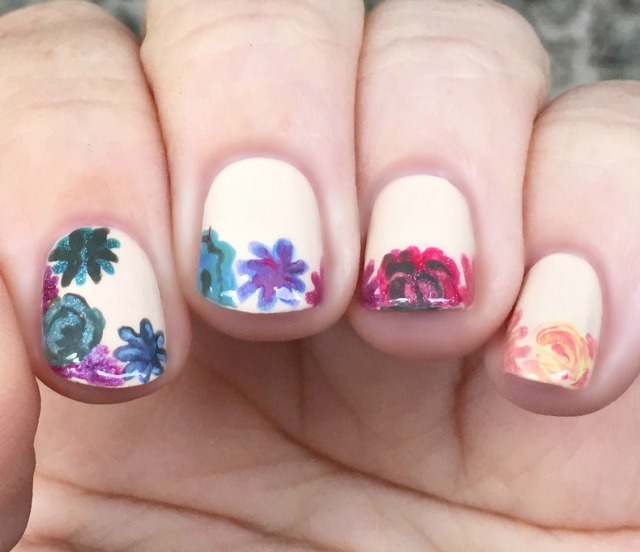