Today’s little wax haul comes to you courtesy of The Melting Duck, fine indie purveyors of rainbow-splashed, mica-dusted mini shapes and gigantic wax duckies.  I’ve been smitten with their huge assortment of adorable shapes, unusual colour combinations and pop culture-influenced scent blends for some time now; Halloween seemed the perfect time to test these duck-filled waters (shame my order didn’t actually arrive until the week after Halloween.  Shamer still that at least part of my order was to be a Halloween gift for friends.  Still, knowing my pals, I think they’ll have no problem tucking these guys away until next Fall should they feel that strongly about the very serious issue of seasonal melting. 😉  Me?  I’m jumping in straight away!)

This was such a fun package to open; this was my first order with The Melting Duck, and everything I pulled out of the box (“Whhhaaaattt’s in the booooooooxxxxxx?”) made me grin with delight.  Such detail, such whimsy!  First, let’s examine those plucky little duckies a little further. 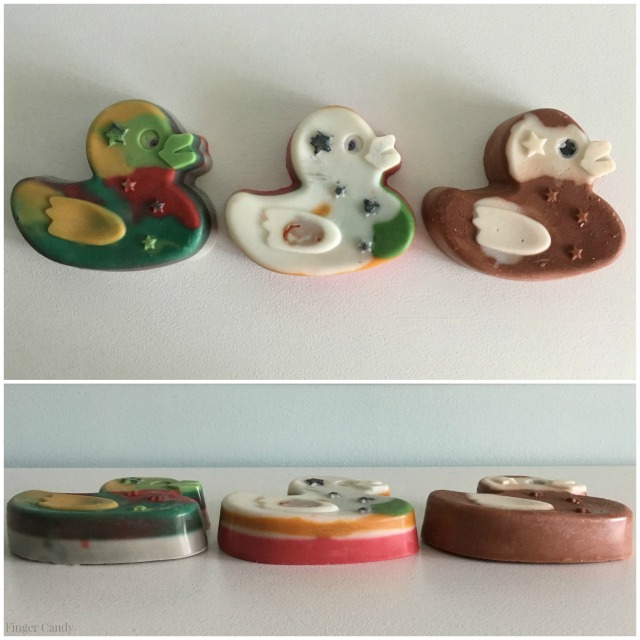 Except these duckies – The Melting Duck calls them Demented Ducks – are really not so little.  Weighing in at just a little under eight ounces per duck, there’s quite a bit of waxy goodness here.  And look at the mindful little details – the swirls and layers of colour, the very demented-looking googly eyes, the tiny Jack-o-Lantern glitter embedded in the middle duck’s wing.  Adorable!  Because you can’t get a good sense of the scale of these massive shapes as measured against each other, here I’ve set a Demented Duck in Heads Will Roll, a pumpkin cupcakes and candy corn blend, beside a favourite 60 ml bottle of perfume from Solstice Scents.  They’re so big, it’s totally quackers (wah-waaaahhhhhh.)

I actually chose just two scents in ducky format, Heads Will Roll and Briarcliff, a pumpkin, vanilla and marshmallow blend.  But a few days before my order went out, The Melting Duck said that owing to a bit of a pouring snafu, a scent I had chosen in the mini shapes – Duckin Donuts, a coffee-and-pastries blend – would no longer be offered in those shapes; would I be at all interested in some Demented Duckin Donuts?  I was, and so that’s how this charming little coffee brown duck (and a couple of his melt-mates) wound up rounding out my trio of fabulously fragranced foul.  I’m so glad I nabbed this one, too – had contemplated the refund The Melting Duck nicely offered, but chose to move ahead for my husband, who would mainline coffee in all its various forms if only he could.  He loves his mocha scents, and he’s going to love this one, too, because it’s a goody – smells JUST like the inside of a chain coffee shop, right down to the pleasant, comforting fragrance of fresh brewed coffee and glazed, yeasty pastries.  On an ounce per ounce basis, this very plump duck and the three cups (already melted one) worked out to more wax than I would have received in the bakery bags of mini shapes; an appreciated little bit of overage for the manufacturing goof.  Twas a nice touch.

I also picked up two bakery bags of mini shapes (plus a couple for friends, which I had to hold myself back from photographing, because they’re not mine!)  I chose a couple of very unlike me scents, All Hallow’s Eve (the purple, black and orange shapes, a sweet and creamy blend of candy corn, pumpkin cupcakes, buttercream crunch cake and caramel corn) and Ghost Stories By the Fire (the orange and grey shapes, a candy-sweet, almost floral blend of Marshmallow Fireside, Earl Grey tea and vanilla ice cream) – unlike me in that I’ve had quite a bit of trouble with pumpkin scents this season (headaches) and also because both fragrances contain scent notes that typically send me fleeing (candy corn, Earl Grey tea, Marshmallow Fireside in anything aside from all by its lonesome.)  But I really like both of these blends – actually, I like all the scents I chose, even the ones I gave away – probably precisely because they’re not my usual.  It’s good to change things up every now and then. 🙂

Ugh, and how stinkin’ cute are these little shapes?  I die for the wee little duckies in both blends, but the Dia de los Muertos skulls, baby broom and grinning Jack-o-Lanterns of All Hallow’s Eve are outstanding.  Such lovely design work, it almost seems a shame to melt them.  But melt them I will – I’ll just try not to stare directly at the duckies while it’s happening.

If you’re interested in getting in on all this sweetly scented ducky action, you can join The Melting Duck’s Facebook group to stay up-to-date on future pre-orders and new releases.  They actually just held the final pre-order of the year for a number of holiday-themed blends, although I managed to abstain; I’m pretty flush with wax at the moment.  But no doubt they’ll be back and raring to go in the new year with all sorts of adorably fun shapes and colours and scents, and we’ll be there then!