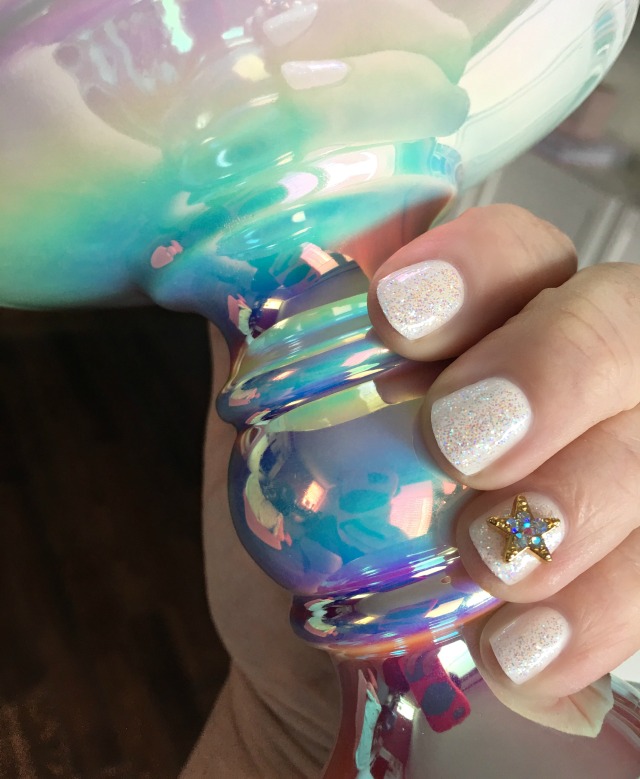 Kicking off another week of winter with an easy peasy manicure positively spackled with iridescent glitter.  This is four coats of Essence Polish’s Space Queen over a simple white creme.  I always think these kinds of not-too-flashy clear glitter polishes look like they belong in a little girl’s Tinkerbell makeup kit (Tinkerbell Cosmetics, for my younger readers, was the ’80s girl’s answer to the kind of makeup they sell today in inexpensive jewelry and accessory shops like Claire’s – it was *maybe* not of the greatest quality, and everything smelled like plastic strawberries.)

But the Space Queens of the world endure because these polishes are fun, for little kids and big kids alike.  It’s also the only iridescent glitter polish I own, because iridescent glitter sticks to your nails like it’s been Crazy Glue’d onto your person for LIFE.  But it doesn’t smell like phony strawberries, so there’s a big plus. 🙂 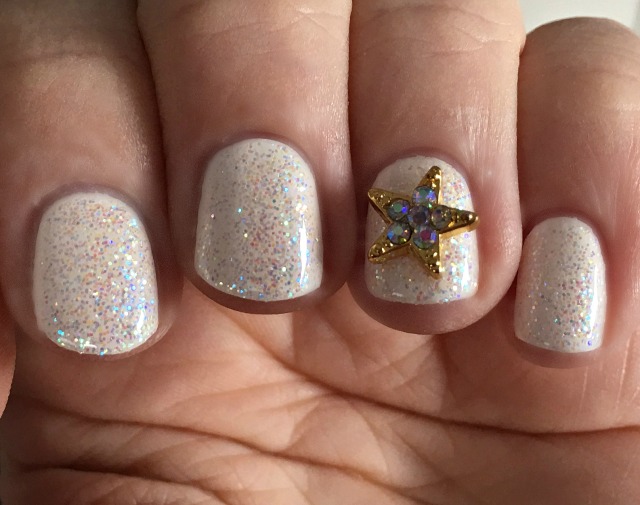 I commented in a post last month that one of Disney’s colour trends of 2018 was this sort of blue-leaning iridescent hue that looks as though everything has been iced with pastel rainbows.  Seems I really took that particular trend to heart, because a quick glance around my apartment turned up a dozen or so items in this exact finish, ranging from shimmery makeup and a glossy new day planner, to barware, candle holders and even a stack of 20-year-old dessert plates! 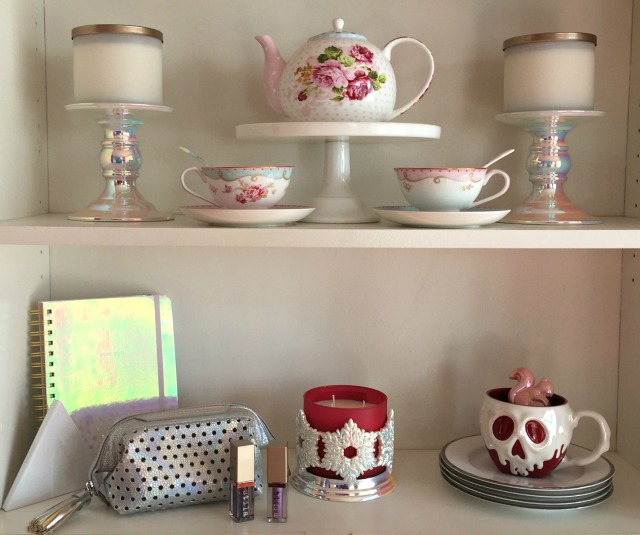 I adore my new planner!  Nabbed this pretty at Chapters for $5 a couple of weeks after Christmas (small tip when it comes to purchasing things like calendars or day planners: If you don’t absolutely need one for the first couple of weeks of the year, hold off until they come down in price – usually about 75% – in early to mid-January.) 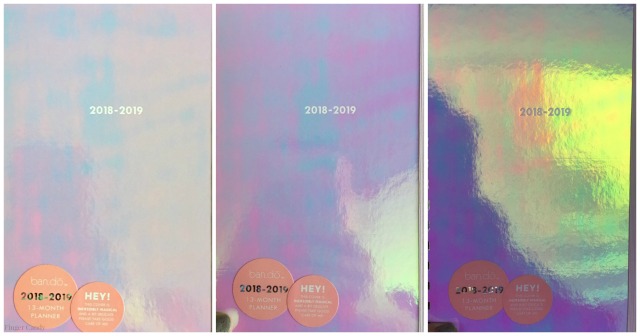 Even my daily water intake has gotten into the shimmery, iridescent action, courtesy of my cool new Starbucks tumbler.  The reflections on the surface of the water remind me of the brew Dumbledore chokes back in the Inferi-beset Crystal Cave in Harry Potter and the Half-Blood Prince (you know, just ever so slightly less poisonous and insanity-making.) 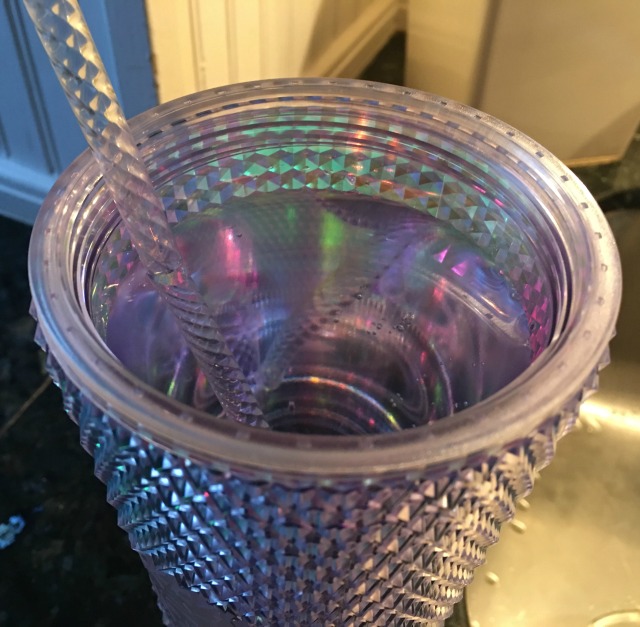 And on the hot side of the beverage spectrum, we even have my new poison apple mug, positively dripping in a shimmery, iridescent glaze.  So pretty. 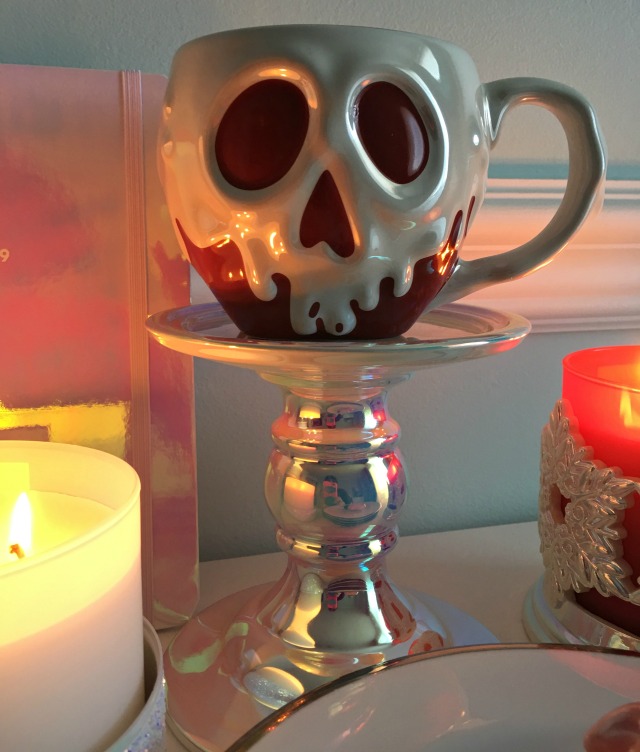 And one of these days I will find a bottle worthy of this iridescent stopper my mom gave me some years back, fetchingly outfitted in the finest of squirrel fashions (perched on those Pier 1 dessert plates, most of which have lost their silvery rainbow lustre over the past 20 years of hard use.  Knock on wood, but I’ve never broken a single one, and I STILL, to this day, lament not purchasing all of the dishware available in the collection when I had the chance.) 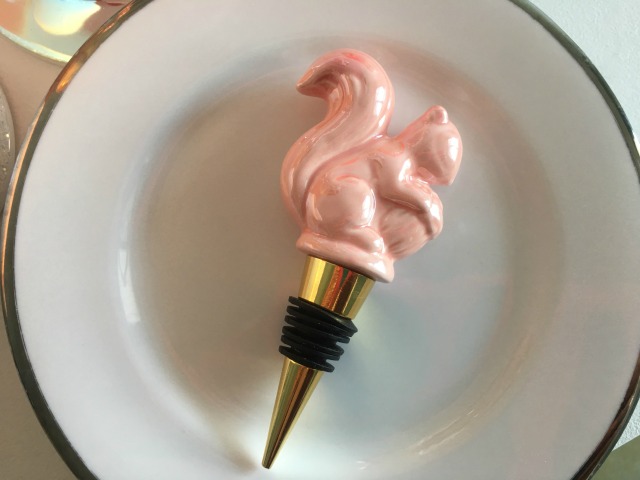 And with that, time to venture out into the true iciness of this Monday morning, some pretty, mood-boosting iridescent goodies in tow.  Happy week, friends – I hope it’s shiny rainbows every single day. 🙂