So here’s that thing I was so very proud of that I wanted to show you, but first needed a something to show, but the something got caught up in transit, and so I had nothing to show.  Thing thing thing, show show show!

*Ahem* So the thing I was so very proud of – the physical proof of which was indeed caught in a sort of transit – is that thanks to our year-long diligence in cutting back, watching our spending and enjoying that which we already have, we were able to become Disney World annual passholders!  That’s kind of big deal, right, it’s not just my imagination? 🙂  But for what we have planned for the next 365 days, it made the most financial sense, and that’s on a cost-of-tickets basis alone; the extra little perks like money off dining, merchandise, entertainment and accommodations and special, passholder-exclusive offers are just that – extra little perks (and already well-used, thanks to our Labour Day long weekend trip!)

Anyhow, it’s been a donkey’s age since I’ve done any nail art, and so I thought I’d do a manicure celebrating this awesome – and awesomely fun – financial milestone.  I am so, so proud of us for making this happen, as silly as it may seem.  Which I bet to many of you is very silly.  And I’m cool with that; the Peter Pan approach to life is not for everyone.  But consider that Mr. Finger Candy and I have decided to just get out there and fully immerse ourselves in the Deep Disney State – anything we can do to save money while we’re out being dorky dreamers is going to be a help. 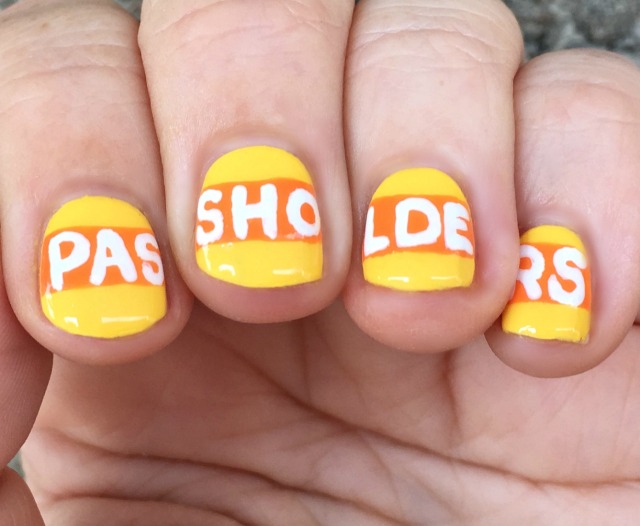 TL;DR: While year-long passes to four of the world’s most popular theme parks may seem like a gigantic financial leap, it’s a chasm we easily crossed thanks to our very best efforts in reining in our spending and dedicating everything extra to this one financial goal.  I love that we worked toward a goal and met it.  Gotta say, it feels pretty darn great!  Just like these nails – I’ve missed doing nail art, must really aspire to feature more of it here on this, uh, nail art blog. 😉