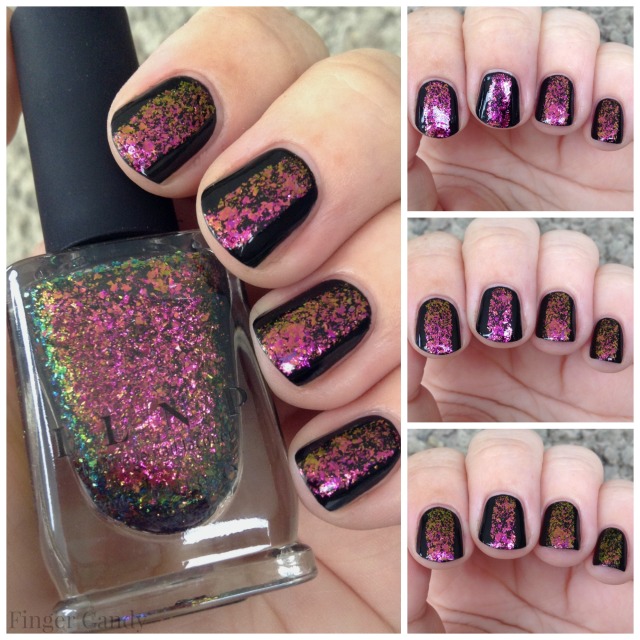 This simple manicure features one of my favourite high impact, low effort nail art techniques, with a bit of a flakie twist. Here I brushed on two coats of a super high shine black polish before topping it with two coats of ILNP’s chromatic flakie, Electric Carnival, in one strip directly down the centre of each nail. I then topped the whole works with one coat of Seche Vite to enrich the shine and deepen all that gorgeous, colour-shifting flakie goodness. Aaaannnndddd that was it, the end! Dead easy, right? I wish I had more to add, but that’s the beauty of this kind of manicure, so let’s not question it too much, okay?!

I will add that ILNP’s flakies provide full coverage in two coats all on their own, although I prefer pairing them with a dark base in this elongating, less-is-more approach. I also like the way darker polishes offset the colour-shifting flakies, throwing off beautiful chromatic rainbows without being ridiculously over the top. Remember, a good manicure means never having to say, “I’m sorry I blinded you with my nails.” 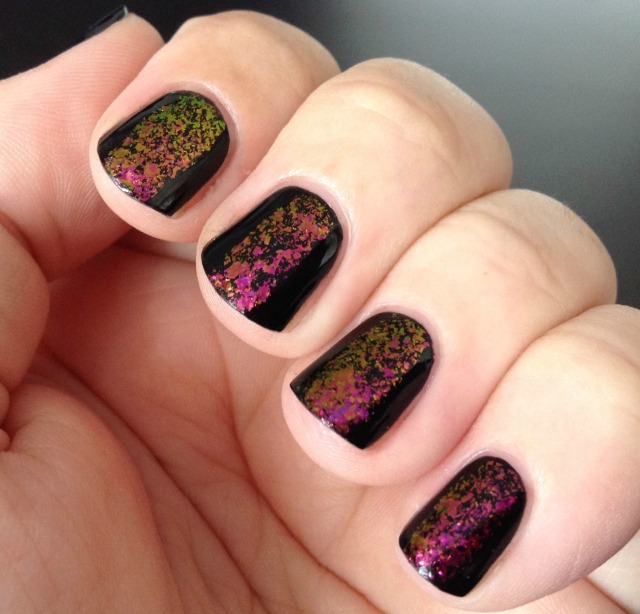 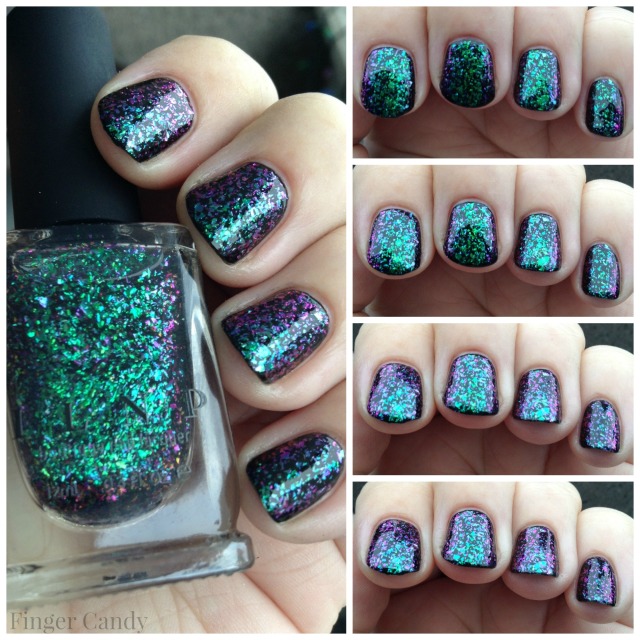 Yesterday’s post showing off the colour-shifting beauty of I Love Nail Polish’s Electric Carnival proved so popular (“WOWZA” was the general consensus in the comments) I thought I’d come at you today with another beauty from their ultra chrome collection, this time the sublimely peacock-hued Supernova.

Everything great about Electric Carnival thankfully holds true for Supernova – gorgeous colour-shift, smooth, even application, lightning fast removal – although Supernova’s somewhat tone-on-tone (on tone) green-to-turquoise-to-purple-leaning flakies don’t throw off the same insane rainbows as Electric Carnival, a small nit to pick for an otherwise gorgeous polish! Fans of the “mermaid look” will also like this polish – the colour-shift is actually quite Ariel. 🙂 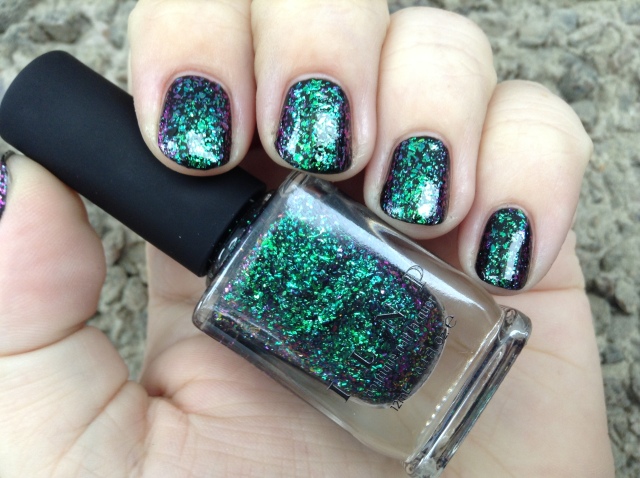 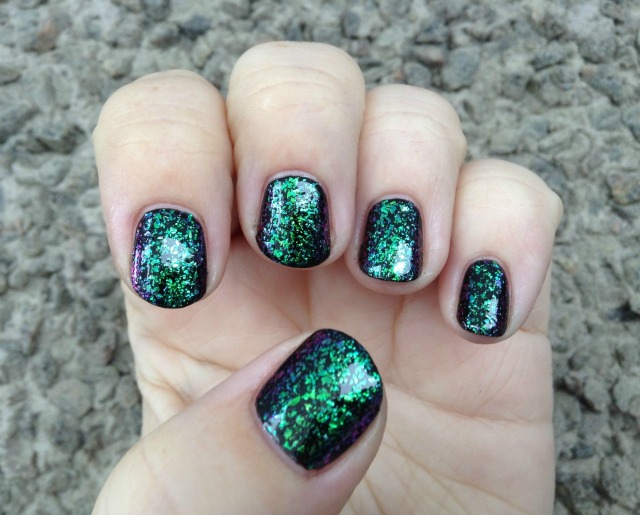 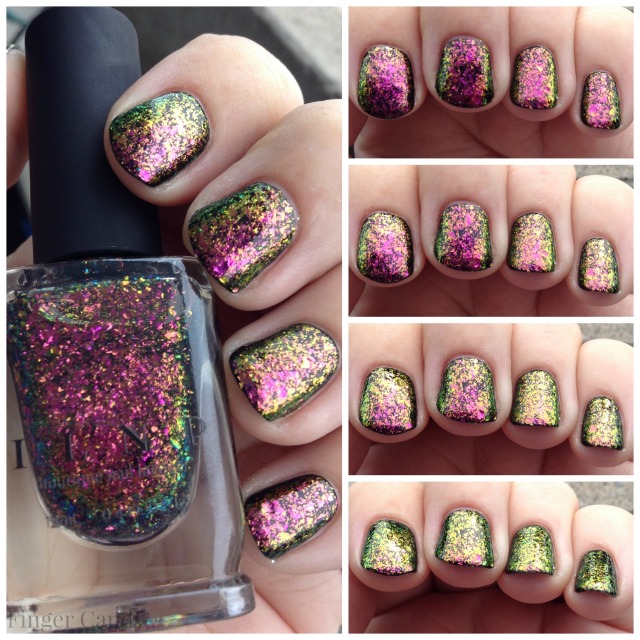 Still primarily the domain of the indie polish market (you know how this goes – look for flakies to appear in your favourite commercial lines in about two years’ time) flakies are king, and indie polish manufacturer I Love Nail Polish (ILNP) is producing some of the best.

This is Electric Carnival, a plum-to-gold-to-green “ultra chrome” stuffed with colour-shifting metallic flakies. The colour change in this one is quite pronounced, particularly when layered over black, as I’ve shown here, although you could absolutely build it up to full opacity in two coats on its own. The consistency itself is a touch thick compared to other flakie toppers, with that perhaps being the difference right there – other similar flakies I’ve purchased have been glitter toppers, whereas Electric Carnival is a true full coverage polish. But aside from the gorgeous rainbow effect these polishes produce – Electric Carnival in particular, with its touches of indigo blue at the furthest edge of the spectrum – I think my favourite thing about these metallic flakies is the ease with which they’re removed. Unlike iridescent flakies, which have the aggravating habit of sticking resolutely to your bare nails many days and manicures later, these ultra chrome flakies wipe right off just like a regular creme polish, a time (and sanity) saving advancement in nail polish manufacturing.

Electric Carnival has a lot of gorgeous sisters, I regret to inform your wallets. But if you think you can exercise even an ounce of self-restraint (or not – self-restraint is overrated when it comes to buying polish) you can find ILNP’s gorgeous products here. 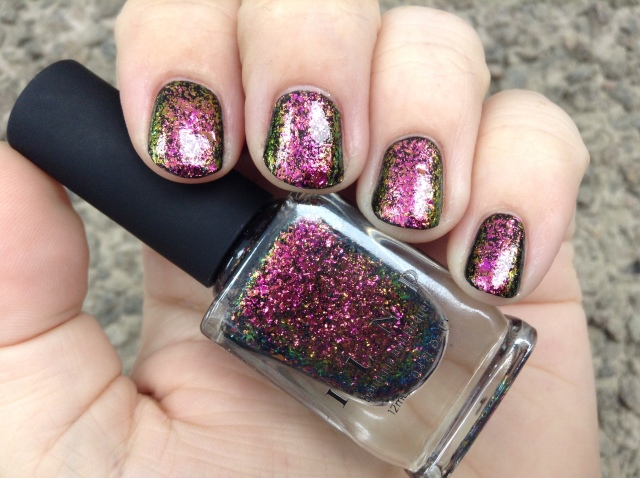 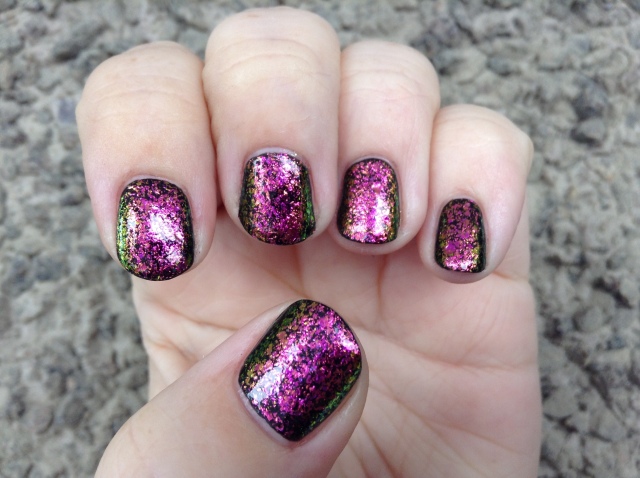