It occurred to me the other day that one of my favourite nail art designs, a chicken scratch sort of knit pattern, also looks a great deal like tire tracks.  So as these things go, twas but a hop, skip and a jump later before I was elbow-deep in lacquered tire treads, here Lilypad Lacquer’s holographic Rainbows in Space over Essence’s Color & Go in Chic Reloaded, a shimmery green-to-grey-to-purple multichrome that (quite appropriately for this manicure) reminds me of an oil slick.

Then because I can’t ever leave well enough alone, and also because my monochromatic tire track design was looking a bit bare, I laid down two silver spiked nail charms right at the edges of my cuticles on my middle two fingers.  Et voila, a spike strip!  Nail art punnage at its finest, folks.  But all the same, just know I’ve got my eye on you, crash queens and moto babies, and drive safe. 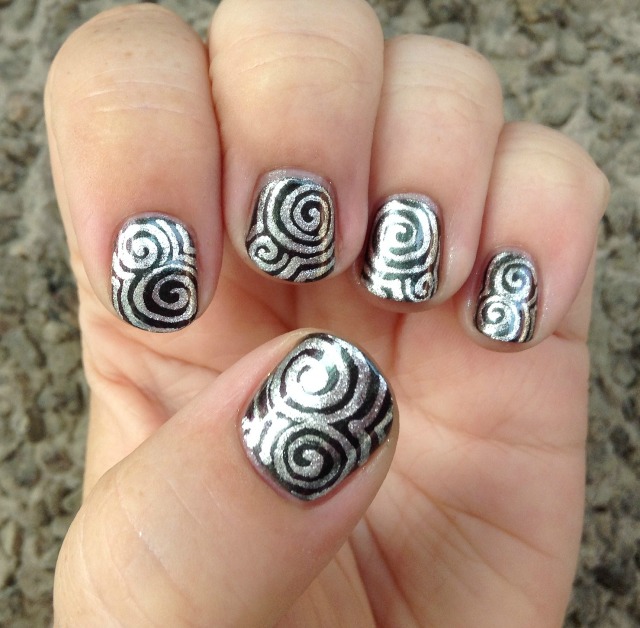 This swirly manicure is coming at you a day late and a (silver) dollar short; I simply had no fuel in the nail art tank yesterday and needed a day’s respite. But now I’m back at it, and catching up to day three’s Oh Mon Dieu Nail Art Challenge theme of silver with one of my favourite nail art techniques, freehanded swirls. For these hypnotic-looking nails, I topped two coats of Essence’s Colour & Go in Chic Reloaded, a purple/green-tinged grey duochrome, with some random swirls in OPI’s silver foil My Signature is “DC”. I always think this type of allover design looks like nail wraps, although if you get close enough, you can see the little imperfections that make free-handed designs a little purer, in my totally biased estimation!

When I chose this lacquer, Polish Me Silly’s green glitter and everything else X-Mas Me Silly, as an un-favourite for week four’s theme of least favourite polish in the February N.A.I.L. Challenge, I had no idea it would lead me towards what is perhaps the ugliest manicure I’ve ever done. But not to worry – it was all on purpose!

The general theme here is my neighbour’s Christmas tree, which from my vantage point in my livingroom I can see plain as day in his. News to absolutely no one, but it is the end of February. That is some quality laziness right there (although my husband thinks he might be a snowbird, and took off for warmer climes immediately after the holidays.) The thing is undoubtedly artificial, which would partially explain its livingroom longevity, but can you imagine if it’s not? Dead/wood City, that’s what.

So with X-Mas Me Silly, a too-much-of-a-good-thing glitter from Polish Me Silly’s 2014 holiday collection, acting as my least favourite chosen one, I drew inspiration from my neighbour’s everlasting ode to the holidays and came up with this gradient mani that’s meant to look like a Christmas tree starting to brown around the edges.

Which would have been ugly enough all on its own had I not chosen to use two other polishes on my hit list of hate, Essence’s bile-hued L.O.L. and OPI’s brown A-Taupe the Space Needle. I colloquially refer to these two as “Neon Pee” and “Electric Baby Poo.” These are some of the ugliest colours in existence, although oddly enough, I use them both for nail art detail work all the time.

But I maybe should have left them out of this doomed-from-the-start mani, because the combination of lumpy X-Mas Me Silly over the sickeningly-coloured L.O.L. and under the greenish-tinged A-Taupe the Space Needle is a truly horrendous one. It reminds me of a Christmas tree all right – a Christmas tree in a basement that’s backed up with about two and a half feet of sewer water. This was a super fun challenge prompt, but I can’t wait to scrape this green gunge off my nails!

It’s not every day that I post a “normal” manicure that hasn’t been themed to within an inch of its life, but after a recent rash of holiday manis, I thought I’d take a break from my usual Tim Burton-esque approach to nail art (is there a single frame not filled with something? Then fill it with alllll the things!) with this simple, striping tape-enabled starburst design. I’m generally not one for getting all tangled up in wads of striping tape, preferring to keep my work predominately free-handed, but I wanted the silver starburst points (OPI’s sparkly silver foil, My Signature is “DC”) to be crisp and clean against the glittery blue background (Essence’s It’s Raining Men!) And because gradients are pretty (and pretty effective), I thought I’d throw in a couple of them, too.

Okay, who remembers Cinnaburst gum? Wait, is Cinnaburst even something we should be talking about in the past tense, or is it still in production today? I can’t remember having seen it at a store in ages. Right, you wait here and I’ll be back in a jiff. *scampers off to consult Google*

All right, here’s what I’ve gleaned about Cinnaburst chewing gum via the almighty interwebs. Firstly, I’m spelling it wrong. Its official spelling is Cinn*A*Burst, which puts it in contention for the award for dumbest use of a symbol within a proper noun (see also Ke$ha and, of course, Prince, whose name for a while there was nothing but a symbol.) Secondly, it seems as though it *might* still be in production and *may* still be available at certain specialty and/or out-of-the-way shops, although there’s precious little information about it online (the most common Google search amongst only 11,000 entries was asking where on earth one might procure a pack of the stuff.) Thirdly, and finally, the last nail in the Cinna-coffin seems to be an overwhelmingly large number of “Does anyone remember Cinnaburst gum?” posts with links to tragic fads and fashions of the ’90s. To answer the question, no, it appears as though no one does remember Cinnaburst gum.

Except me! Because I loved the CRAP out of that stuff. It was a stick gum that was studded with these weirdly delicious and gritty little flavour crystals that would snap when you chewed, sending little bursts of cinnamon-flavoured food additives shooting into the back of your throat like super low grade Pop Rocks. It ran out of flavour in about five minutes flat (but really, what gum doesn’t?) and only came in packs of five or six sticks, so you were forever running out, but damn, that gum was great.

And so like I always do when I determine that something is great, I paint it on my nails! Here I tried a smoothed-out textured jelly sandwich (if that’s not a new nail art animal, I don’t know what is) to get that vaguely sparkly, red-speckled look of a stick of Cinnaburst. I went by the usual jelly sandwich method, using a light, sponged-on coat of Cinapro’s Nail Sugar in Cherry Cola in between two coats of a sheer, glitter-infused textured polish, Essence’s Hey, Nude! The texture on Hey, Nude! is quite fine, so it wasn’t necessary to add a topcoat, although I like the way a coat of Seche Vite adds depth and brings out the lovely silver and red sparkles in the mani (sorry, flavour crystals! I mean flavour crystals.) 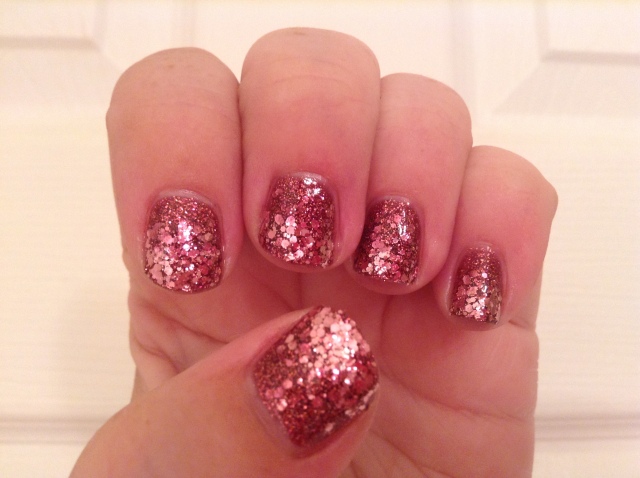 Ombre shading, day 19’s theme in the Oh Mon Dieu nail art challenge, is often confused with its cousin, gradient shading. And for good reason, as both techniques involve gradually building up a colour (or colours), blending each shade into the next as seamlessly as possible. Both can also be achieved through a wide range of nail art techniques, from sponge painting to brushwork to glitter placement.

Where ombre shading deviates from its sister-technique, though, is in colour palette. Gradient shading can utilize any number of colours, so long as you can find a way to make one blend into the next without creating a giant, muddy mess, whereas ombre shading seeks to take one single colour through the full spectrum, from light to dark and maybe a couple of stops in between. Think that tie dyed linen maxi-dress your weirdo hippie aunt wears that starts off baby blue at the top and then moves through sky blue and cerulean at her waist before finishing off navy blue at her ankles. That’s ombre shading.

While ombre shading is not strictly limited to the gradient technique (a manicure in which you go from, say, eggplant on your thumb to pale lilac on your pinkie would also be considered ombre shading), I find it to be the best technique for blending two tonally similar colours, particularly when they are as close as the two polishes I chose for this manicure, Essence’s rose-hued Time for Romance and Essie’s Lux Effects glitter topper in A Cut Above. Technically speaking, there’s not much to this megawatt mani but for the delicate gradi-ombre colour change, a foregone conclusion when I realized I had a clear glitter topper that matched the shimmer in the base polish very nearly perfectly in both texture and colour – just a tone or two off, which was of course exactly what the challenge theme was asking of me. As always, maximum impact for minimal effort? Sign me up!

Day 16’s theme of glitter placement in the Oh Mon Dieu nail art challenge was a particularly inspired one (past tense, because of course I’m three off the pace) with all participants submitting amazing entries, particularly challenge hostess Craftynail, who blew me away with her monarch butterfly glitter nails (really, go check them out; they’re spectacular.)

I suppose “glitter placement” could mean all sorts of different things to different nail artists, from glitter polish gradients to individually hand-placed sequins. I chose the latter, topping a couple of coats of Nails Inc.’s Royal Botanical Gardens (which itself was topped with Essence’s rainbow holo glitter, Space Queen) with a sprinkling of neon hexes and dancing butterflies. It was nit-picky, painstaking work wrangling all that tiny glitter, but not unduly difficult. Just remember that patience is a virtue when dealing with tiny piles of microscopic glitter that want to creep into everything you own. Seriously, glitter gets in your everything.

A quick note on glitter for use in nail polish-based projects. Whether you’re making your own (I can’t recommend it enough when you’ve got a polish in mind that just doesn’t exist) or using it as a nail art enhancement, you’ll want to use solvent-resistant glitter. I got my polish crafting glitter from a couple of different Etsy retailers, although you may be able to find a small selection at your local beauty supply. Standard craft glitter (like that in the 35-shade kit I have never, ever used but needed very badly, because apparently I was going to glitterize the WORLD) can be used, but be prepared for some pretty epic colour-bleeding and, in extreme cases, glitter melt. And no one wants to experience the terror that is glitter melt, let me tell you.