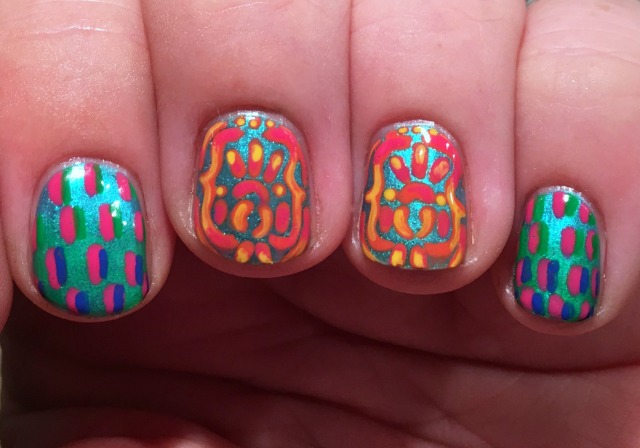 Day 13’s theme in the 31 Day Nail Art Challenge called for an animal print, which I naturally interpreted as a fish print, because I’m tired of leopards and zebras and tigers, and I’ve been meaning to redo an earlier parrotfish design of mine for ages now.  And yes, I realize parrotfish – or fish of any description – are not animals in the sense most likely contemplated by the challenge theme, but when there’s a critter this gorgeous and colourful bombing around the world, its exact taxonomy really amounts to a hill of beans now, doesn’t it? And that’s a lesson I think we could all stand to learn, on land or by sea, fish or fowl (but especially the foul.)

These very detailed nails look a bit more stylized than the average parrotfish, though, whose heads and bodies are covered in abstract markings.  But the colourful spirit is the same; parrotfish are some of the prettiest peacocks in the sea with their shimmery turquoise scales and fuchsia, jade green, orange, yellow and cobalt markings, and these nails are not too far off colour-wise from the actual fish.  Beautiful! 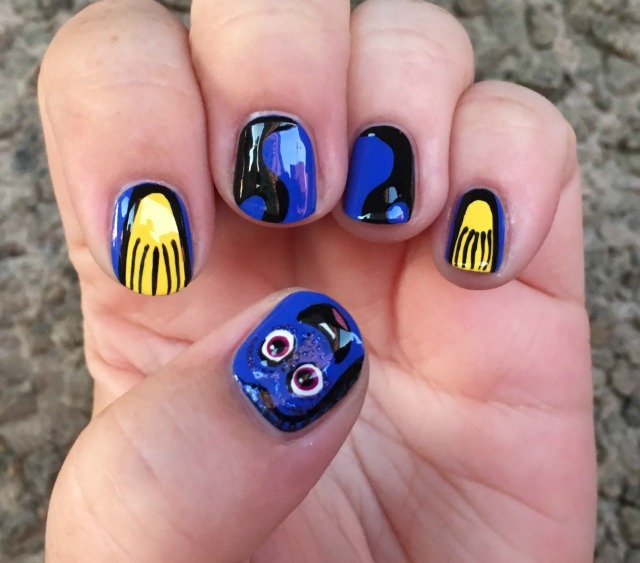 So Finding Dory is going to make allllllll the movie money this weekend, yes?  Not bad for an animated Blue Tang with short-term memory loss.  And so in honour of the little blue fish that could, I thought I’d update an earlier Dory design of mine that I always felt was not quite up to snuff.  Besides, in that last manicure, she didn’t even have a face!  I didn’t do faces with my Disney designs back then, mostly because I’m sort of terrible at recreating animated figures.  I’m not sure *this* face is all that better, because as it turns out, drawing an animated fish face dead-on is actually pretty difficult!  But I do love Dory’s fins and the markings I painted on my other digits, mostly because cobalt, yellow and black together are just spectacular.  Quite the fetching fish, that Dory. 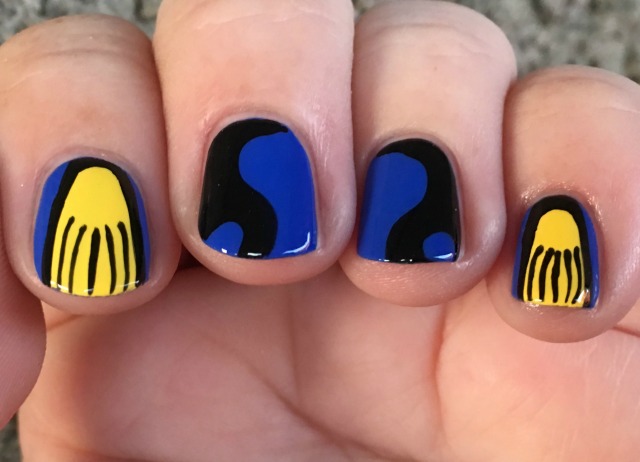 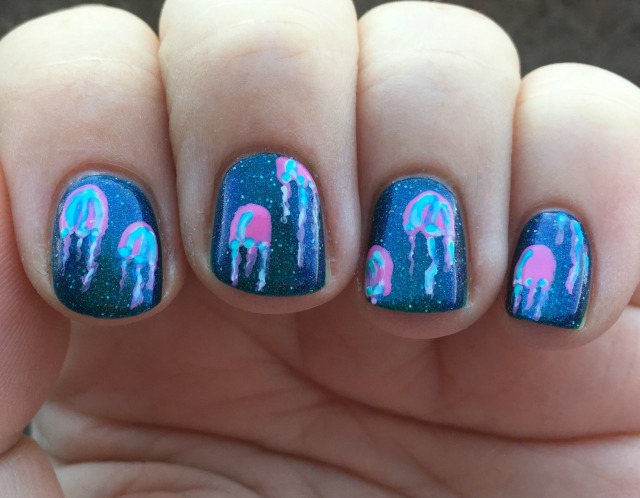 Just some gently bobbing jellyfish, going along with the flow (the flow being Enchanted Polish’s wonderfully watery Neptune, a green-to-blue duochrome that reminds me of the ocean’s inky depths.) 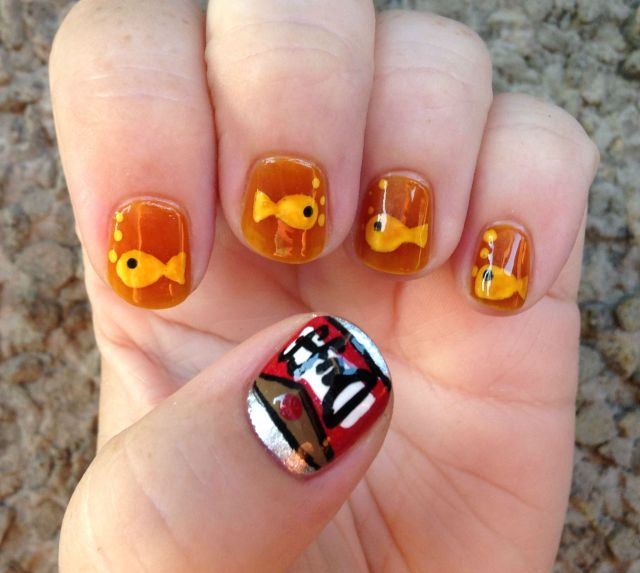 I’m a theme park nerd and Simpsons fan more or less in equal measure, and I’ve always taken great delight in the episodes where the Simpsons clan go to an amusement park, lampooning the genuinely magical, but ultimately financially-driven, nature of the Disneys and Universals of our world. I think the episode where the Simpsons fight off a roving band of murderous, off-program animatronics at Itchy & Scratchy Land might be my favourite theme park-inspired episode, but I also love – as do so many; it’s a classic for a reason – the 13th episode of season 4 in which Marge’s sister Selma takes the Simpsons kids to Duff Gardens, a Magic Kingdom-esque amusement park run by the Duff Beer Corporation. There’s all the usual Disney-type tropes at work here – endless parades, beleaguered costumed characters and “It’s a Duff World,” an “It’s a Small World” parody whose toxic waters bear hallucinogenic properties – although they also bring Sea World into the mix with the introduction of the Beerquarium, a suds-filled aquatic habitat filled with, apparently, “The World’s Happiest Fish!” Except they really don’t look so happy, listlessly circling the tank belching, groaning and trying not to vomit.

Anyhow, when day 14 of the Oh Mon Dieu Nail Art Challenge called for the theme of fish, I decided to do a Simpsons-inspired manicure featuring the drunken fish of Duff Garden’s Beerquarium (although later in the episode a character references something called a Fermentarium, which has to be the same thing, right? I move to change the name to Fermentarium on the grounds that it’s much funnier.)

I did these nails using the very-appropriate-in-these-circumstances pond manicure technique, this time encasing the inebriated fish in multiple layers of an amber-hued jelly polish, Nfu Oh’s JS39, instead of Duff Beer. Not really sure which one might be less toxic. 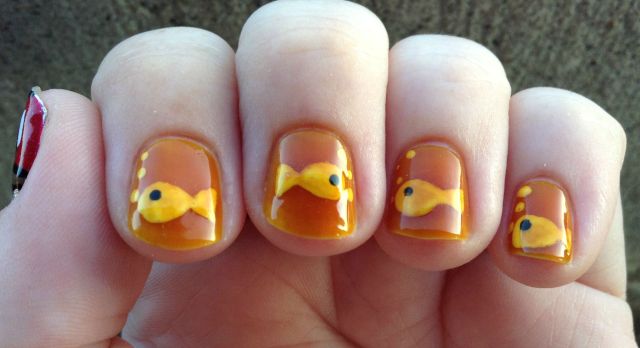 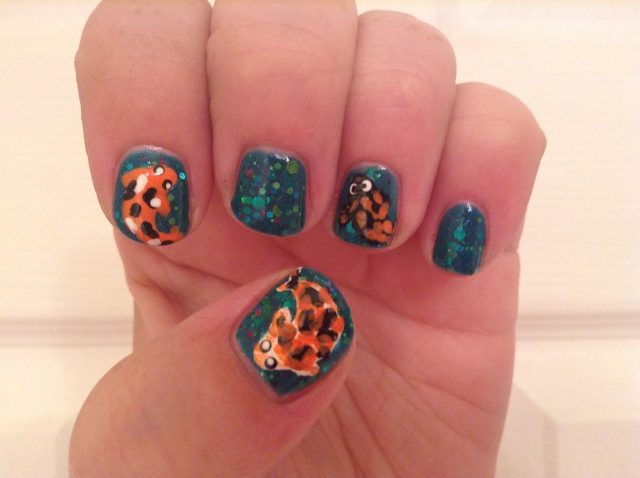 Or do be koi; they’re awfully pretty fish. I don’t know your life. 😉 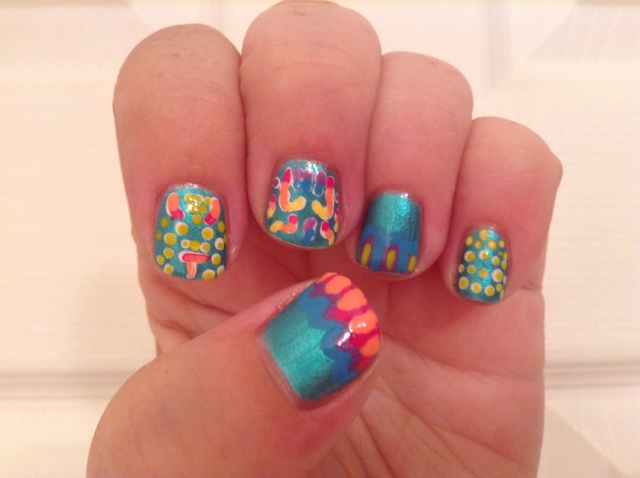 Parrot fish, that is, and my pick for day 21’s theme of animal print in the Oh Mon Dieu nail art challenge. And yes, I realize that fish are not animals in the strictest, most sciencey meaning of the term, but here’s my basic criteria for determining whether something is an animal: Is it a small relation of a larger critter that we adopt into our families and house in our homes? Then it’s an animal. So fish totally count, according to my highly technical definition. The parrot print stays! 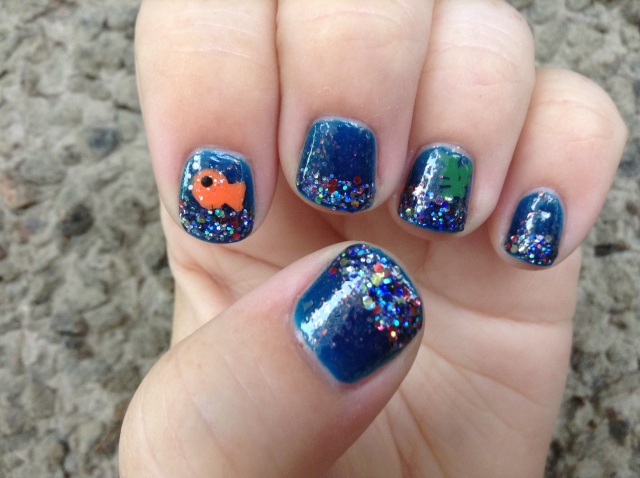 When I was a kid, I had a goldfish named Fred. Actually, I initially had two goldfish, Fred and his bowl-mate, Ted. But two weeks into their Odd Couple-esque living arrangement, Ted went belly-up, a suspicious chunk nipped out of his orange hide. Clearly not taking Fred’s act of cannibalistic aggression all that seriously, my parents purchased another fish, because surely Fred was lonely and wanted some company! Except no, he did not, and a couple of weeks later Fred’s potential BFF, a fish we very imaginatively named Ed, was also found floating at the top of their bowl as Fred swam innocent-looking circles below. With that, my parents finally acquiesced to the truth that I had known all along – Fred was a straight-up psychopath!

So we decided to stop playing fish matchmaker, and Fred very happily lived his remaining eight years – yes, EIGHT – as a “Me, myself and if you come near me, I’ll eat you” type of bachelor. I like to think he enjoyed his life, such as it was. These nails actually represent Fred’s spartan living conditions pretty well – rocks, plastic fern, water. What can I say, Fred was a minimalist. 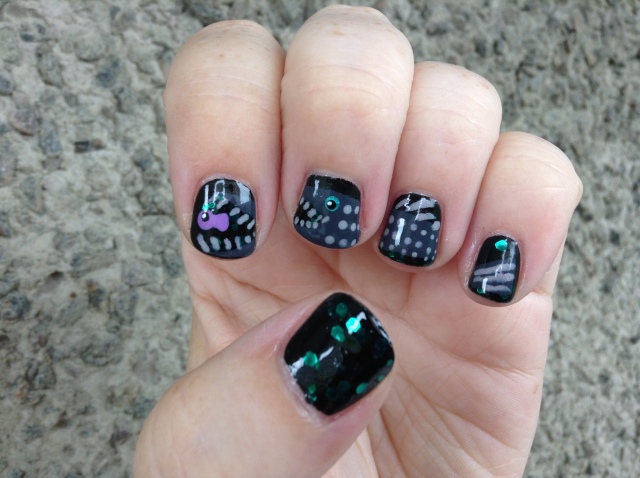 I’m still laughing at the biological improbability, shall we say, of this barracuda-esque sea creature I painted across my nails – it looks like he has two fang-riddled mouths, one right in front of the other, like a silencer, only bitey. Well, no matter the configuration of his mouth, I’d say that little fishy there has, well, bigger himself to fry if he doesn’t zip out of the way, and pronto.