Kaltxi!  And welcome to what I’m sure you are hoping is going to be one of the final posts you have to endure on the subject of my Christmas trip to Disney World.  Except I still have so much to say!  Particularly on the subject of a very special (and very, very busy) place we visited at the Animal Kingdom on the final day of our holiday, Pandora – The World of Avatar (I’m sold already; gotta love a title that contains a hyphenate.)

The World of Avatar opened in June 2017, and just seven months on, it remains THE hottest ticket in the entire Walt Disney World Resort.  And I do mean that literally – FastPasses were not to be had for Flight of Passage, the most popular ride in any of the Disney parks, although I did manage to nab early evening FPs for Na’vi River Journey, a stunningly gorgeous dark boat ride, and my pick for the better of the two attractions anyways (hard not to go with the one that didn’t make me want to hurl all over the back of a banshee, but more on that in a second.)

Right, so before I get to the breathtakingly beautiful landscape and design work (Disney calls this “Imagineering”) let’s get to what I know you’re really here for, TIPS AND TRICKS ON HOW TO TACKLE PANDORA – THE WORLD OF AVATAR WITHOUT LOSING THREE-QUARTERS OF YOUR DAY AND/OR YOUR SANITY.

Staying at a Disney resort also gives you access to Extra Magic Hours, extra in-park time extended to guests of Disney resorts either first thing in the morning or last thing at night.  Find out which day the Animal Kingdom is offering their Extra Magic Hours (owing to what I’m assuming are the actual animals’ nocturnal schedules, they tend to offer them first thing in the morning) and get there early with a mind to hitting Pandora.

No, really, get there EARLY.  Earlier than you think reasonable.  If you’re taking Disney transportation, you’ll find yourself sitting at a dark and foggy bus stop at 6 in the morning with 100 other stressed out people (and that’s just your resort!) also all fretting  about how quickly they can sprint through the Animal Kingdom and directly onto Flight of Passage.

I actually really wish that my fellow guests would not do this.  Moods at Disney are highly contagious, and listening to some teenager joke-mock his walker-enabled grandmother about the hustle she’s going to have to put on the second they step off the bus is dispiriting.  Listening in on other people’s neuroses leaves me feeling highly anxious and unnecessarily fretful.

So it turns out my very best tip is actually to calm the eff down.  Please.  With our ultra early start to the day, we were on and off Flight of Passage in a little under 45 minutes.  And our evening FP for Na’vi River Journey freed us up to then explore the rest of Pandora, and indeed the entirety of the Animal Kingdom.  So no need to go all wackadoo.

Having said all that, I am so freaking glad we got that jump start to the day, because by the time we exited the ride 45 minutes later, the wait time had climbed to three hours.  An hour later the estimated wait time had vaulted to five incomprehensible hours and the lineup stretched all the way to the front gates.  When we took this picture, roaring in front of the Tree of Life, we were feeling quite pleased with ourselves for having conquered at dawn what everybody else was now going to spend the entire day slogging to complete.  Mean?  Maybe!  But the early bird rides Flight of Passage with only a 25-minute lineup. 🙂

Less roar-worthy is the fact that Flight of Passage KICKED MY ASS.  It’s a motion simulator, and a deeply immersive one at that – the screen wraps from top to bottom and then side to side.  The story is that you’re riding on the back of a flying banshee through the alien landscapes of Pandora.  Sounds incredible, and I can confirm that the minute or so of ride I actually experienced was next level amazing.  But oh sweet Jebus, the plummeting dips and drops and that nauseating thrusting motion of takeoff and the gigantic, sloshing wall of water…oof, I may need to stop talking about this, right now. 😦

So yes, I closed my eyes through roughly 60 percent of an attraction that I waited half an hour to ride and that some people waited up to five hours to ride.  But I felt myself begin to break out into a cold sweat, my number one tell, and decided to instantly bow to the warning signs I was too daft to heed on Star Tours.  You’re welcome.

I actually have precious little footage from the exterior or interior of either ride; we really hustled through both lineups, and there was no time to stop and smell the alien roses.  But Na’vi River Journey was definitely the more palatable of the two rides for me, a return to those classic, ultra detailed dark rides that have always set my Disney-loving heart aflutter.  Plus, Na’vi River Journey just looks like the best rave you’ve never been to.  Kind of sounds like it, too.  Gosh, I wish I had pictures of this one – it is a boat ride through a black lit, neon alien jungle, and that’s just as pretty as you might imagine.

We quite shamefully made incredibly poor use of Pandora’s other amenities.  We didn’t go to Pongu Pongu for refreshing Night Blossom slushies and we also didn’t get to Satu’li Canteen for what is some of the only vegetarian food in the Animal Kingdom (for a place devoted to caring for all manner of wildlife, I find their reliance on BBQ to be quite odd.)  I blame Flight of Passage – my best laid Pandoran food plans went out the window the moment I emerged from the ride whiter than a ghost and (as always) cursing James Cameron’s name.

This is the part where I should probably mention that I hated Avatar, the movie.  Like, LOATHED it.  And I will never not be boggled by its inexplicable (clearly just to me!) popularity.  I remember when I first heard about the blue kitty person movie that James Cameron was making, I said to Mr. Finger Candy, “Mark my words, this thing is going to make, like, $17.38 total.”  And I was wrong.  So very, very wrong!  Wrong to the tune of about $2 billion, but hey, you can’t have $2 billion without $17.38, right?  Anyhow, my seeming ineptitude at making box office projections aside, I really, really hated Avatar and I’ve watched maybe just 35 minutes of the stupid blue kitty people total (side note: Do you know how hard you have to work to get me to hate a cat?  Even an 11-foot tall blue cat with a pervo tail?  HARD!) 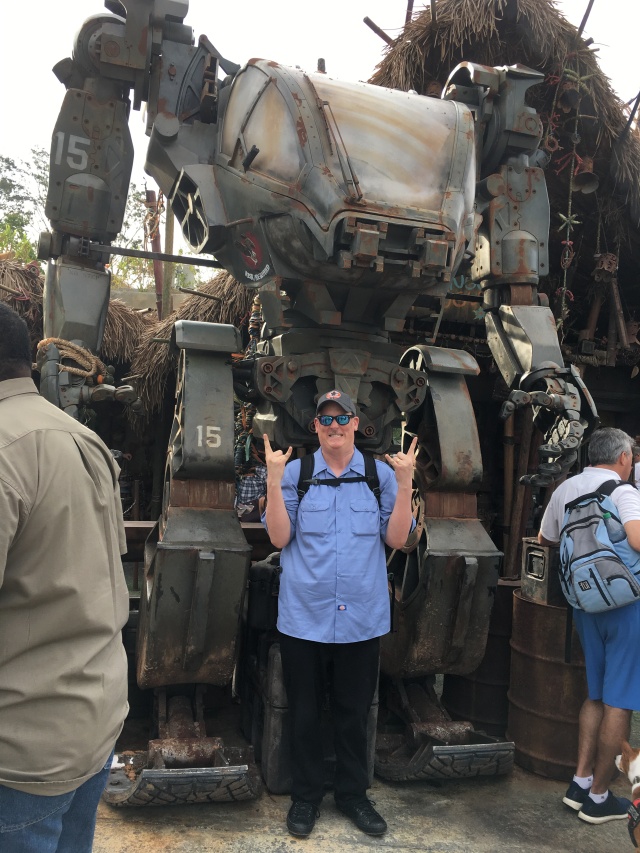 But I was neither too nauseous nor so much of a hater that I couldn’t appreciate the outstanding Imagineering at work in Pandora – The World of Avatar.  Holy cats (11-foot blue cats?) this place is incredible!  And no matter your area or areas of interest (horticulture, set dressing and design, food, music, computer tech, storytelling and world-building, architecture and engineering or simply the films themselves) there’s a little something for everyone to be dazzled by in Pandora.  I was particularly taken with the floating mountains, which I know are no such thing – I watched enough videos of them going up to know they’re engineered marvels of rebar and concrete designed to look like a craggy, levitating precipice.  But when you’re standing beneath a giant, floating chunk of earth, out of the top of which is growing a massive alien tree, its gnarled roots draping down over the edges and bursting through the underside of the rock, it’s hard not to be impressed. 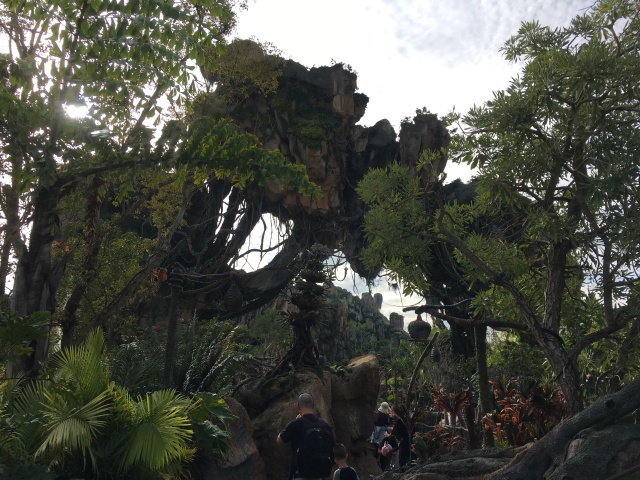 I kept thinking how much my grandfather, a lifelong gardener, would have loved the seamless blending of our real world flora with Pandora’s Imagineered alien blooms. 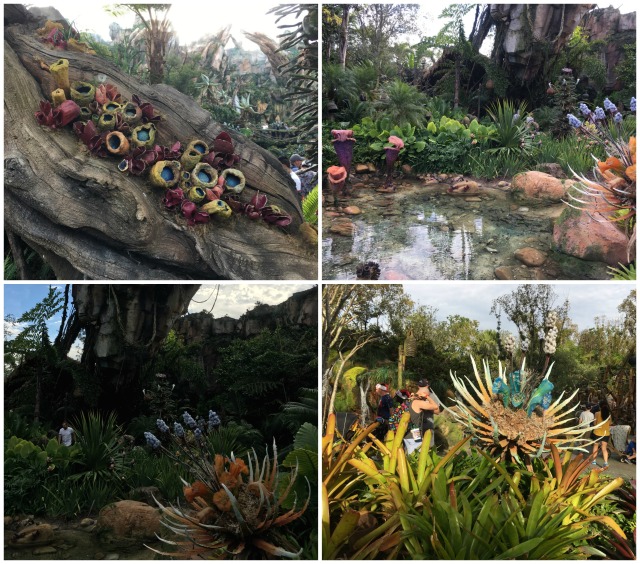 Ah, yet another way to tell you’re getting on in years – when the behind-the-scenes, technical aspects of a theme park are more interesting to you than the actual attractions (see also the Seed Tour at Epcot’s The Land, where you take a mini class in Disney agriculture.)

It’s really just the most stunningly gorgeous world, and so very beautifully executed.  I wish we had been able to stay into the evening when Pandora begins glowing under black lights, the “bioluminescent plants” throwing off alien neon light.  Even the splatter effect walkways (already super cool in the daylight) glow after dark!

And the waterfalls!  Oh my gosh, so many waterfalls!  I feel like this entire post has been me excitedly pointing out yet another thing that blew my mind about Pandora, but that’s exactly what exploring the World of Avatar was like in the first place – what gorgeous, infinitely clever marvel will I find around this next corner?

It seems the World of Avatar also brought out the Pepe Le Pew in Mr. Finger Candy, who laid a giant one on me as we stood in front of a lush Pandoran pond, prompting the cast member taking our photo to mock-admonish that “this is a family park!” and for a nearby group of Japanese tourists to spontaneously burst into delighted applause. 🙂 Apparently Pandora is for Lovers.

So would I go back, even knowing what I know about my ability (or lack thereof) to handle Flight of Passage?  Yes, if only to cover myself with about two dozen anti-nausea patches to see if that makes a difference.  But also to check out some of the food and beverage offerings, and get a glimpse of Pandora after dark.  It’s also just a lovely and beautiful spot to chill out and people-watch for a bit; all those waterfalls make for a very relaxing place to wile away a bit of time.  Big recommendation on the World of Avatar; Disney, not too surprisingly, done good. 🙂