Except shhhhh, don’t tell Woody (’cause you know he’s just going to make a great big thing out of it) but we were actually the ones doing the rescuing this time, by ridding the galaxy of the scourge of Evil Emperor Zurg!  And with top, maxed-out scores (999,999) aboard Buzz Lightyear’s Space Ranger Spin, no less. 🙂  Which qualified us for these awesomely cheesy certificates of merit declaring us GALACTIC HEROES!!!

It was fate then that we should swagger off the ride, high off of our own awesomeness (look at my face in the photo on the left, below – that is a Galactic Heroine who is feeling herself) and run straight into Buzz himself, who “signed” our certificates with a mighty judo chop to a special stamp.  Then he saluted our cunning and bravery, which no duh!  I dare say he was unbelievably impressed – we’re the King and Queen of Buzz Lightyear’s Space Ranger Spin, after all! 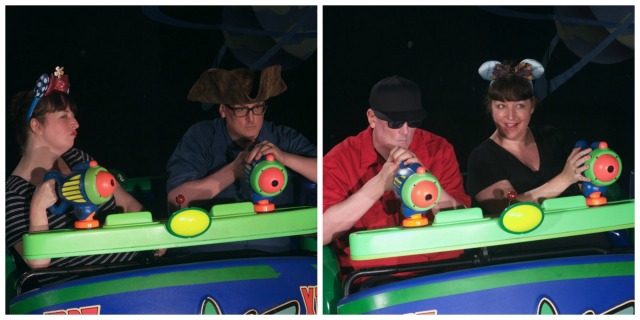