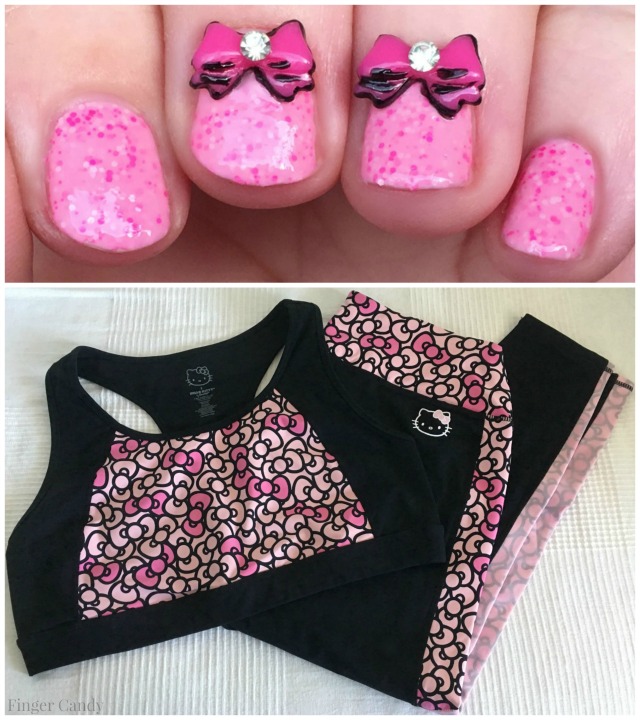 A friend recently commented, quite sweetly, that she was inspired by the determination with which I’ve thrown myself into my weight loss and exercise goals (this on the heels of my admission that I had pre-gamed my Thanksgiving dinner by taking a big, long swim the morning-of.  And actually, the really nutso part of that story, which I did not share with my friend because it made me sound (rightfully) bonkers, was that the pool heater had been out for repairs for about a week at that point, and so the temperature of the water was *maybe* 30 degrees?  Above zero, that is.  By the time I got out an hour later, I had lost most of the feeling in my left foot.  Now, tell me, is that determination or just insanity?) 😉

Anyhow, her sentiment was so lovely and made me feel like a million bucks – moi, determined, inspiring?  Why, thank you!  But also in the back of my head I was sarcastically thinking, “Bull-SHIT!” because those are both adjectives not typically used to describe yours truly.  I am the person you come to when you want to discuss the costuming of cats or Tim Burton’s use of mid-century suburban architecture or exactly how much Nickelback sucks (lots!)  But determined, inspiring?  Surely only if we’re talking determined to sit on my butt for as long as possible, potentially inspiring YOU to get off yours.

But as you know, my life has undergone a bit of a sea change in the last year – gone are the days of epic sittin’-around, as well as chips-for-11-pm-dinner and butter as a garnish.  Those bad habits have been replaced with daily exercise and mostly sensible nutrition, and for it I’ve been rewarded, as of this post, with a 70-pound weight loss, as well as a whole host of other fantastic, no-BS health bonuses (as in they actually happen if you put in the effort) such as increased energy, brighter, clearer skin, and a general (and much-needed) improvement in mood and attitude.  And no humblebragging (just outright bragging!) but I suppose those really are things to find inspiring, because yes, they took a tremendous amount of determination to achieve.

But it’s been hard.  It’s been really, really hard.  So far I haven’t harped too much on the drawbacks of sensible nutrition and increased exercise (the former being boring and the latter being both boring AND painful) because to date, I’ve been enjoying the positives far more than the negatives.  But my weight loss efforts have plateaued recently, despite my better attempts to switch things up and course correct, and I’m finding treading water – sometimes literally, provided the pool is warm enough – to be a frustrating chore.  I know one day the scale will budge; until then, I’m choosing to concentrate on the positive tangibles – that I’m nearly down another dress size, that I don’t get immediately winded climbing any more than five steps at a time, that I might actually be developing something approaching defined biceps?  The mind, it boggles!  I can also now once again do the splits (right leg forward only, but I was always crap on my left) and lay flat on the floor with my legs out to either side in a forward split.  I’ve recently even begun adding a bit of cool-down ballet barre work to my routine – nothing works the old thighs like a mess of plies, tendus and arabesques.  Tap is also fantastic cardio, although your neighbours WILL look at you as though you’re bonkers if they walk into the gym to find you really, ahem, Puttin’ On the Ritz.

But no matter where the scale is steadfastly hovering, all of the above is made easier when I look cute and feel great – somewhat non-natural states when you’re getting all red-faced and sweaty on an elliptical machine at seven in the morning, true, but nice clothes do make a difference.  A massive difference when you realize you’re now swimming in one of your favourite pairs of leggings, and a slightly smaller – though no less important – difference when you catch a glimpse of your toned legs in your new camo workout pants and vacuously, yet proudly, think to yourself, “Damn, dat ass!”  And sometimes – oftentimes – that’s enough of a boost to put some steam in your treadmill steps for many, many more workouts and self-doubts to come.  Clothes make the person and all that. 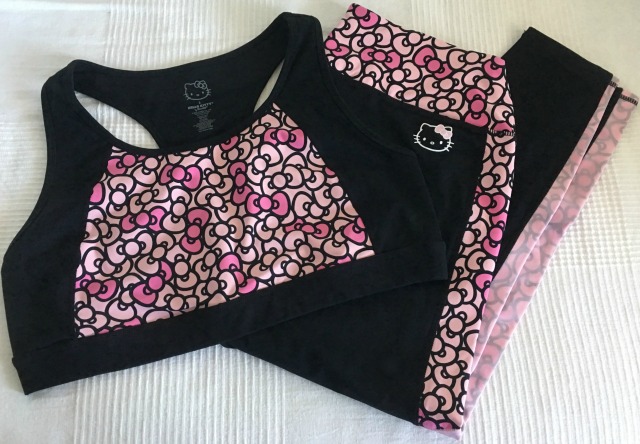 Although what does it say about a person when she willingly garbs her 40-year-old bod in licensed Hello Kitty wear?  That she sees herself getting stylishly svelte in Sanrio-sanctioned spandex?  Based on that last sentence, it might say she has a problem with alliteration, but otherwise, I see no wrong here.  Whatever tickles your fancy, and if your fancy is telling you to work out whilst covered in baby pink bows, who are you to deny it?  I clearly didn’t deny MY fancy, which is how I wound up with this stupendously cute Hello Kitty workout set from Torrid.  I buy all my workout clothes from Torrid – they’re a plus size retailer (an offshoot of Hot Topic, actually, hence all the goth-type branded merch and stacks of Manic Panic.)  I’ve had a ton of stylish success with Torrid’s gear – everything fits to standard measurements, the pieces are all well constructed and feature moisture-wicking materials and reinforced seams, and as a nice little bonus, everything is available in dozens of cool styles and patterns (strappy camo, racerback galaxy print, cut-out neons, as well as tons of not-so-basic black.)  It is workout wear manna for the chubby girl set, and as stated, it has made ALL the difference.  Because if I’ve got to walk in place for half an hour with nothing more to do than listen to Weird Al and stare at my own legs in the mirror as they shush back and forth, I might as well be looking at something adorable. 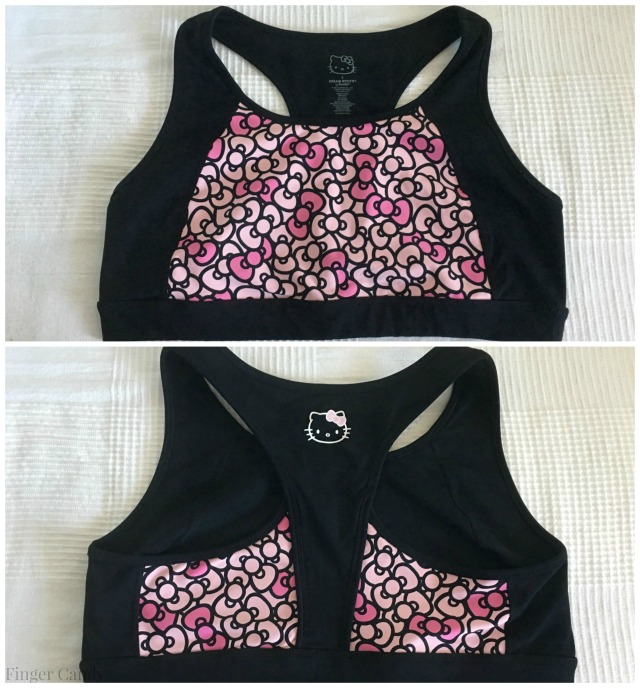 And since I also spend quite a bit of time on the treadmill with my hands up around my phone as I delete what seems like endless reams of photos (dangerous little bit of multi-tasking there, deleting photos whilst nearly breaking out into a run) it also helps if my fhalanges are looking their finest.  For these very Kitty-esque nails, I topped Whimsical Ideas by Pam’s Tutu Sweet with two basic plastic bow charms that I outlined in black polish for a starkly framed, comic book-type of look. 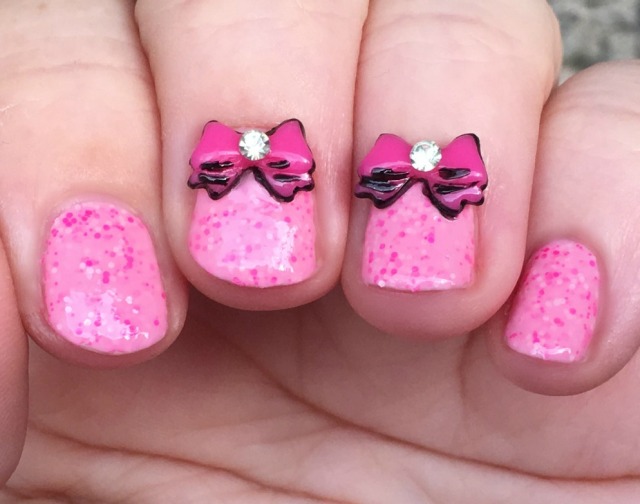 Now back to the gym, this time lookin’ Hello fine. 😉