It’s apparently round-the-clock cocktail hour here at Finger Candy, between yesterday’s fruity strawberry daiquiri nails and today’s bracingly brown Manhattan mani.  My grandmother’s drink was a Manhattan – a double Manhattan, actually (once again, Grandma, get down with your bad self!)  Me?  Well, after a young adulthood steeped in wine coolers and across-the-bridge brew, I don’t actually drink very much any more.  Alcohol just doesn’t seem to agree with my old lady constitution (never did – a graph depicting my response to alcohol is pretty much a straight up and down line; I’ve been known to go from “WOOOOOOO, LET’S GO TO THE BAR!!!” to sprawled out and unconscious in about five minutes flat.)

But there’s something quite alluring about a Manhattan, with a perfect little cherry gleaming out of its clear, brown depths.  To get that perfect Manhattan colour, I used a favourite – unfortunately also out-of-production – polish from Nfu Oh, the quite unimaginatively named JS39.  I have used this polish in SO many foodie manicures – it makes the perfect lacquered stand-in for caramel sauce, pumpkin spice anything and coffee.  Also nylons, but that’s not quite applicable in this situation.  Anyhow, drink up – plenty more where this came from (although maybe not; that beautiful bottle is distressingly low, and I’ve no idea where to find another.)  Boo to that, but yay to this mani – with its little martini glass and pair of cherries, it’s quite charm-ing. 🙂 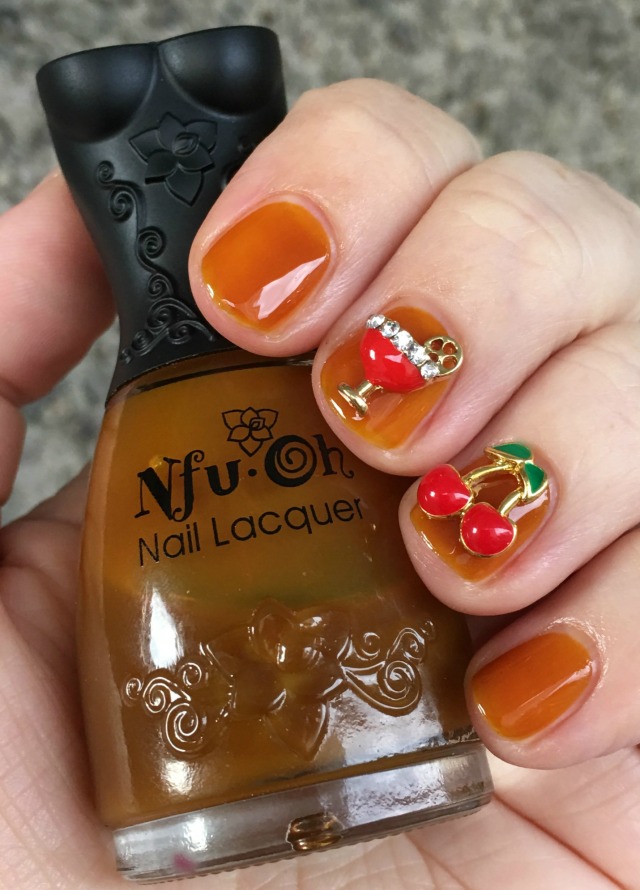 Continuing with this week’s unintentional theme of autumnal nail delights, here’s a super seasonal manicure that reminds me of the cut-down, Canada goose-filled corn fields I pass every day whilst out and about living my life (and if you’re wondering what kind of godforsaken, bird-plagued borough I live in – the other day it was turkeys, today it’s Canada geese – eastern Ontario!) Those fields are filled with the dried up, broken-off remnants of this summer’s bounty and, of course, about 200 plump geese gorging themselves silly for their flights down south (seems counter-intuitive to me, having a great big meal before a long flight, but clearly they know something I don’t!)

The hay or dried out, fieldy bits (actual technical term) in these nails comes courtesy of China Glaze’s Rest in Pieces, a predominantly copper-hued glitter topper from last year’s Halloween collection. I never really warmed up to this polish – something about the bar glitter (messy!) and the fact that it presents well over virtually nothing. Except for this manicure, where I of course think it looks AWESOME! Really, why did I not jelly sandwich this one sooner, especially when I’ve got Nfu Oh’s rich, butterscotch-hued jelly, JS39, on standby? The clear, lush simplicity of the jelly polish showcases Rest in Pieces beautifully, while tamping down some of the harsh holographic edges that tend to make it look just a tad “too much.” Very nice.

I’m a theme park nerd and Simpsons fan more or less in equal measure, and I’ve always taken great delight in the episodes where the Simpsons clan go to an amusement park, lampooning the genuinely magical, but ultimately financially-driven, nature of the Disneys and Universals of our world. I think the episode where the Simpsons fight off a roving band of murderous, off-program animatronics at Itchy & Scratchy Land might be my favourite theme park-inspired episode, but I also love – as do so many; it’s a classic for a reason – the 13th episode of season 4 in which Marge’s sister Selma takes the Simpsons kids to Duff Gardens, a Magic Kingdom-esque amusement park run by the Duff Beer Corporation. There’s all the usual Disney-type tropes at work here – endless parades, beleaguered costumed characters and “It’s a Duff World,” an “It’s a Small World” parody whose toxic waters bear hallucinogenic properties – although they also bring Sea World into the mix with the introduction of the Beerquarium, a suds-filled aquatic habitat filled with, apparently, “The World’s Happiest Fish!” Except they really don’t look so happy, listlessly circling the tank belching, groaning and trying not to vomit.

Anyhow, when day 14 of the Oh Mon Dieu Nail Art Challenge called for the theme of fish, I decided to do a Simpsons-inspired manicure featuring the drunken fish of Duff Garden’s Beerquarium (although later in the episode a character references something called a Fermentarium, which has to be the same thing, right? I move to change the name to Fermentarium on the grounds that it’s much funnier.)

I did these nails using the very-appropriate-in-these-circumstances pond manicure technique, this time encasing the inebriated fish in multiple layers of an amber-hued jelly polish, Nfu Oh’s JS39, instead of Duff Beer. Not really sure which one might be less toxic.

Pancake breakfast for dinner, anyone?

Whimsical Ideas by Pam’s Just Add Milk always adds the perfect chippy touch to food-themed manicures, and Nfu Oh’s J339, a caramel-hued jelly I once described as butterscotch pudding for your nails, makes THE most perfect maple syrup for this stack of chocolatey breakfast sweets.

I wonder which is less toxic, actual cola or this manicure.

The inspiration for this jelly sandwich manicure came from an indie polish I used to covet that both looked like and was named after Cherry Cola. I say “used to” because Cherry Cola’s maker, Happy Hands Nail Polish, no longer seems to be in active business.

But I have a caramel-coloured jelly polish, Nfu Oh’s JS39, and a cherry-and-vanilla-hued glitter polish, KB Shimmer’s Candy Cane Crush, and when the two are combined in a syrupy and fizzy-looking jelly sandwich mani, it makes for a pretty convincing dupe. I especially like the way the little white bits in the glitter polish look like tiny bubbles rising to the surface of the drink.

My first attempt at a pond manicure, wherein you layer opaque designs (those cookie-esque shapes) between layers of jelly polish (in this case, Nfu Oh JS39, a glossy caramel colour that looks like butterscotch sauce for your nails.)