Here’s a great example of a polish that’s more than the sum of its apparent parts thanks to a super cute name and a lovingly faithful recreation of a beloved movie character, in polished form! This is I Myself Am Strange and Unusual, a Beetlejuice-inspired lacquer from Dollish Polish’s recently released Cult Movie Classics Collection. The name comes from a declaration that gloomy goth girl Lydia Deetz loftily makes that she can see ghosts because, like the ghosts themselves, she is herself strange and unusual. The name is cute, and the polish itself is nice enough, although probably not something I’d buy were it not inspired by and named after one of my favourite movies. But the perfect touch on this polished sundae – the thing that takes it from a maybe-buy to a must-buy, particularly for Beetlejuice fans – is its flawless attention to detail in capturing Lydia’s general essence. The colour, for one, is perfect, a greyed-out periwinkle the colour of violently stormy skies shot through with glass shard glitter as brittle as Lydia herself. This polish also features a healthy scattering of plum and blue micro glitter, which in certain lights makes it look like the exact colour of Lydia’s bedroom walls. They’re little, but important, touches, particularly for fangirl types like me! 🙂 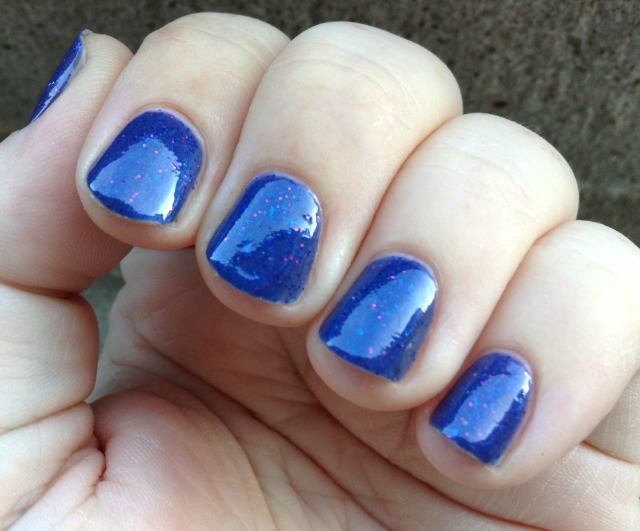 For all my talk of my favourite movies (and boy, do I talk of them often), I don’t actually have one single favourite sitting atop the heap like a glorious, shining beacon of cinematic nostalgia. In fact, if you were to ask me to pick which of The Lost Boys, Beetlejuice, The Nightmare Before Christmas, Bowfinger, The Goonies, Detroit Rock City or The Birdcage was my one and only love…we’d be here for a really long time, and at the end of it all I still wouldn’t have an answer for you. You can’t make me choose!

But I suppose if I were well and truly forced to make a decision under threat, say, of never being able to watch any of my favourites ever again, I’d pick Beetlejuice – it is the chosen one! I have spoken in the past (perhaps at length) about how very much I love that movie, and all of the associated licensed properties that went along with it – the off-the-wall cartoon, the infuriatingly difficult NES video game, the neon green lunch box I had in the 10th grade that some meanie threw into the middle of the street, where it (and my heart) shattered into about a million tiny pieces (I’m generally not one to hold grudges – if I don’t like you, I just don’t think about you; simple as that – but 20 years later I still remember that guy and occasionally even wish him ill. I hope he morphed into a completely different person after high school, because Version 1.0 was a rotten jerk.)

All that to say hey look, guys, Beetlejuice nail polish! Or at least nail polish named after a character in Beetlejuice, Winter River, Connecticut’s annual pick for Little Miss Gloom, Lydia Deetz. This is Lydia by Glam Polish, a new-to-me polish manufacturer with its finger on the pulse of what makes this polish maven tick, at the very least! Based on some of the swatches I had seen, I thought Lydia was a purple foil-type polish, but it’s actually a very, very fine mix of mega micro glitter in varying shades of purple, plum and royal blue. In lower lighting the mix of colours creates a cool duochrome effect, flashing back and forth between purple and an almost gold-tinged plum. Formula-wise, Lydia’s a beaut, and I can only hope all of Glam Polish’s offerings are of the same quality – a not-too-thick two-coater that applies smoothly and wears beautifully with no fuss, no muss. Just lovely.