Well, one week on.  But as with all things in my life lately, it took me a while to find my nail art supplies amidst the mess of these (never-ending) renovations, and it’s not like *I* was the one attending last Sunday’s Costume Institute Gala at the Met – Anna Wintour would never have the scrubby likes of me around, let alone in my current state of perpetual dishevelment, both physical (our new bathtub is lovely; now could we just get a faucet and reconnect the water?) and mental (I keep losing important things – my keys, my wallet – and yesterday I very carefully wrapped up a rasher of bacon and laid it in the cupboard beside the crackers; I just found it this morning.)  Had I managed to score an invite, it most likely would not have been my best showing.

But do you know who looked abso-friggin-lutely fantastic?  Cara Delevingne.  “The cosmic hula-hooping dirt scientist from Suicide Squad?” no one is asking.  Well, yes, her, and okay, I’m in agreement that her turn as Dr. June Moon (seriously) is maybe not one of her better roles as an actress.  But in wearing one of her many other hats as a model, the girl slays – she’s got the strong features, lithe figure and cocky attitude necessary to pull off major runway looks like the one she sported last week at the Met Gala.

Years ago I was super into celebrity gossip; spent too much time contemplating the hows and whys and wheres of shoeless Britney in the night.  I kicked my “need” for up-to-the-minute details on the whatabouts of my not-so-favourite stars a long time ago, but I still love looking at morning-after photos of the fashions sported by celebrities on the major red carpets.  And of all the red carpets, the Met Gala’s themed event has got to be the majorest (the carpet was actually pink this year), with nearly all the attendees adhering to the year’s chosen theme.

2019’s theme was “Camp: Notes on Fashion.”  And not camp as in “Here’s a nylon tent and four pegs; good luck keeping the bears out of your food” but as in Susan Sontag’s definition (pulled from the 1964 essay that inspired this year’s theme) of a “love of the unnatural: of artifice and exaggeration.”  So look for a lot of colour, bonkers headpieces and unexpected adornments.

I literally gasped out loud when I saw Cara Delevingne’s Pride-inspired Dior confection.  She looked like one of those striped, rainbow-coloured lollipops you get at the fair.  With a bunch of bananas and eyeballs stapled to her head.  And girl was working it – she even had a pimp cane. 🙂 Oh, but that dress!  Ultra mini, super broad shouldered, horizontal stripes in a rainbow’s worth of unusual colours…had I the money, the bod and any place to wear it (simply pulling on a pair of pants these days feels like a pretty major accomplishment) it would be mine.  I’ve never been so in love with an outfit in my entire life.  I’d even wear the banana-eyeball fascinator.

I’m also not sure I’ve ever been so in love with a manicure as I am with this one, either the striped base version or the excessively, artificially adorned one (no eyeball or banana nail charms, but I found some suitably weird ones in my collection all the same.) 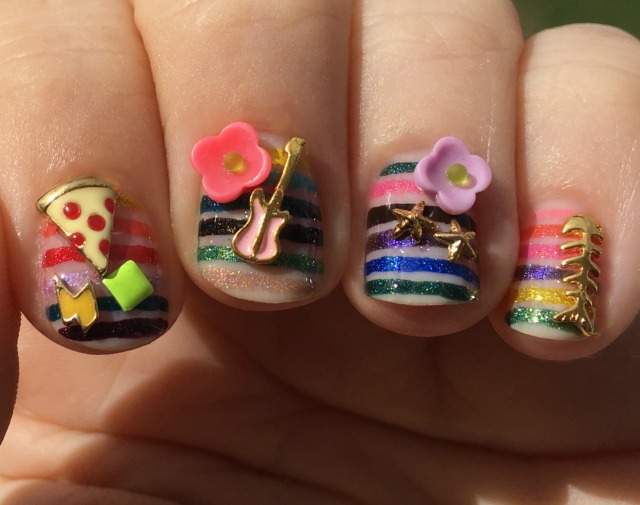 In following the exact colour pattern of the stripes on the dress, I used virtually every single Enchanted holo I own; I’m particularly fond of the very retro assortment of greens and blues on my middle finger.  And I’m totally blowing my own horn here, but those stripes are free-handed – striping tape is great in some applications, but it tends to pull and bleed when you’re trying to do such fine detail work.  Better to take my chances with a fairly steady hand.

Really, this might be one of my favourite manicures EVER, and I’ve been doing this a while – nearly six years by my last count.  It’s just the most fun, whimsical thing I think I’ve ever done, and I adore it!

So a very nice way to kick off the week, proud of a thing I did.  And to a week that make you proud, friends – I hope we all have wonderful ones. 🙂