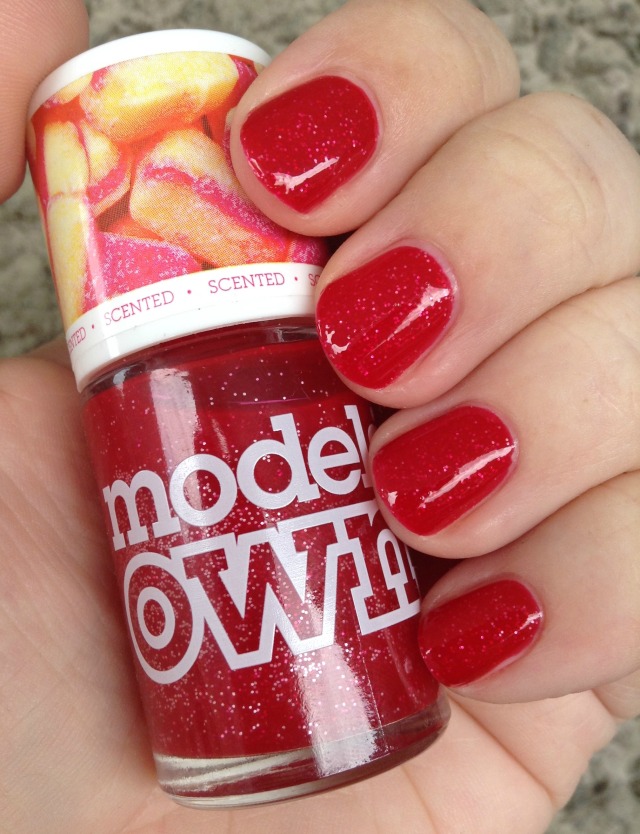 Actually, no, that’s a lie; I totally think you’re ready for this jelly! This is Models Own Rhubarb and Custard, a sweetly-scented, strawberry daiquiri-hued jelly sprinkled with ultra tiny white matte glitter. Released last year as part of their candy-scented Sweet Shop Collection, Rhubarb and Custard, a lush, super saturated candy apple red, applies with the typical ease of a jelly, drying down to an ever so slightly textured finish on account of the matte glitter. A coat of Seche Vite tidies that up in a flash, though, lending this polish all sorts of interesting visual interest and depth, with the glitter doing that fun thing where it looks as though it’s suspended in the polish itself. 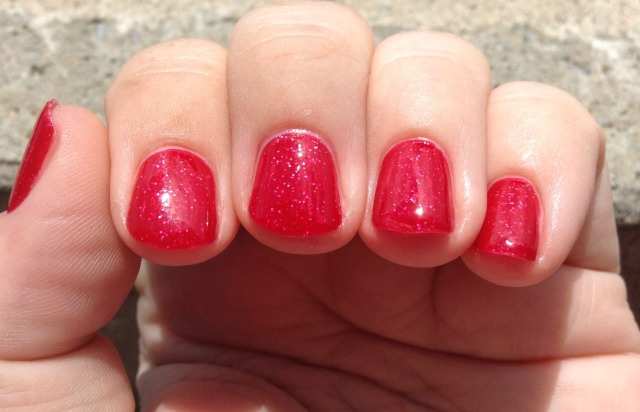 And what of the scent? Very nice, actually, and fairly unobtrusive. Scented polishes can often be nauseatingly cloying, but Rhubarb and Custard, while smelling neither particularly rhubarby or custardy, is pretty in an unidentifiably sweet way, and not the least bit affected by the addition of a topcoat. You can find Models Own polishes, including this candy-coated beauty, at Nail Polish Canada, Harlow & Co. and Llarowe. 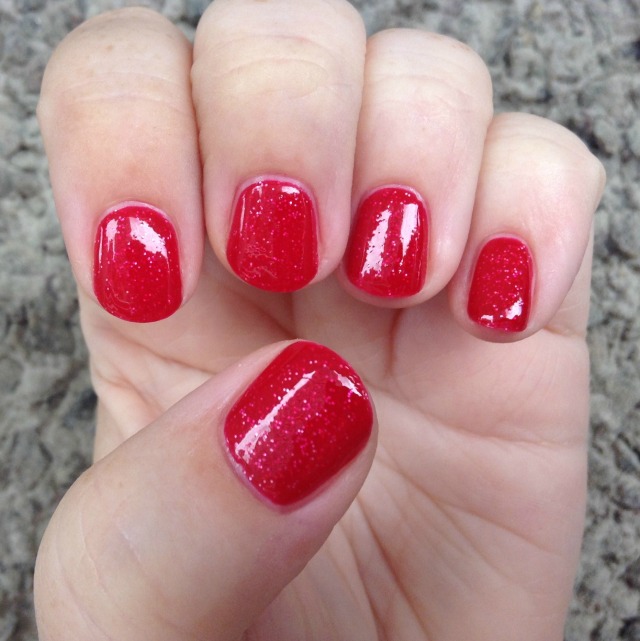 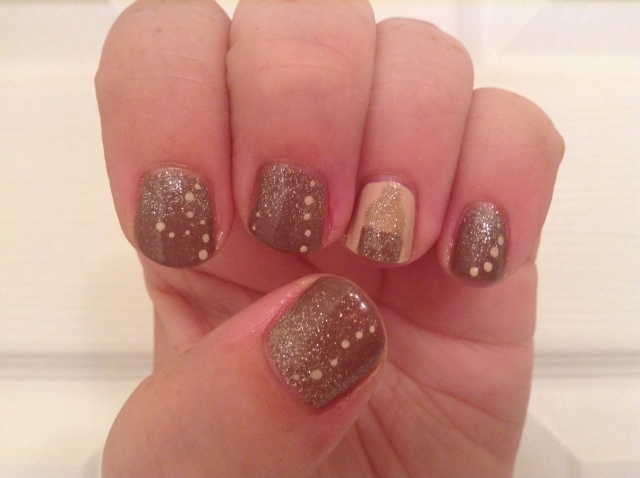 This textured gradient mani is meant to look like those little sugar-dusted gummy cola candies my friends and I used to buy from the 7-11 for a penny a piece (heavens, that was a very “old timer” kind of statement – what are these mysterious pennies and 7-11s the daffy old lady is nattering about?) and is indeed inspired by the brown base polish I used here, Models Own cola-scented Fizzy Cola. It’s a cute look, albeit a tad washed out, but regrettably not worth the hassle of working with Fizzy Cola.

I’ve commented before that I’m not a huge fan of crapping all over a polish or a polish maker just for the sake of being disagreeable – to each polish their own and all that jazz – but when my experience with a product is overwhelmingly negative, I feel like I ought to say something, if only to give people a heads-up as to what they may be running into. Call it a PSA – a Polish Service Announcement.

And what you’re running into here is maybe the poorest polish I’ve ever worked with. I’ve been lucky in that I’ve purchased very few dud polishes – just a handful – but this one really stands out, and not in a good way. Which is a shame, as my experience with the Models Own brand has been a good one (love their fruit-scented, pastel collection.) As you can see, the colour’s quite nice, a cool, mid-toned brown shot through with gold and silver shimmer. The scent’s pretty great, too, a smell I’d describe as being caught somewhere between cola and chocolate. But the consistency and ease of application? Those things that absolutely make or break a polish, no matter its pretty colour or scent? Terrible. Thick and almost lumpy (a giant, disgusting blob oozed off the brush and back into the bottle with an audible plop, putting me off all creamy foodstuffs for the next few days), it dried in visible ridges the second it hit my nails and left thin wisps of polish along the tips of my talons where the brush left the edge of my nails. It’s also completely unsuitable for nail art detail work, as it dries far too quickly for you to do anything other than marvel at its glue-like qualities.

As always, I like to point out that batch lots can find one dud bottle amongst 1,000 winners – there’s always that chance that you got the crap bottle – but over on Nail Polish Canada’s site there’s a review of Fizzy Cola that’s pretty much in lockstep with mine. I can’t say what the issue is with this particular polish, but it certainly doesn’t seem to be racking up the fans. Save your money on this one. And here’s to the second polish in the candy-scented Models Own collection I bought being nothing like this one! 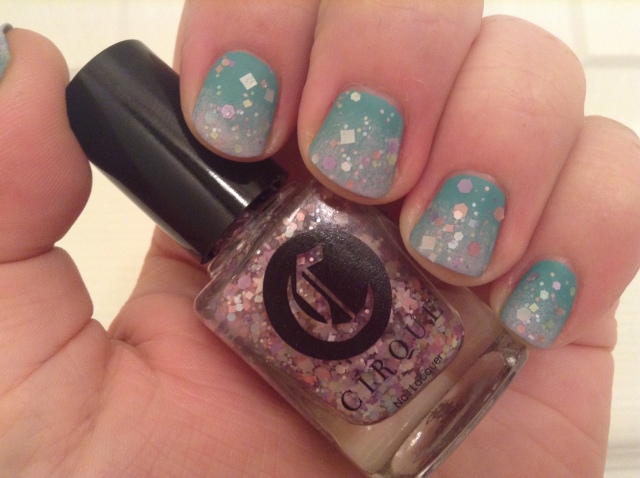 A bit of back story. I bought the glitter polish I used in this matte gradient manicure, Cirque’s Lullaby, after lusting after it for the better part of a year. I never purchased it because I questioned how much utility I’d get out of such a pale polish. And as it turns out, my fears were indeed nearly entirely founded, because swatching Lullaby has been something of a satin pastel nightmare.

First I tried it over white. So pretty and delicate in real life, uncaptureable on camera. The problem with standard white as a base (actually, not so standard; for this mani I used one coat of Lullaby over a blue-on-white gradient using a couple of Model’s Own scented polishes, although you’d never know it) is the polish’s little white stars get lost against the background. And with its satin finish glitter, Lullaby tends to almost sink into the base polish, the soft glitter colours blending into one another. 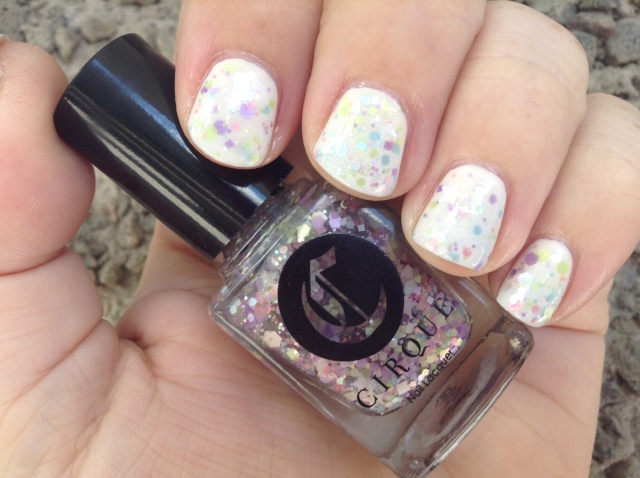 Then I tried it over holographic pink. That was also a big ol’ negative, as the pink blindingly outshone the glitter, and Lullaby once again seemingly merged with its background polish. 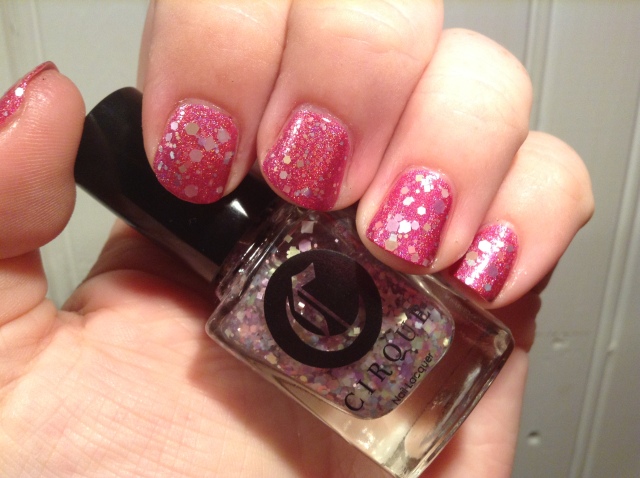 Then, thinking that this was absolutely the last time I was going to be swatching this polish, I tried it over a pale, ethereal lilac. That effort was so positively ugly and useless, I didn’t even bother taking a photo. Finally, as a last ditch effort, I thought that maybe the problem was the polishes I was choosing were too pale and the top coat too shiny, and so I tried one coat of Lullaby over a watery blue-on-violet gradient, topping the whole thing off with a light-dulling top coat, Essie’s Matte About You. The result was my best effort involving Lullaby, with a just dark and smooth enough background to really let the glitter shine. A bit of a laboured effort for one polish that unfortunately didn’t quite live up to the myth I had created for it in my head, as pretty as it looks bubbling along on my nails. 😦 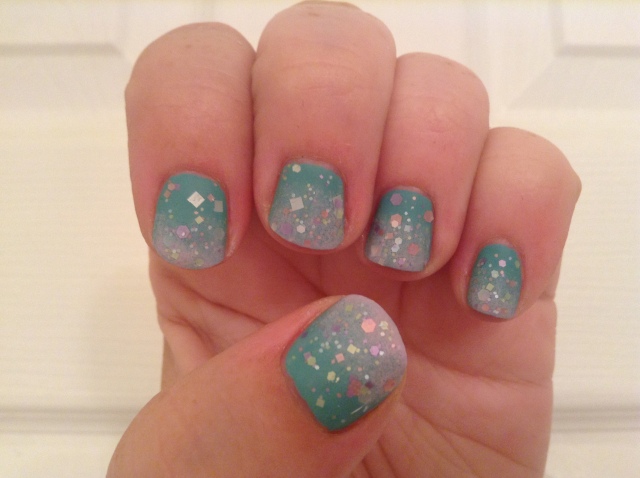 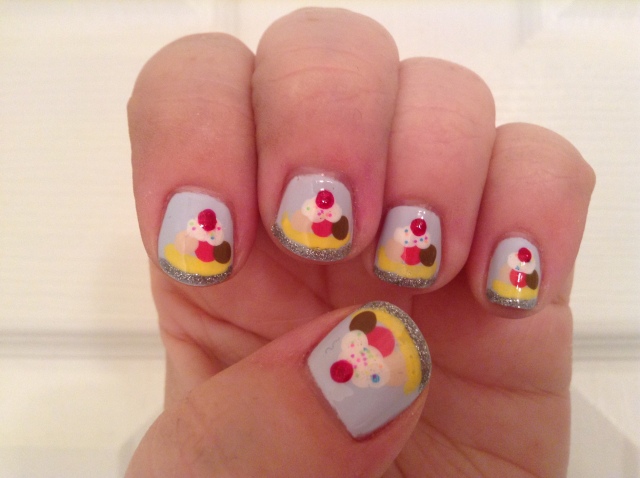 B-A-N-A-N-A-S! The fact that I have a category of nail art entirely devoted to food and candy-themed nails suggests that I’ve done more than my fair share of sweets ‘n stuff-type manicures, but I think these wee little sprinkle-topped banana split sundaes (and one of my father’s preferred desserts) are my favourites. It’s just an added bonus that as the base colour I used Models Own scented polish in Blueberry Muffin, which doesn’t smell a bit like blueberries, but gives these nails a fun and fruity scent just the same.

Now if only I hadn’t top coated an errant cat fur onto my thumb, we’d be all set! Huh, a cat fur in my mani – must be a day ending in Y. You hear me, pussycat and polish lovers; I know you hear me. So many manis ruined by one floating fur. 😦