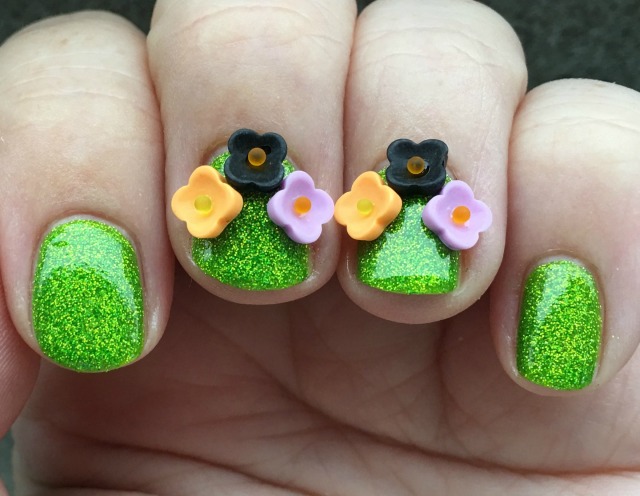 Hmm, maybe should have added a few snowflakes to this manicure, because guess what just started?!  A legit snowstorm.  And no, I’m not posting any pictures, because snow before Halloween is the worst.

But these nails are kind of the best, a retread of a similar design I did some months ago, only this time in a vibrant, seasonal palette, perfect for the happy haunting season.  You know, assuming you can find the Jack-o-Lantern under all the drifts. 😦

A baby pink base, tons of super vibrant glitter (Candy Lacquer’s Licorice Allsorts) and two hot pink, rhinestone-studded, hard plastic bows combine to create a whole lot of look for day 17’s theme of glitter in the 31 Day Nail Art Challenge.  Nail art embellishments are never anything but a pain in the arse to maintain over the long term, but oh my, are these sorts of manicures ever a delight in the short term (so long as the short term doesn’t involve anything strenuous or water-based or – lord help your hands – strenuous AND water-based.  So no crazy bow manicures for Michael Phelps.  But you know Ryan Lochte would be down.) 😉

Looks like the gang’s all here – a little edamame to nibble on before getting down to the main business of sake, a California roll, Ikura (here in 3D form using the marigold-hued micro beads I purchased from Daily Charme) and maguro! 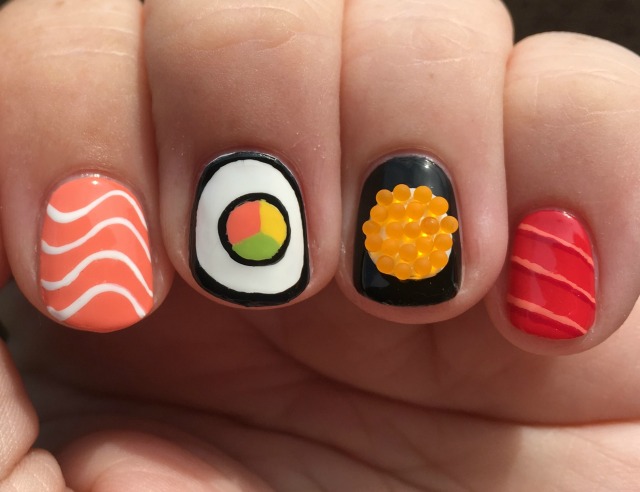 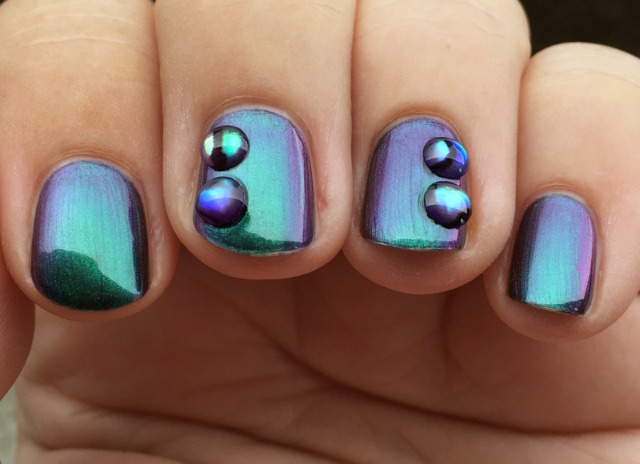 Three years ago when I began really immersing myself in the world of nail art, I swore to myself (and others!) that I wasn’t going to become one of those nail artists who piles a bunch of lumpy embellishments all over her nails.  Flash forward a few years and I’ve adorned my nails with various 3D adornments two days in a row now. At least it’s good to know I’m consistent in my inconsistencies.

But it’s hard not to waffle a bit (or a lot – also, oooh, waffles) when you’re dealing with nail art supplies as pretty as these tiny purple gemstone studs I recently purchased from Daily Charme.  Here I paired four of the mother of pearl-type studs with a similarly beautiful (and colour-changing) lacquer, Polish Me Silly’s green-to-turquoise-to-purple multi-chrome, Obsession.  Quite the gem. 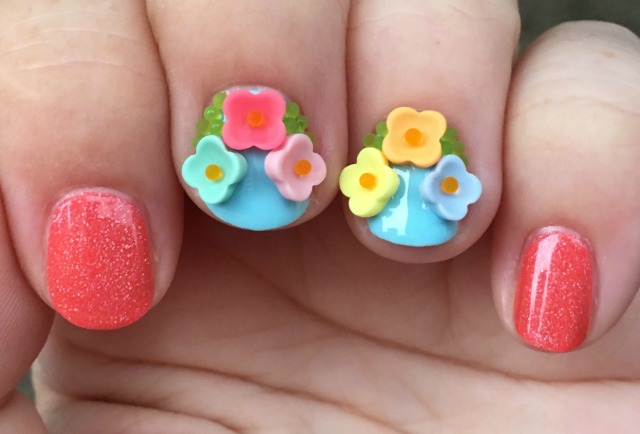 With apologies for my recent absence (busy busy with the necessities of life, and maybe a bit of hiding out from the horror show that IS life), here is an exceptionally impractical manicure I crafted together out of some cute items I recently purchased from Daily Charme, home of the fun, super obtrusive nail art embellishment.  “Crafting” always seems like the right word when it comes to my adventures in 3D nail adornment – there’s always a lot of glue and tweezers and frustrated screaming involved.

For these nails, I laid down a base of two super summery polishes, Picture Polish’s sparkly coral, Paris, and OPI’s pale turquoise, Sailing & Nail-ing, before topping my two middle fingers with a cluster of little clay flowers.  I then added a single marigold-hued bullion bead to the centre of each cupped flower (that’s just a very, very tiny gauge of bead) before filling in the spaces around the flowers with lime green beads.

And in case you’re wondering what the life span was on these particular nails, about seven minutes! 🙂 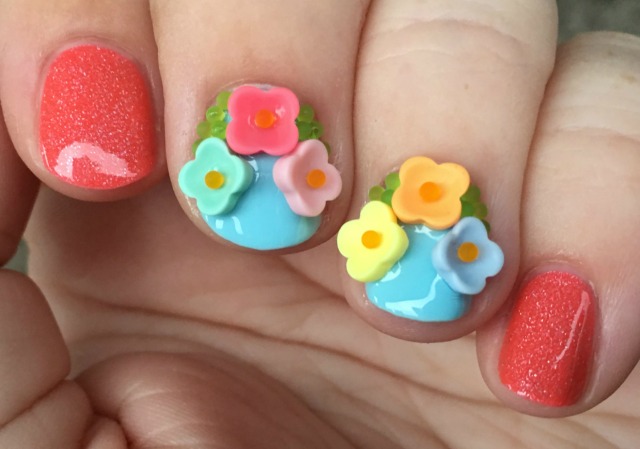 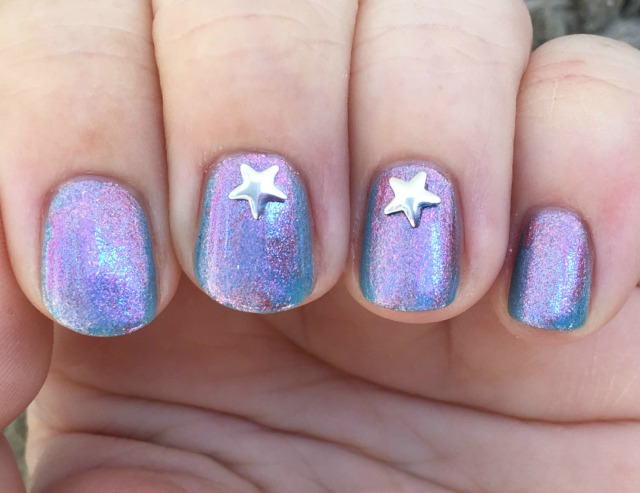 When I feel lacking in creative spark – sort of like I do now, caught somewhere between seasons and holidays – I like to haul out my polish collection and just start playing around. Sometimes my nail experiments – those moments when I just randomly throw any combination of polishes together – don’t yield the most positive of results.  I’ve sat back on more than a few occasions and gone, “Well, that’s just crap!” before blighting my efforts from the earth with acetone.

But every now and then I hit on something that’s easy, fun and super cute, and I’m all the better for having just mucked about first for a bit to see what sticks.  For this very opalescent-looking manicure, I used two shimmer-enhanced, foil-type polishes in Pantone’s Colors of the Year, pale periwinkle Serenity and baby pink Rose Quartz.  Laying down a base of the icy blue, I then topped it with random, nearly-dry brushstrokes in the frosty pink. And that’s pretty much it (save for the tiny silver star studs I added at the very end.) The resulting mani is super pretty, yet somehow still subtle, the purple shimmer in each frosty, foil-type polish blending beautifully for a simply gorgeous look.  Love. 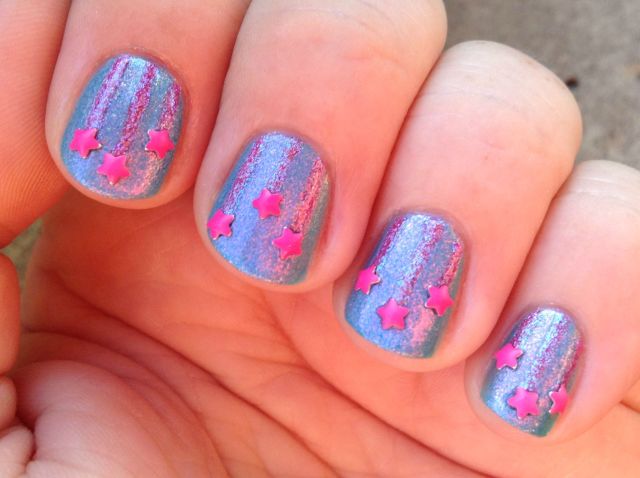 Just a little Stephen King nail art joke for you there. Oh man, Under the Dome…what a shit show you were! I am, of course, talking about the recently cancelled television show and not the novel, which is not only my favourite Stephen King book, but one of my favourite works of literature, period. Clocking in at a massive 1,072 pages, Under the Dome might seem like the kind of tome that’s more burden than pleasure, but thanks to a gigantic, engaging collection of Kingsian characters (the old timer! the town drunk! the precocious 12-year-old with off-the-charts extrasensory abilities and two soon-to-be-dead parents!), an absolutely vile, yet unbelievably compelling, bad guy whose misdeeds (too mild a word, that) made me throw the book across the room in disgust on more than one occasion (my walls may say differently, but that’s actually a good thing) and rapid fire pacing, it clips along. I tore through it in three otherwise totally unproductive days. It’s a marvel of writing and structure, and absolutely his best work to date.

But that TV show…oof. I never watched more than two episodes (checked out, in fact, during the cow/slice scene in the pilot, which looked like it cost about $12) but I still like to rage about what could have been. Which was an amazing, once-in-a-lifetime, summer television event, the kind of pop culture moment you never forget. But instead of sticking to the bones of the story, which depicts one hellish week of socio-political wrangling, environmental destruction and far right-induced chaos in a small town suddenly trapped under a mysterious, impenetrable dome, CBS doubled down on the novel’s dumber, less tangible aspects (ie. the supernatural element, which is practically besides the point in the book), pooping out a laughably bad and stupidly bland show that shares little in common with the source material, but for a title. It’s the World War Z of television.

And, you know, it really didn’t have to play out that way. To go back to my earlier point, just imagine what could have been! Despite its size, and a cast of characters that numbers in the hundreds, Under the Dome’s overarching (heh) story is a tight, crisp one – it would have required very little editing to adapt the novel for television. There was no need to deviate so violently from the source material. And to that end, it wasn’t necessary to strip that gigantic, engaging cast of characters of every bit of individuality they possessed, nor was it necessary to round off the ages of absolutely everyone in town to a more demographically acceptable 20 – 45 years old. And there are no words to accurately convey my disgust at the neutering of Big Jim, Under the Dome’s horrifying real world villain.

Such a disappointment all around, and born of pure greed on the part of CBS. Here’s how it should have played out, according to my highly unbiased, totally non-screed-like opinion: Under the Dome should have been an eight to 10-hour miniseries. The events of the book play out over eight days – one hour per day of dome time, with a couple of extra hours tacked on for the ending, which I will not spoil for you, even all these years later, but I assure you, is impressive in its totality. Then, when the show proved to be a huge success – and it would; of that I am certain – they could look into a series that deals with the events pre-dome, post-dome or intra-dome, just from a different character’s (or characters’) perspective. Instead we got four years of totally nonsensical, barely watchable shit. It still pisses me off (clearly!)

But maybe back to the nail art for a quick sec? These nails are in service of day 12’s theme of stripes in the 31 Day Nail Art Challenge. In Under the Dome, the book, as the air becomes less and less breathable (thanks to soot-producing fires, plain old respiration and maybe that secret meth operation out in the woods?), the young and elderly begin having seizures, falling on the ground and babbling nonsense about “pink stars falling in lines” and the burning Great Pumpkin. Turns out it’s not nonsense at all, but again, spoilers. 😉 The pink stars, of course, have a very different meaning to the television show – something about a mystical egg in the lake that hatches into a butterfly who becomes a woman who’s somebody’s sister or mother? Yeah, I know about as much as you do! Anyhow, these are my pink stars falling in lines, or little pink star charms falling in lines.

These nails are so much fun! Tell me again why don’t I matte all the manicures? Matte topcoats, like Essie’s Matte About You, the topcoat I used for these nails, dry down to a beautiful, chalkboard-like finish that lend even the most basic of manicures a little something special. For these Sunday night specials, I topped a baby pink creme polish with two coats of Polish Me Silly’s Freckles, a neon glitter topper stuffed with razor thin, rainbow-coloured hexes. Freckles is delicate enough that it always looks as though it’s embedded in the base polish, with Matte About You giving the whole works a delicate, eggshell-type softness. As the final finishing touch, I dropped a single pastel stud onto each one of my nails, nestling them against my cuticles. Mmmm, sprinkles!