Call this updated Night of the Living Dead-esque manicure the inevitable sequel to a design I always thought I could do a little bit better.  I’m sure George A. Romero thought likewise when he attempted Dawn of the Dead.  Ooh, sick zombie burn!

But real talk?  Wonkus hand position aside, I actually prefer the original design; it’s clearer than this muddled black-and-white cemetery, and the tiny details are more delicately rendered.  Here, take a peek! 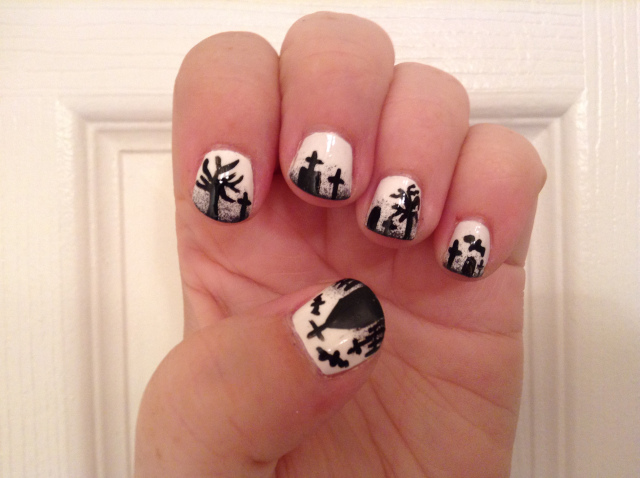 Not entirely unfortunate, right?  Like I said, slightly sideways hand position aside (it took a long, long time to nail down a position that both felt and looked good) I think this 2013 manicure is far superior to the one I did today.  What’s old is new again!  Or maybe I’m just regressing?  Hard to tend to my nail artabilities when I’m running off to Disney every 20 seconds (slight exaggeration, but only slight – we’re leaving for our anniversary trip in two days!  So 172,800 seconds.)  Anyhow, perhaps I’ll have to update the update of the original, just to put these black-and-white zombie things six feet under where they properly belong once and for all. 😉

A stark black and white graveyard scene reminiscent of the 1968 George A. Romero horror classic, Night of the Living Dead.

In an earlier version of these that I began and then removed four separate times, I drew in tiny little zombies besetting my graveyard. But my nail art style tends to be quite cartooney, and my wee little stick zombies were just too distressingly cute for this particular cemetery, so back in the box they went!