Getting way up close and personal with this flaked-out manicure that was little more than an excuse for me to muck about with a fun, colour-shifting polish and my neglected macro lenses.  And this flakie, Polish Me Silly’s multi-chromatic Party Hearty, is an excellent candidate for the job – it just looks so cool mega magnified, particularly the larger, slightly raggedy rainbow bits.  Love this fun, experimental look. 🙂 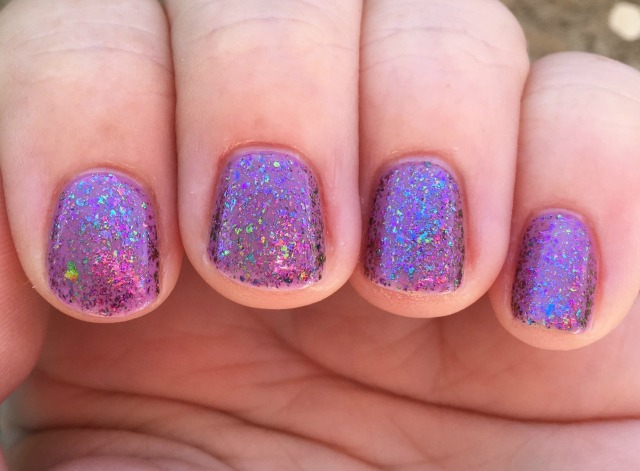 I love nail polish. I love buying nail polish. I probably love buying nail polish a bit too much. However, two years and 300 plus bottles of lacquer later, I’m growing tired of shelling out my money for a tiny bottle of glittery, toxic paint that I will use perhaps twice. I’m not talking here, of course, about the cremes and holos and glitters that I use every day in various types of nail art, more the niche polishes that have one very specific purpose and season in which to shine (I’m thinking here of the glitter I own that looks like a blended Christmas tree – it never looks like anything but a blended Christmas tree. Pretty, but useless outside of the holiday season.)

So when I recently became enamoured with a shimmery, nude flakie polish from Digital Nails called The Dude Abides, I decided to forgo the PayPal transaction and see if I could create my own version using polishes already in my collection. And you know what? I could. And so I did! The Dude Abides (named after The Big Lebowski, a movie I actually LOATHE) is a nude crelly shot through with chromatic rainbow flakies. The PolishAholic has a great swatch of it here.

To get a similar look, I sandwiched one layer of Polish Me Silly’s Party Hearty, a multichrome flakie topper, between two coats of KB Shimmer’s pale nude holo, In Bare Form. In Bare Form is actually quite opaque and covered up a bit more of the flakies than I liked, and so I brushed on one final, light coat of Party Hearty, which added beautiful shimmer and great overall depth. My DIY version of The Dude Abides is a bit glitzier than the original, on account of the extra layer of vibrant, colour-shifting flakies, but I think it’s a better-than-serviceable imposter. 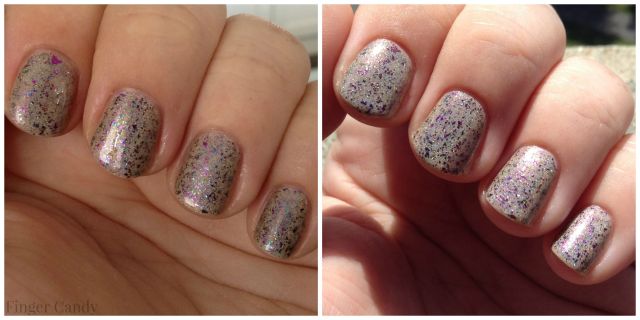 So the next time you’re eyeing up that beautiful, but impractical, polish, take a moment to root through your lacquer collection first to see how close you might be to cobbling together the exact same look from polishes you already own. Your bank account (and inevitable lack of storage; no one has enough storage) will thank you for it! 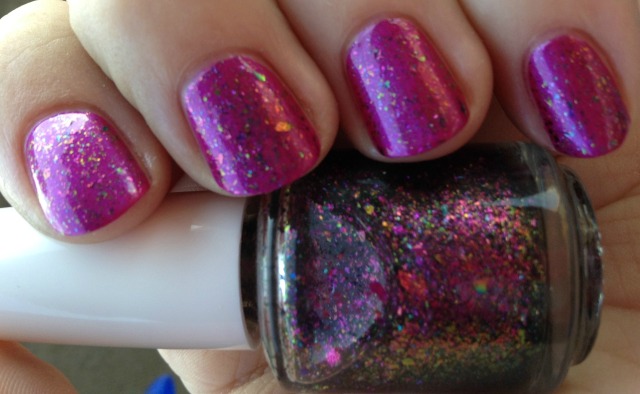 Or do; there’s lots to be excited about here if you’re a Polish Head, a magpie (really one and the same) or someone who just likes pretty, sparkly things! This is Polish Me Silly’s Party Hearty, a purple-to-blue-to-green-to-everything-else multi-chromatic flakie that really presents best over black or other very dark colours, although that certainly hasn’t stopped me from trying to make other polish combinations happen, like this one where I layered Party Hearty over Pure Ice’s glowy magenta Crazy Love. In photos this combo loses a bit of its lustre – tone on tone never shows particularly well in photographs – although it is so lovely actually on the nail – eye-catching and colourful without being seriously in-your-face.

But as much as I love these two polishes together, Party Hearty really does its best work over black. So how fortuitous is it that Mr. Finger Candy gifted me with a lovely new macro lens for Christmas (actually a set of different effects lenses) that I put to immediate good use in capturing all of Party Hearty’s gorgeous chromatic rainbows over black waaaaaaayyyyyy up close and personal? Very! So my macro game could use a bit of work (oh dear lord, there’s tiny cat furs everywhere!), but there’s no denying how very beautiful Party Hearty is generally, and also now in extreme close-up. 😉 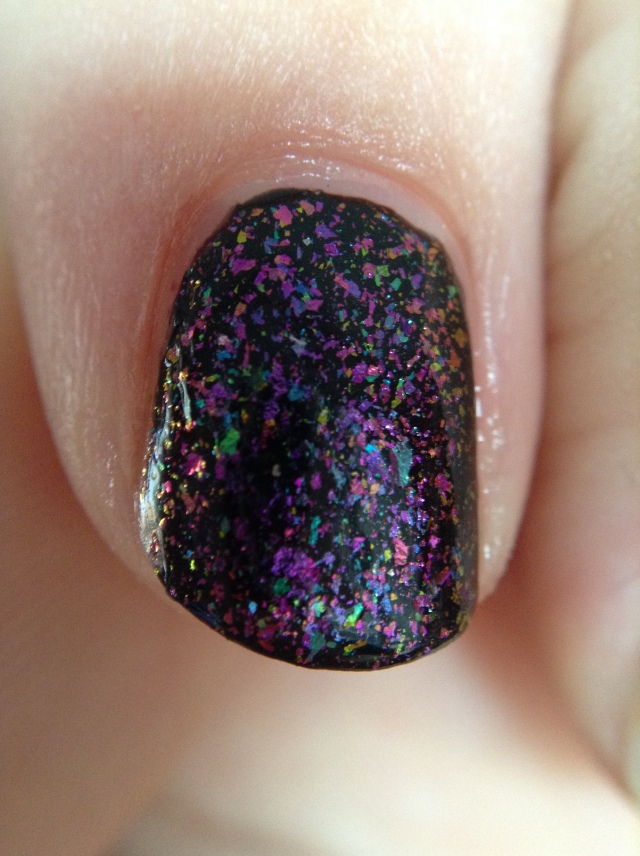 Yeah, I’ve been sitting on that groaner for a while in anticipation of receiving these new chrome flakie polishes from Polish Me Silly. Flakies are all the rage in the world of indie polishes at the moment, with multichrome-packed flakies being the coolest of a pretty bitchin’ bunch. These two beauties, Polish Me Silly’s Party Hearty and Stop Flaking on Me, are just two out of a whole collection of gorgeous chromatic topcoats that are beautiful and beautifully made.

First we have Party Hearty, a clear polish stuffed with tiny flakes of purple-to-blue-to-green-leaning chrome…glitter? Except it’s not quite glitter, is it? It’s more like tiny shards of colour-shifting chromatic nail polish in a clear base. Except it’s not quite shards either. This topper behaves exactly like a regular old creme polish – it goes on smooth, dries down totally smooth and shiny (these photos show both polishes without a topcoat) and removes in a flash, no struggle, no fuss, no binding your nails in aluminum foil-wrapped acetone baths. Here I’ve shown Party Hearty over Nails Inc.’s cobalt blue Baker Street. I love how the plummy undertones of the little flakies pull out the purple notes in Baker Street, giving it a grape soda sort of hue. 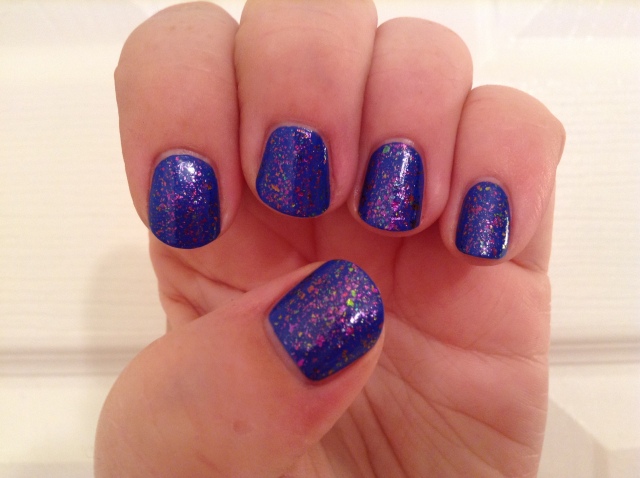 Here’s a nice outdoors shot of Party Hearty that shows off its textureless…ness. No pitting, no curving, no issues. 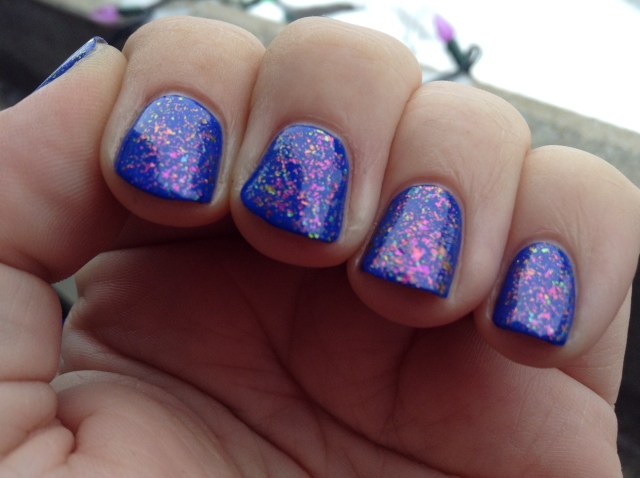 And here we have Stop Flaking on Me, a pink-to-green-to-gold-leaning chromatic flakie. A simple black creme background polish is always a wise and chic choice, but I think these polishes look best over darker polishes that pull out some of the complimentary colours in the flakes. Here I layered one coat of Stop Flaking on Me over OPI’s gold-tinged dark green, Live and Let Die. 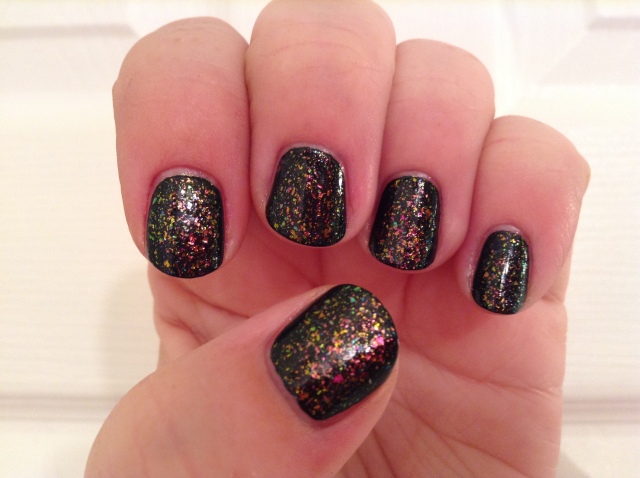 There are so many indies out there right now doing amazing things with ultra trendy flakies, but I think these colour-shifting chromatics from Polish Me Silly lead the pack – it’s hard to top a beautiful, of-the-moment look like this one, especially when it’s executed so beautifully. All-around winners. You can find Polish Me Silly’s products on their Etsy site here.