These nails, my entry towards day 27’s theme of wings in the Oh Mon Dieu Nail Art Challenge, are actually my second attempt at a Tinkerbell manicure. As (nearly) always, I’m not shy in displaying my earlier efforts, although maybe I won’t display them right *here* – if you’re curious to see what my original painted thinking was on the subject of Tinking, you can find those nails here.

And if you’re wondering why I painted Tinkerbell wings as opposed to, say, chicken wings on my nails for this challenge prompt, I’m sort of wondering that myself! But I can’t ever turn down an opportunity to add another entry to my ongoing Disney Girl Challenge, especially one where I always hoped for a second chance to do better. 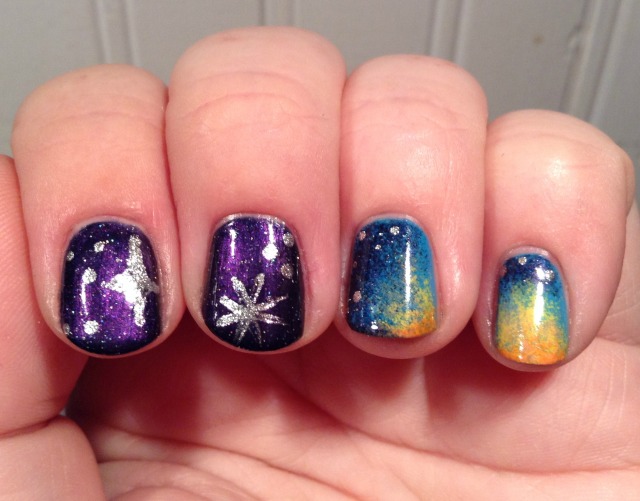 And straight on ’til (lacquered, gradient) morning.

Okay, I’ll be the first to admit these are only vaguely reminiscent of or inspired by Peter Pan’s fairy friend, Tinkerbell. They are tangentially Tink at best, an excuse to use some very ugly green polish (name withheld) and my second new Enchanted Polish polish, Across the Universe, at worst. I can’t help it! Fairies and pixies have never been my thing, and Tink is one of those creations that’s been around forever, but hasn’t seen mainstream success, if you will, until relatively recently. The number of little girls bombing around Disney parks in Tinkerbell’s iconic green dress (a much lovelier shade than depicted here) is testament to her popularity with the wee ones.

So yeah, basically just an excuse to try out Across the Universe, which is a gorgeous denim blue-grape purple holographic polish that I’m going to attempt to shoehorn into every manicure I do between now and Christmas, so in love with it am I. 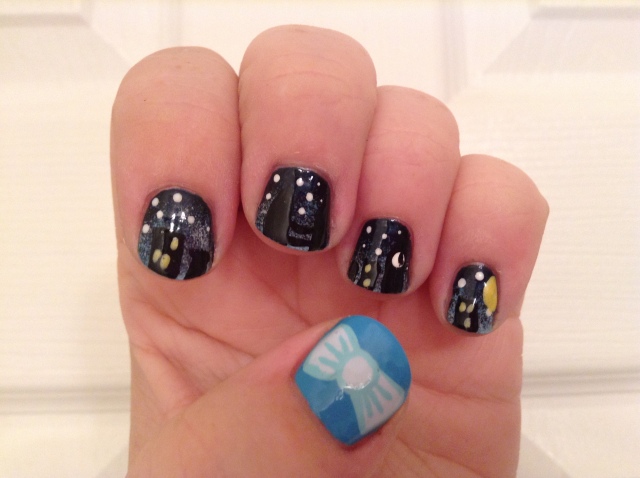 Wendy has beautiful jammies. All the better for entertaining middle-of-the-night guests and venturing out on spur of the moment jaunts across the rooftops of London with strange young men in green tights.

Actually, you know what, young lady? No late night flying pyjama party for you! You get your butt back inside this playroom right this instant, and you and I are going to have a talk about this young Pan man, because I’m not entirely sure he’s a good influence on you. Flying above the city, jetting off to Never Never Land in the middle of the night, hanging out with Lost Boys…you’re grounded! Case – and window! – closed!