What started out as a (never) simple water marble mani turned into an ode to one of my favourite home fragrances so gradually, I barely noticed when I started scrounging around my house for sand, sand, where’s the sand?!  And if there is any, could it be pink? Which is completely not a thing, but if I’m already inviting sand into my home, shouldn’t I be able to dictate its hue?  It IS totally reasonable to have a jar of pink sand just sitting around your house, right?  Then I realized I was carrying on a hypothetical conversation with DIRT. Decorative dirt, but still.  Sense and reason righted themselves shortly after. At least for a while.  I never did find the sand.

Anyhow, Pink Sands, a fresh, beachy floral from Yankee Candle, is an inexplicable favourite.  Yankee’s website informs me that Pink Sands is a blend of melon, berries, osmanthus (os-whatnow?), spicy vanilla, musk and woods, which sounds like absolutely nothing I should like.  And yet Pink Sands stands out as one of my very favourite scents, period – it’s a lovely little palette cleanser amid my usual fragrance menu of “things covered in icing.”  And in the world of custom vendor wax, Pink Sands acts as an unexpectedly versatile blender scent – I’ve had great success mixing it with juicy strawberries, crisp candy apples and salt water taffy.  I also think it would pair well with the usual assortment of beachy coconuts and salty aquatics (what say you, Candle Enthusiast, resident Yankee-blending authority?) 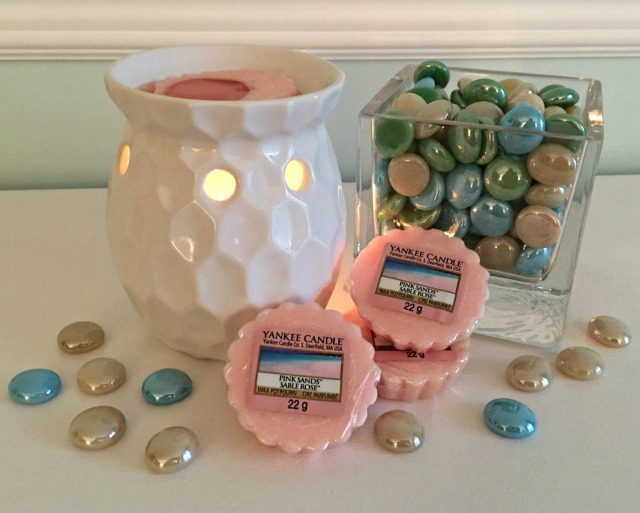 But as always, matching nails aussi, because that’s just how Finger Candy do.  Also kinda the whole point of this blog, as much fun as these little sideways leaps always are. Also also always, this water marble manicure was a total jerk.  They know no other way, pretty, swirly bastards.  And I know no other way other than having to re-do my index finger three times.  Ah, but you know what they say – consistency IS key! 😉 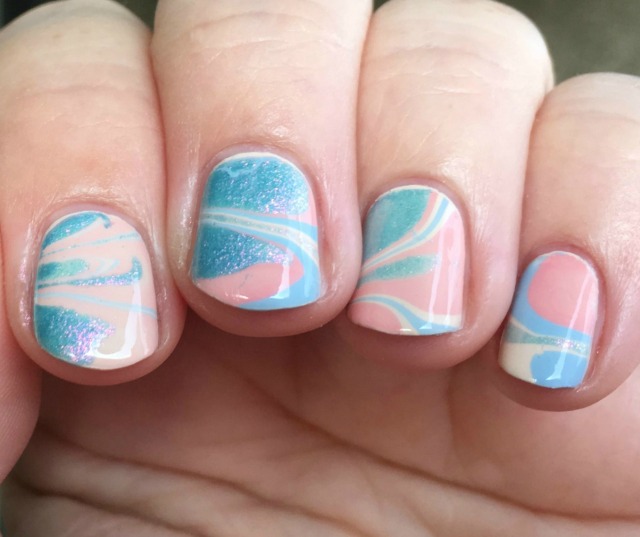