Have you ever tried to blame your bad behaviour on an evil twin?  Quite convenient if you’re actually a twin, slightly more difficult if you have a sibling, and next to impossible if you’re an only child, like I am.  Not that that ever stopped me – “Sandra!  Did you cut all of Barbie’s hair off and drop it behind the sofa?”  “Nope, you must be thinking of a different Sandra.  Or my evil twin.”  Good thing my parents had a great (and very indulgent) sense of humour about their smartass daughter.

Stephen King has a sort of literary evil twin in the form of Richard Bachman, the nom de plume he used to write such works as The Running Man, The Long Walk and The Regulators.  I think Bachman is the name King uses when he wishes to indulge in his more sadistic and puerile impulses – The Regulators in particular is a candy-coated slice of suburban torture porn.  But over-the-top violence and bombastic bloodshed is a young person’s dark game, and one that cannot be played indefinitely.  King himself seemed to recognize this when he mostly retired the Bachman name after being outed in the mid-80s (via death; “cancer of the pseudonym,” it was) and then again in the late ’90s when he allowed Rage, a short story he wrote in 1977 about a school shooting, to go out of print, amid fears that it might inspire similar incidents.  I also suspect, as happens to most of us as we get older, that King – yes, even Stephen King, the Master of Horror – simply aged out of that stage of his life that got off on violence and bloodshed.  And maybe Bachman had become a kind of literary crutch, a former friend-turned-unwelcome house guest.  It’s a theory I’m inclined to accept after reading The Dark Half, King’s 1989 novel about a Kingsian author who jettisons his popular pseudonym, with horrific results. 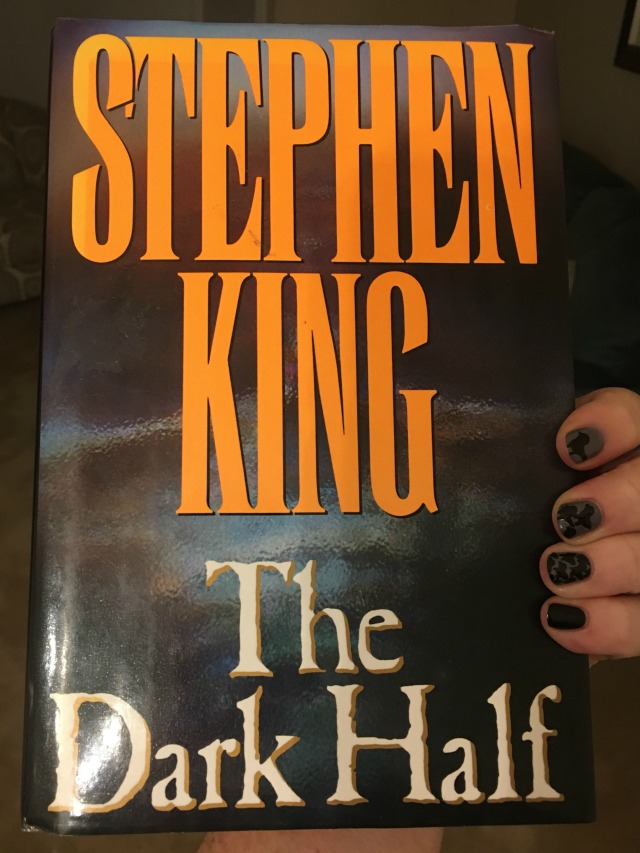 It’s been said a time or 20 that you should always write what you know, and indeed, The Dark Half is an amped-up, supernaturally-tinged version of real life events involving King and his pseudonym, Richard Bachman.  In the book, Maine novelist Thad Beaumont has grown tired of writing under the guise of his popular – but brutish and inelegant – pseudonym, George Stark.  When he began writing as Stark, he was an angry young man in the depths of both alcoholism and a major career depression, and literary bloodshed seemed like just the balm for his broken writer’s soul.  But after becoming a happy, contented father to twin babies and finally, blessedly, sorting his life out, he finds he no longer cares for Stark’s brand of outrageous carnage, and seeks a return to writing under the Beaumont name.

At the same time, an opportunistic young bookseller/law student/aspiring novelist lucks into the well-kept secret that George Stark is actually author Thad Beaumont.  Thinking that he’s landed on valuable information that Beaumont would undoubtedly pay to keep secret, he approaches the writer with well-mannered blackmail on his mind, oblivious to the fact that Stark is already halfway out the door.  A week or so later, Beaumont puts the final nail in Stark’s coffin AND the bookseller’s blackmail attempts when he outs himself in People Magazine, along with a multi-page photo spread detailing Stark’s funeral, complete with shots of a mournful Beaumont laying flowers at the grave of his homicidal nom de plume.  The bookseller is furious, and vengeful, but hasn’t time to indulge in either on account of the fact that he and absolutely everyone associated with Beaumont’s writing are then hunted down and brutally murdered.

To this point – and obviously absent the sadistic murders – this mirrors King’s own experience.  Stephen King’s substance abuse issues have been well documented, and he’s said himself that he really didn’t get his shit together until after his children were born.  He has also shown distaste for some of his/Bachman’s earliest works, particularly Rage, writing of it in 2007, “Now out of print, and a good thing.”  And he raised virtually no fuss when he was outed as Bachman in 1985 by a Washington bookstore clerk, and actually went so far as to sit down for an interview with the guy to confirm his findings.  It was during this period that King basically retconned Bachman into an early retirement via death, and absent a few subtle nods to the name – his wet work character on Sons of Anarchy was named Bachman – King’s evil literary twin has stayed mostly silent for 30-some years now.

But King’s fictional alter ego in The Dark Half doesn’t fare as well as King did under similar circumstances, especially not once the killing starts and it’s revealed that Thad Beaumont has a lot more in common with George Stark than he ever thought possible.  And because this is a Stephen King book and what you see is sometimes exactly what you get, I can’t reveal any more without revealing everything, and so here’s where I’ll stop.

I read The Dark Half in service of my friends’ 2019 reading challenge, but darned if I know what theme I was going for with this one!  I think at one point last year I just decided that if I wanted to read something, I was going to read it, and so that’s how we wound up at The Dark Half.  I enjoyed it, but as always with King, the ending just kind of fell off the table in a flock of sparrows.  Sparrows have a particular importance to Thad Beaumont and George Stark in The Dark Half – heaven help us all if they start flying again, and so I thought it best to confine them to my nails.  See, not so evil after all. 😉