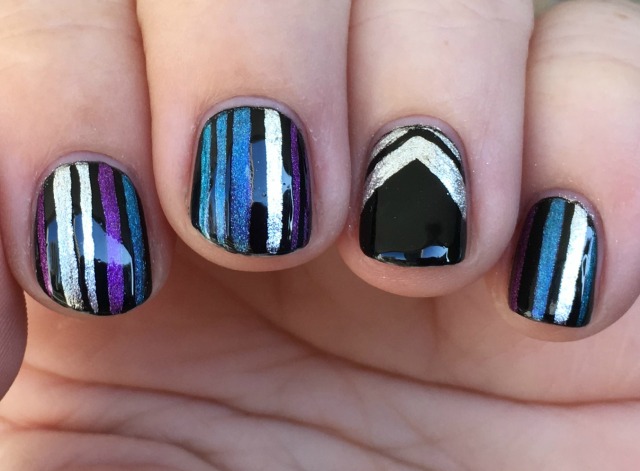 Day 25’s theme in the 31 Day Nail Art Challenge was fashion, and the outfit I chose as inspiration was a dress recently worn by singer Rita Ora to a taping of America’s Next Top Model (I thought that show ended a few years ago.  I…guess not?)  I saw the striped, diaphanous dress on Ora in this Go Fug Yourself article, and I was immediately smitten – it’s very 1970s, updated with a more modern colour palette in shades of shimmering black, silver, turquoise and purple.  Very groovy, baby.

Except I have no bloody clue who designed this dress.  Neither does Go Fug Yourself.  And the Internet seems just as oblivious, if my half hour of unsuccessful keyword searches are any indication.  I have no idea what gives; why all the mystery?  This is a beautiful dress, and whoever designed it should be celebrated!  So if you happen to know who’s responsible for this very pretty gown, please do let me know.  For now, though, I’ll have to be content with this inspired-by manicure.  I think I can manage that. 😉 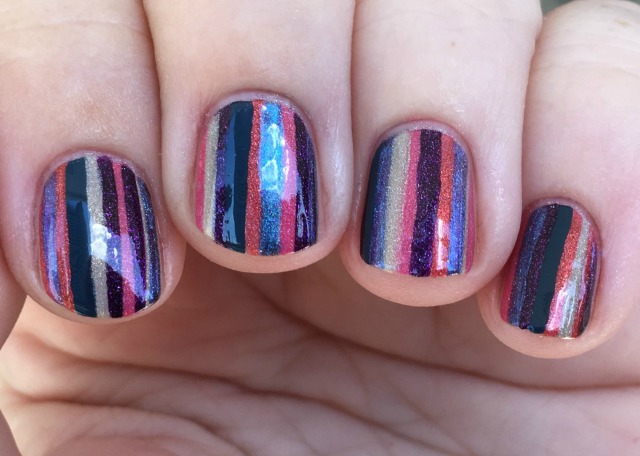 For last year’s theme of fashion in the 31 Day Nail Art Challenge I did a manicure inspired by the gorgeous Naeem Khan gown actress Ellie Kemper wore to the 2015 Emmy’s. Studded with intricate beading, the solid stripes and chevrons of the super slinky, very retro gown glimmered with sequins in shades of dusky blue, plummy purple, shimmery nude, rusty orange and bubblegum pink.  The dress itself was gorgeous and Ellie, of Unbreakable Kimmy Schmidt, looked like a stone cold fox (an adorable, super floofy fox, maybe; Ellie Kemper is like a human ray of sunshine and I have a hard time associating her with anything other than cute, cute, CUTE!)

But my favourite part of that particular outfit was, hands down, its terrifically unique colour combination. Really, stormy blue, dark purple, light pink, rusty orange and nude should not be colours that work beautifully in tandem, and yet here we are!  But I wasn’t hugely fond of the job I did on last year’s manicure – lining up all those chevrons, horizontals and verticals without the aid of striping tape was a pain, and the end result was kind of sloppy.

But with my free-handed striping game now so much better than it was this time last year, I thought I’d take another run at the Naeem Khan gown, this time in a series of bold vertical stripes for day 12’s theme of – yup, you guessed it – stripes.  Final verdict?  MUCH better – kind of like the striped pattern on an amazing pair of pjs from the 1970s – and still my vote for the coolest, most unique colour combination you’ll find in fashion or nail art! 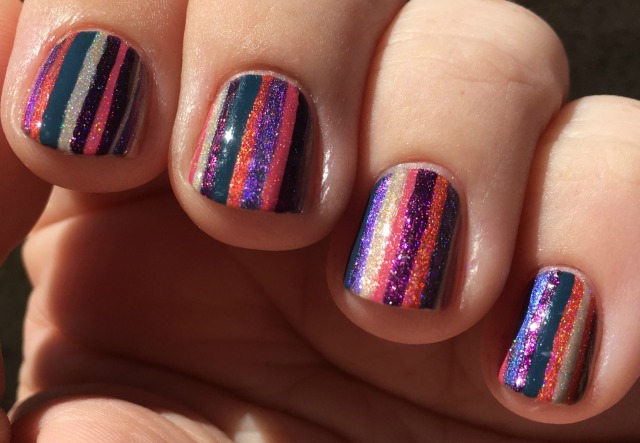 These were supposed to be violet nails for day six’s theme of violet in the 31 Day Nail Art Challenge (actually, they’re supposed to be this purple and green Waverly fabric (and wallpaper, and matching border, and frilly bolster pillow, and…) I was obsessed with as a kid, hence all the green in these supposedly purple nails) but they came out looking more like Johnny Jump-Ups.  Which is actually quite fitting, as Johnny Jump-Ups are an incredibly invasive – but adorable! – species and they tend to run allllll over anything they’re planted near, beside or in the approximate vicinity of.  Including apparently my nail art!

And yeah, I was totally the kid that lusted after co-ordinated floral textiles.  Laura Ashley was my jam when I was little!  Cabbage roses everywhere…

That’s one of my favourite lines from Angel, the spin-off television series to Buffy the Vampire Slayer, an incredulous observation made by Lindsay, the sometimes evil, sometimes one-handed lawyer, in assessing Team Angel’s chances in the finalest of the final battles (Spoiler: He’s totally right!  A dragon-slaying, demon-decapitating, double door-kicking circus, and my favourite episode of the entire show.)

It’s also the theme of this end-of-summer, carnival-themed manicure AND my thoughts on how the month of September is going to play out, as I’m participating in two different blogging challenges/round-ups, with lots of fun – but time-intensive and potentially insanity-making – activities at hand and ON my hands.

On the nail side of things, I’ll once again be taking part in the 31 Day Nail Art Challenge. This will be my third year participating in the challenge; it’s always a lot of fun seeing what the other participants come up with.  If you’re interested in joining in on the reindeer games, you can play along, too – the 31 Day Challenge is super informal, and you can push yourself as much or as little as you’d like.  The daily themes don’t change from year to year (day one is always the colour red, for instance) but the graphics certainly do! Here’s this year’s (pretty) guide to playing along at home: 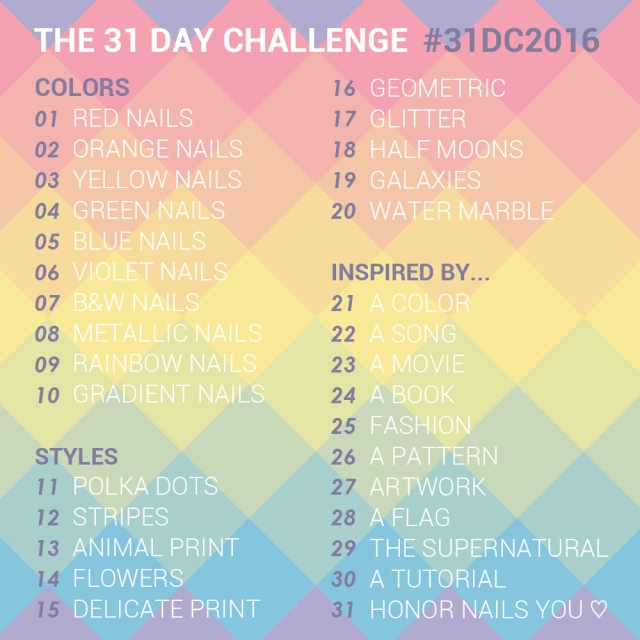 Then on the slightly more off-topic side of things, I’ll also be participating in a kind of Fall blogging round-up with a bunch of cool folks whose blogs range in topic from nails and beauty, to bath and beauty products and perfumes, to scented wax and cute craftables. That starts on Thursday the 1st – more details to come!

Every year I leave my beach and nautical-themed nails until the very end of the summer. That’s an odd little quirk, isn’t it?  I think that’s because beaches and I just aren’t sympatico – I somehow managed to get a sunburn – indoors! – the other day while wearing a freshly-applied coat of SPF 60, and I’m downright scared of pretty well everything lurking out beyond the surf.  But chubby little whales and anchors?  That I can do, even if it’s coming a bit late in the season. 🙂 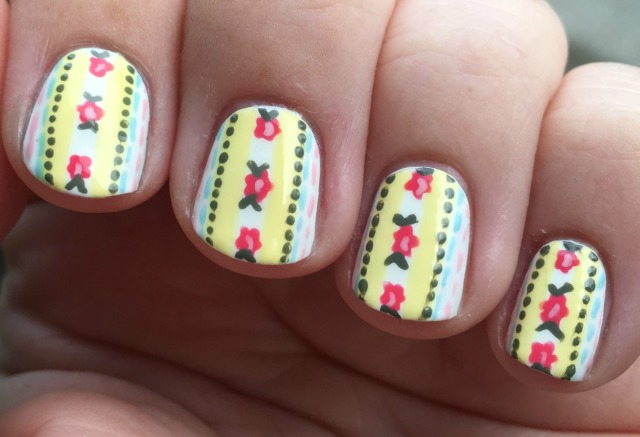 This is so the pattern of a be-bustle’d silk gown worn by someone in the court of Marie Antoinette (the ultimate ninnyhead, but dear lord, did she have exquisite taste in bespoke fabrics.)  It’s also possibly the fourth layer of wallpaper I uncovered in the upstairs hall of my family’s 100-year-old farmhouse when my mom and I stripped the walls when I was seven.  I like the bustle thing better. 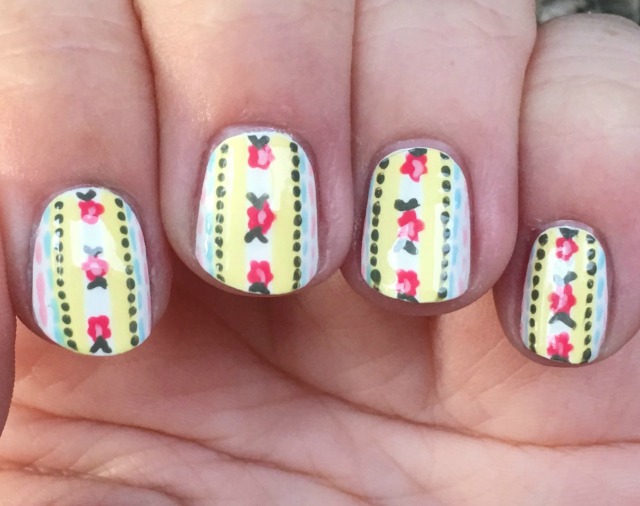 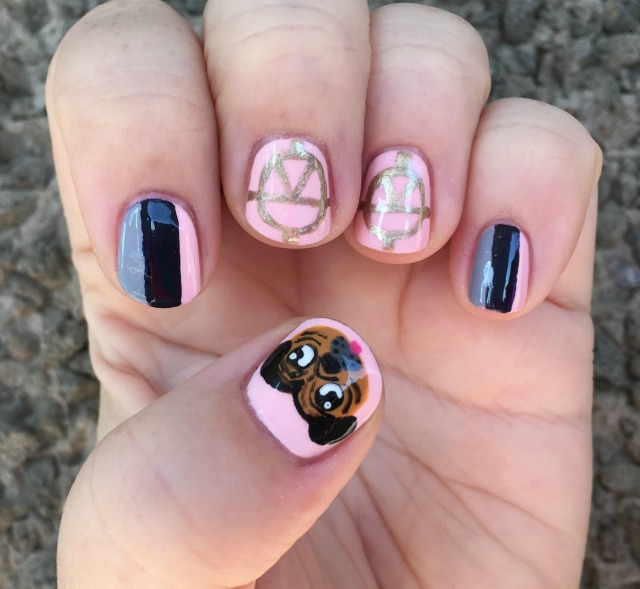 Closing out the week with a manicure inspired by my favourite movie of last year, Kingsman: The Secret Service.  Starring Colin Firth, Taron Egerton and Samuel L. Jackson, and directed by action dude Matthew Vaughn, Kingsman tells the story of Eggsy Unwin, a well-meaning but n’er do well thug-in-training who is recruited into Kingsman, an ultra top secret British spy agency.

Film preference is a terrifically personal thing, so I won’t be offended if you don’t immediately take my recommendation to watch this movie, WATCH IT NOW, like I have, over and over and over again, but allow me to leave some of these tasty breadcrumbs in my wake: An insanely charming Taron Egerton (I suspect there is no other variety.)  An insanely charming Taron Egerton in an impeccably tailored pinstripe suit (for all you types who share my affinity for a man in formal wear.)  Lots of men’s fashion advice.  Cute puppies! Uppercrust dickheads who get their comeuppance. A proper rags-to-riches tale. An elitist, profane Michael Caine (I also suspect there is no other variety.)  Colin Firth kicking ASS.  Yes, that Colin Firth, and I’m not even joking about the ass kicking – in the movie’s most memorable scene (SPOILER) his character is responsible for 79 deaths.  And you see every single one.  Kingsman doesn’t hold back on the violence, that is for sure.

I could go on for days.  Samuel L. Jackson making a very interesting acting choice.  A smart, strong and spunky female character who’s NOT there to be the love interest.  Mark Strong, who I find deliciously, nerdily handsome.  Tips on being a proper gentleman.  And freaking Sofia Boutella, a dancer by training who plays double amputee assassin Gazelle. This girl moves like no one I’ve ever seen, plus she gives excellent snark face.  I want to be her when I grow up, only slightly less homicidal.

All right, all right, I’ll stop now, but promise me you’ll at least check it out?  I don’t think you’ll be disappointed.

For these nails, I recreated the Kingsman medallion on my middle two fingers, and then the pink, grey and navy stripes of the medal’s ribbon on my index finger and pinkie.  And on my thumb I have only the second dog I’ve ever painted on my nails, Eggsy’s dopey pug, J.B. (Jack Bauer.)

Or “Say my name, say my name (say my name)” in the musical parlance of Destiny’s Child.  Because you just know they’re playing a horrible Muzak version of a Beyonce song in the Waiting Room of the Dead.  On repeat.  It’s actually just a playlist of one.

In case none of that made sense, here is a Beetlejuice-inspired manicure.  He wears a lot of black and white stripes and has green hair.  Anything that’s not striped is purple. And in order to get him to appear (and disappear) you have to say his name three times.  Why? Not a clue.  But I went with the lame Beyonce joke, because how could I not? 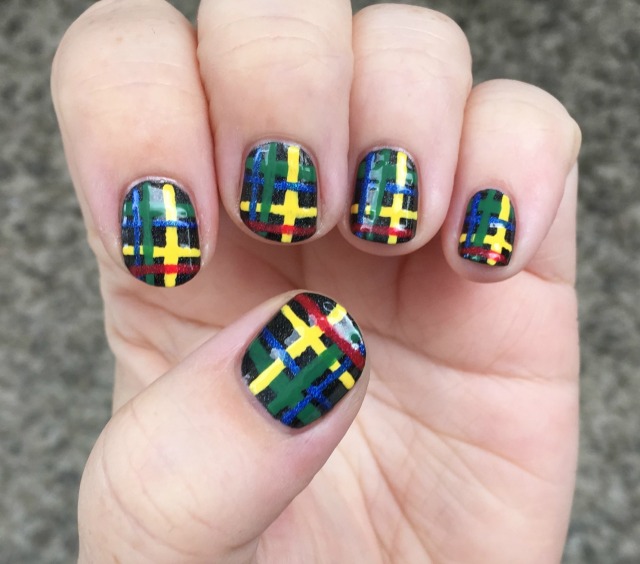 Always mad for plaid.  Or is it driven mad by plaid?  Because these nails were fussy!  I’m not quite sure why I always decide to freehand my more geometrically-inclined manicures – strikes me striping tape could be beneficial in such situations.  Then I think about all the times I’ve just wound up with little bits of striping tape stuck to my face and arms, and the road (less precisely) traveled suddenly seems like the better option!

Licorice Allsorts, that is!  So I’m not really sure how attractive these licorice-inspired nails are.  Cute though they may be, they’re not exactly cohesive, are they?  I do love the two textured polishes I used on my middle and pinkie fingers to mimic the look of those bumpy-looking pink and blue guys.  I, of course, can’t speak to the taste of licorice at all, because I hate the stuff, but from a design perspective, it’s pretty sweet! 😉

And on my thumb I’ve got two coats of the first indie polish I ever bought – and the perfect addition to this sweet manicure – Candy Lacquer’s Licorice Allsorts.