And here’s my pick for what’s sure to be Halloween 2016’s most popular costume for women (and some adventurous men), Harley Quinn!  Harley’s Suicide Squad costume (not to be confused with her traditional red, black and white jester’s suit) seems practically tailor made for today’s modern Halloween reveler – a slightly divisive figure from recent violent pop culture, lots of Hot Topic-type goth clown makeup and tiny little glittery underpants! I semi-joked back in the summer before the movie came out that somebody needed to figure out a way to harness the energy-producing power of teenage boners, because Margot Robbie’s performance could light the entire eastern seaboard for the next two to four years, an assessment I stand by after finally watching the flick – she was crazy hot (solid emphasis on the crazy.)  Girl’s got style, too – love her whole crash queen aesthetic.  Happy Halloween, Harley!

Know who was already ridiculously excited to see the Suicide Squad movie even before they released the soundtrack and she discovered twenty one pilots recorded the first single?  This person.  SO EXCITED!  The second trailer set to Bohemian Rhapsody?  A work of friggin’ beauty (also the thing that has me a touch worried; Black Dynamite, a 2009 spoof of the Blaxploitation movies of the 1970s, had an absolutely brilliant trailer that disappointingly failed to materialize into even five minutes of watchable film.)  Nothing but love, too, for the Heathens of twenty one pilots – if Josh and Tyler want to spend their off hours playing and pacing the dark, damp-soaked halls of Belle Reve prison for the comically insane, I’ll be right there alongside them.

I have so many thoughts on the subject of Suicide Squad and twenty one pilots, they’ll have to wait for another day, but I’ll say this right now: Before this flick comes out in two months’ time, someone needs to figure out how to harness the power of teenage boners as an energy source, because Margot Robbie’s cute, scampy, batshit bonkers Harley Quinn (painted here on my middle finger, alongside Jai Courtney’s Captain Boomerang) could power the entire eastern seaboard until Christmas.  Also, we are going to be AWASH in Harleys this coming Halloween, trust. 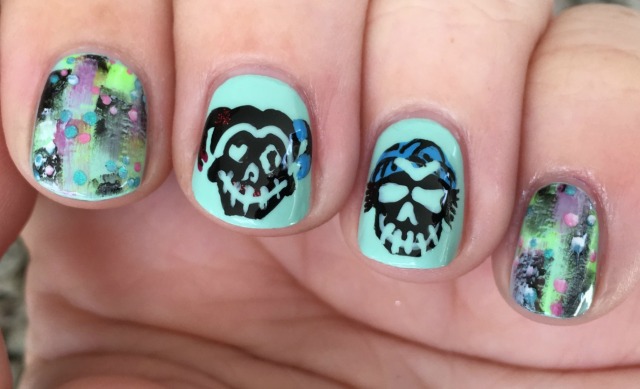