Heh, that’s a line from the second best character* on my favourite TV show, The Good Place.  Janet, played by D’Arcy Carden, is an “informational assistant” – basically an Alexa that can walk and talk and learn to throw shade.  Janet’s natural state is to walk around as a hot brunette (in inexplicably stodgy 1960s secretary wear) but when the goings get dicey (and are they never not dicey on The Good Place?) she can be “marbleized” – shrunk down into a easily hideable glass marble, simply by inserting the end of a paperclip in the tiny port behind her ear, and booping the end of her nose.  Wow, is The Good Place ever a weird show.

Anyhow, none of that has anything to do with these nails – was just bandying about some ideas for the title of this post and thought, “Huh, these look like marble.  Let’s Play Marbles?  Ugh, no, that’s crap.  Venus de Marble?  Seriously?  Gawd, go home, you’re drunk, that’s terrible.  *GASP!!!*  MARBLEIZE ME, MICHAEL!!!”  Yup, sometimes it really is just that scattered.  Also, I need to re-watch last season of The Good Place before the fourth – and final – season starts this fall.

Oh-kay, getting back to these nails!  They were insanely easy.  Like, embarrassingly easy.  And they only took about 20 minutes, including dry time.  Maybe I ought to create a tutorial?  But the hows for now?  I dipped a small, wide-edged detail brush into three polishes – here a dark brown, a lighter brown and a pale pink – and gently zigzagged it down my nails, already painted in a simple white creme, to create the veiny look of marble.  I repeated that process wherever there was space, trying to keep things loose and not too “done.”  Annnnnnnnd that was pretty much it.  Oh!  I also added just a tiny bit of glittery gold detailing, just to really highlight those little “fissures.”  Also, too many quotation marks in this post. 😉

But all this talk of shrimp, in service of this manicure I did after getting the “Arizona shrimp horny” line stuck in my head for days, made me realize that there are a lot of references to shrimp in my favourite movies and TV shows, and they all make me laugh uproariously.  Brooklyn 99’s Jake is dismayed when he discovers that cruise ship latrines empty into the ocean – “But that’s where my shrimp live!”  Buffy the Vampire Slayer’s Anya loves to talk up the all-shrimp (or no-shrimp) worlds that populate other dimensions.  The Birdcage’s Agador (Agador Spartacus?) protests when another character whisks away the seafood chowder he’s prepared, calling after them in a singsongy Puerto Rican accent, “But you forgot da tshrimps!”  Raising Hope’s Jimmy horrifies his family after returning home from his grocery store job reeking of disemboweled decapods (“Oh my god, what is that smell?!”  “The poop of 50,000 shrimps.”)  And let’s not forget about The Muppets’ Pepe the Prawn, who always seems to be on the unfortunate end of one of Miss Piggy’s schemes to make Kermit jealous (I laugh for days at the bit in the movie with Jason Segal and Amy Adams where Kermit walks in on Piggy and Pepe, in costume, practicing the lift from the end of Dirty Dancing.  He’s in a tiny little leather jacket, and desperately trying to fend off Piggy’s without-warning attempts at launching herself up and over him while “I’ve Had the Time of My Life” warbles in the background.  Mr. Finger Candy and I practically giggled ourselves into fits contemplating this wee shrimp version of Johnny Castle (we’ve dubbed him Prawny Castle, because how could we not?)

Turns out there’s a lot of references to shrimp in my favourite pop culture, and now here the little buggers are adorning my nails.  Think I might have as big a problem as Eleanor? 😉 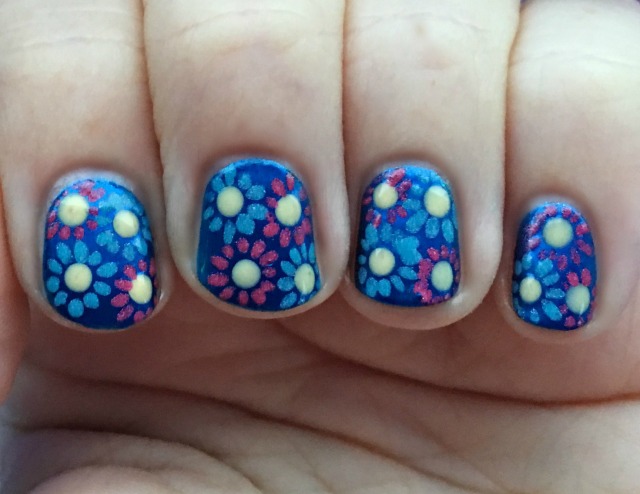 Holy motherforking shirtballs, that is a nice tie!  Or that’s what I would be saying if this manicure was an actual men’s bow tie and not just the print of a fictional one worn by Ted Danson’s character, Michael, on The Good Place.  I cemented my love of The Good Place with this manicure inspired by one of fashion plate Tahani’s dresses.  Tahani possesses a vast and enviable wardrobe of colourful floral gowns; I could do a manicure a day for weeks and still not reach the end of her flouncy and floral.

And as it turns out, Michael, architect of The Good Place, is something of a clotheshorse as well – he wears more pastel than an Easter egg, and always caps off his outfits with a colourful printed bow tie.  In a recent episode I watched Michael is wearing a smart floral tie bearing this fetching print; I liked it so much, I thought I’d turn it into a manicure.  Now, how’s that about a bench? 😉

Anybody else out there watching The Good Place?  Very funny (and sweet, and enlightening, and thought-provoking) half-hour sitcom starring Kristen Bell as Eleanor, a woman who, upon her completely ignoble death – flattened by a boner pill truck while bending down to retrieve an errant bottle of Lonely Gal Margarita Mix that had rolled out of her shopping cart – is sent to The Good Place, a heaven-ish type neighbourhood filled with nothing but pleasant people, pleasant surroundings and pleasant, pleasant pleasantness, instead of The Bad Place, where she most likely belongs.  Because Eleanor in life was kind of a dick, although her time in The Good Place really begins to bring her around.

Anyhow, tangent there, because this manicure has nothing to do with Eleanor, but rather Eleanor’s gorgeous glamazon of a next door neighbour, British socialite and It Girl Tahani Al-Jamil (played by actress Jameela Jamil, who I’ve never seen in anything before, and I simply don’t know how, because she’s just fantastic.)

Tahani actually begins The Good Place as Eleanor’s nemesis, a smothering and seemingly insincere neighbour who makes everybody’s business her business and name-drops more often than she blinks.  But Tahani’s also deeply insecure, and all the mentions in the world – that time she brokered a peace accord between her friend Kanye, her good friend Taylor and her best friend Beyonce, the year she spent as Baz Luhrmann’s muse, the $60 billion she raised for charity – can’t compensate for a lifetime of emotional cruelty from her cold socialite parents.  But lord, does Tahani try.  Tries Eleanor’s patience, for one, although it quickly becomes clear that Tahani is the real deal – a genuinely good (if occasionally insufferable) person who lives – and lived – to help others.  And hey, if she could snog Ryan Gosling at the Met Ball while she was doing that – twice – then so much the better!  It’s hard to stay mad at that, and by the end of the first season (second season coming soon!) Tahani and Eleanor consider themselves friends.

One of my favourite things about Tahani, though, is her gigantic, enviable wardrobe of flouncy and floral – girlfriend wears an honest to goodness Belle dress to a first-night gathering in The Good Place, hosted by her, of course, because ain’t no party like a Tahani Al-Jamil party!  She’s quite the fashion plate (although she laments that her modelling career was so regrettably short-lived; seems her bosom was simply too ample for couture, the poor dear.)

These nails depict one of the many, many, many floral dresses Tahani wears on her adventures about The Good Place, a dusky blue number she pairs with a floppy, wide-brimmed hat, afternoon gloves and a picnic basket (stuffed with morale-boosting maple butter scones she passes out to the other residents following a bit of neighbourhood strife.)

Anyhow, big recommendation on The Good Place.  It also stars Ted Danson, and another group of fabulous unknowns – William Jackson Harper, D’Arcy Carden and Manny Jacinto among them, and they’re all freaking hilarious (particularly D’Arcy Carden, who plays Janet, a Siri/Alexa-like informational assistant in The Good Place.)  Trust me, just watch it – it’s great. 🙂