Another watery water marble, this time a beautiful, holographic, colour-shifting one inspired by the R.E.M. song Nightswimming.  Extra pretty in the sun where of course holographic polishes do their very best work, but also so, so lovely in the shade – or at night – where you can really see the ever-changing bends and waves of the multi-chromatic polishes I also used.  Enjoy your swim. 🙂 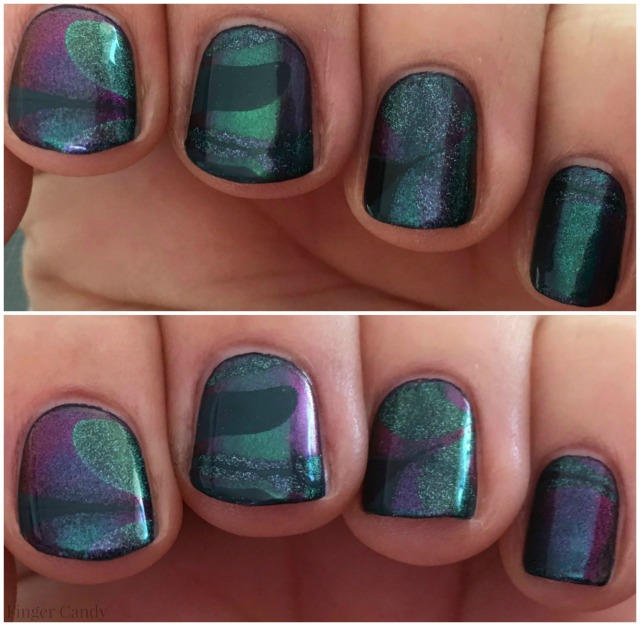 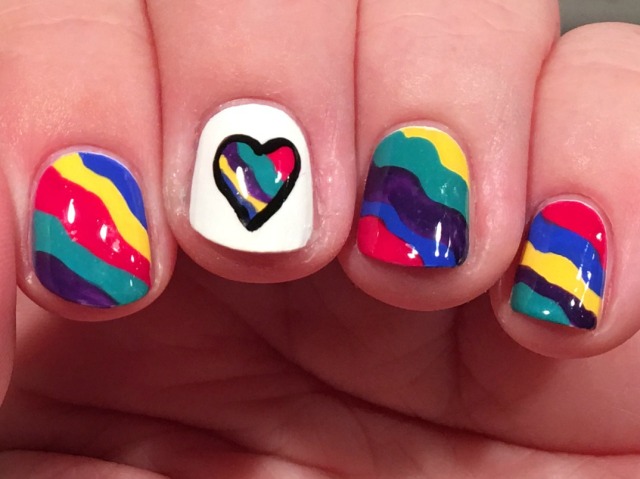 Yeah, I’d best be getting my groove on seeing as I’m now three days behind on the 31 Day Nail Art Challenge, owing to what should have been some totally foreseeable technical difficulties (the installation of higher speed Internet to my apartment, and when does that ever go smoothly?  Never, which is why I was without a connection for a day and a half, which in Internet time is equivalent to 73 very long years.)

All blogging dramatics aside, these nails are my entry towards day 22’s theme of a song in the 31 Day Nail Art Challenge.  Groove is in the Heart, by early ’90s club band Deee-Lite, is one of those musical ear worms you either love or hate.  I fall into the latter category; it’s fun, but so gimmicky, and despite my husband’s protestations – he LOVES them like he loves the B-52s, another band with a similar retro vibe – it’s the very essence of a one hit wonder, and all those slide whistles start making me feel super twitchy after a bit.  But it has inspired some pretty cool nail art, so we shall call this one a win. 🙂

I love the idea of surfing, but unfortunately, as we all know, I’m a real weenie about getting in the water with sea life that wants to eat me. But surfing looks glorious, doesn’t it? I love everything about it – the culture that surrounds it, the people it attracts, the athleticism, the spirituality, the breathtaking locales. I love it so much, Blue Crush is one of my favourite movies, and that’s not something a lot of people would admit! So it’s something I love the idea of, but I’m also fully aware that it’s something I’ll never, ever do, because I am so scared of being munched on by sharks, and I’m also not that jazzed at the thought of dashing my brains out on a wall of coral. So once again, this will have to be one of those admire-from-afar things, which is cool when what you’re admiring are these fun, super summery nails instead.

For this beach kitten mani, I used some glittery kitty nail stickers from Daily Charme. A note on using a topcoat over the stickers: Don’t. They will pretty well melt on contact. That’s a lesson the cat that was on my middle finger learned the hard way.

So these might be waves. Or maybe a cross-section of one of those semi-precious stones like Malachite. Or a melting glacier. Or seaweed washing up on shore. Or a mountain range. Or a very energetic heart monitor. That’s the beauty of a highly abstract design like this one – to each their own. All *I* know is that every one of my turquoise polishes got a major workout with this manicure, and boy howdy, did they stain! So there’s a small, useful tip with regards to blue/green-based polishes – liberally employ a base coat, or suffer the stained-out consequences. 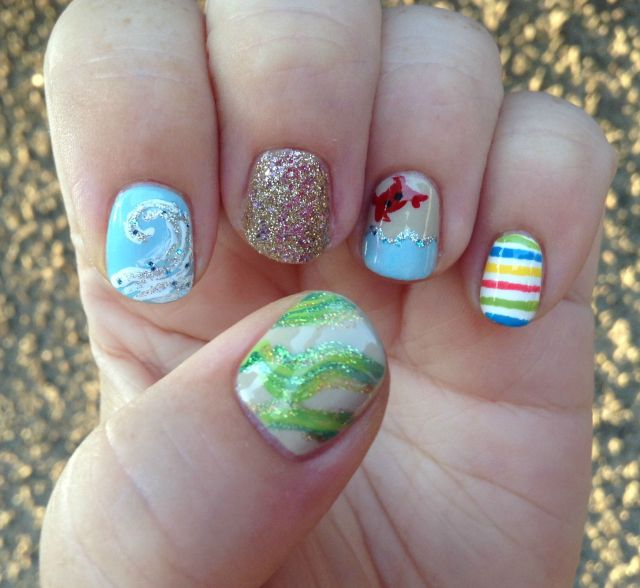 It’s pretty funny that I’ve chosen to depict some traditional elements of a beach vacation on my nails for day 21’s theme of travel in the Oh Mon Dieu Nail Art Challenge, as what I’ve shown here is pretty much my version of vacation hell. For one, I am INCREDIBLY fair skinned. Nothing a little SPF 65 can’t (hardly) handle. Secondly, and perhaps flowing from number one, I actively dislike the sensation of sunshine on my skin. Sitting out in the sun, I am always acutely aware that I’m roasting my delicate, pink pig skin, just without the benefit of being ringed in carrots, potatoes and various aromatics. Thirdly, although I’m a very strong swimmer, I’m really, REALLY scared of being touched or nibbled upon by just about every bit of flora and fauna under the sea. I also loathe getting sand up my swimsuit. So no to the actual beach vacation, but yes to these beachy nails – definitely my kind of travel. 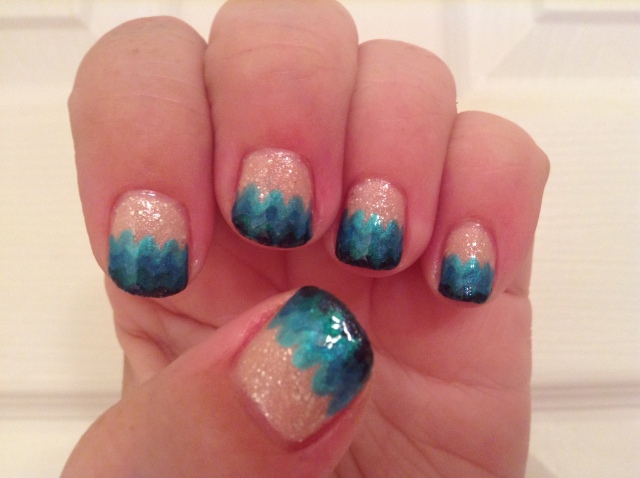 Let’s see, sandy beach, gently lapping waves…if this post was being written by anybody other than me, they might actually be into that! It’s not that I’ve got anything against beaches, it’s just that the beaches really seem to have something against me. I’m just not a beach person. Sitting under an umbrella with a good book and a drink sounds like it would be fun for about two hours, and then I guarantee you I’m looking for more air conditioned locales. Also, as we’ve covered about 100 times on this very blog, beaches are typically adjacent to slimy critter-concealing bodies of water that I refuse to even wade in. Plus I have never not burned (the summer my Egyptian friend and I had a tan-off was a very bad one indeed) and I tend to wilt in the humidity. I’m simply not a nature person under the very best of circumstances, both in temperament and pasty white skin tone, so I’d do well to stay off the beaches.

But that doesn’t mean I can’t find a way to enjoy beaches on my own terms, say safely confined to my nails where I can’t be eaten, sustain a burn or get sand up my swimsuit? Sounds like a plan! And that’s how these beachy nails came about, an idea I just sort of fell into while messing around with some new polishes and day 20’s theme of chevron in the Oh Mon Dieu nail art challenge. Chevrons lend themselves quite nicely to wave-type designs, and they look particularly lovely when crowded up against one another in a wealth of sea green polishes (one might even say they look beachy keen? Huh, huh? Nothing? Man, I’m losing my touch with corny jokes…) 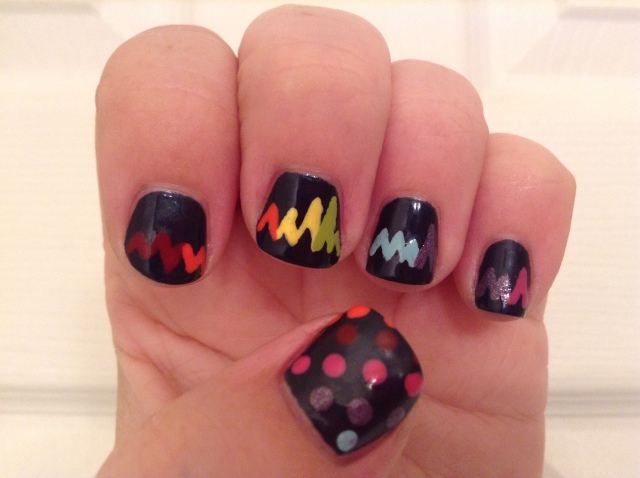 Confession: These nails are about as close as I like to get to open bodies of water capable of producing such waves. It’s not the waves themselves per se, because surfing looks awesome, nor a fear of drowning, because I’ve always been quite a strong swimmer, but rather the thought of all the aquatic squishies and biteies that dwell beneath the surface, just waiting for a tender, dangling limb to drift into their zone of attack…*SHUDDER* To quote Xander Harris of much-missed Buffy fame, I’m both tender and delicious! I mean, at the very worst, something large, slimy and hungry could eat you, and at best, something smaller, slimier and just as hungry could eat you…it’ll just take longer! Wait, that doesn’t sound like the better end of the deal…best to stay on land and keep the majesty of the ocean where you can better appreciate it – far, far, FAR away and maybe only in lacquered form!

For these nails I used a clutch of Sally Hansen Gem Crush polishes, a glittery mid-year gift from my husband, including Big Money, the sandy pink on my ring finger, and Blingtastic and Showgirl Chic, the silvery blues surfing the waves.