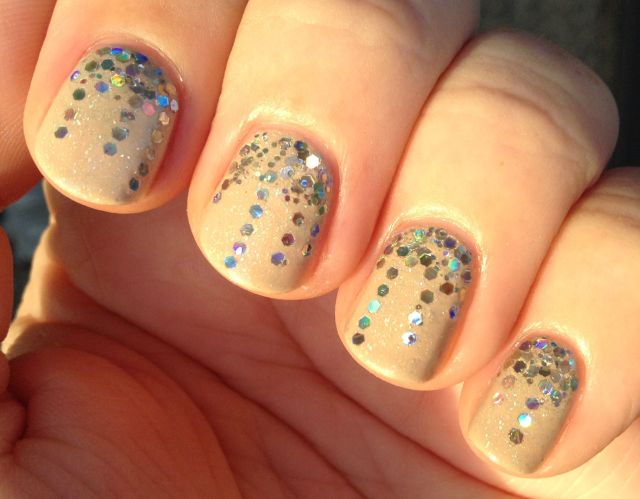 Although I created these gorgeous, shimmery nails for day 17’s theme of glitter in the 31 Day Nail Art Challenge, I suppose they’d just as easily work for the upcoming theme of inspired by a song – or two songs, specifically Britney Spears’ I’m a Slave 4 U and Toxic. Remember those glittery nude bodysuits she wore? And the insane round of pearl-clutching her videos set off? WON’T SOMEONE THINK OF THE CHILDREN?! Britney wasn’t ever my favourite, but still, to go back to a simpler time when pop stars would just hint at nudity and not, you know, actually get naked (yes, I’m a total fuddy duddy about that kind of stuff – if you have even an ounce of musical talent, you shouldn’t feel the need to get your tits – and other stuff – out at all hours of the day.) Hmm, although now that I think about it, Britney wore both of those diamond-encrusted nude suits in service of two iconic performances (one stage, one video) – neither was tied to the content of those songs (which, if I recall my Britney correctly, is mostly just a lot of panting, moaning and Auto-Tune.) So I guess we’ll stick with the generic glitter day 17 initially contemplated and leave the music for another day.

These nails were super duper easy, although the glitzy, finished product looks like one of those manis that would cause you to rip out all your hair in frustration. I started by laying down two light coats of Picture Polish’s Cherish, a pale nude creme speckled with holographic shimmer. I then dabbed on a couple of coats of Finger Paints’ Colorful Collage, a silver holographic glitter, right at the base of my cuticles, extending it down ever so slightly in a brushed-on gradient. Then, dolloping out a few dabs of Colorful Collage onto a clean paper towel (you need to get rid of the excess clear base), I picked up the slightly tacky bits of glitter, one at a time, with the pointed end of an orangewood stick before depositing them onto my nails in random, trailing lines. Et voila, dripping diamonds – supposedly a girl’s best friend. 😉 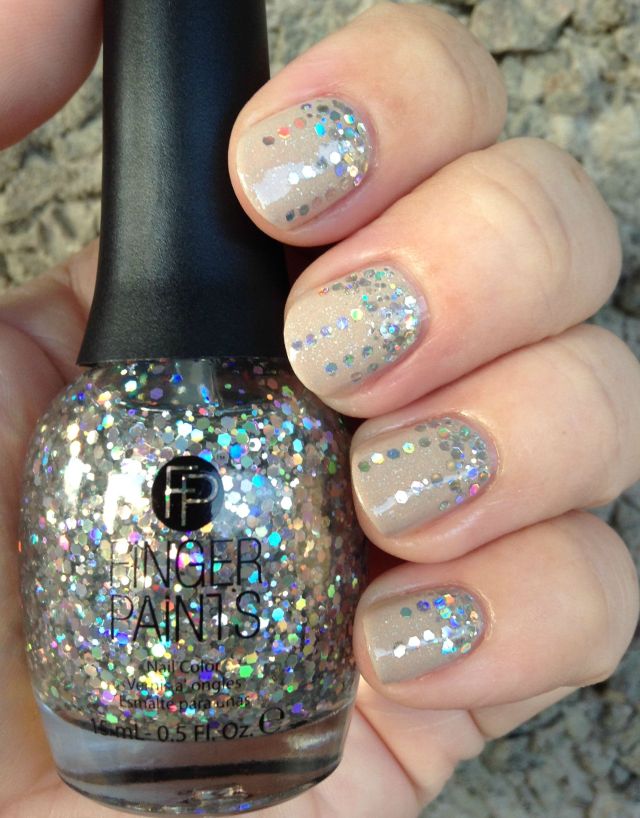