Not to be confused with Jack Skellington’s Halloween Town, this is MY Halloween town, a little cluster of much-loved Department 56 lighted buildings and accessories that I’ve been collecting since my mid-20s.  Last Friday’s call-to-action in the Fall Fun Series was to show off our Halloween decorations – clearly running a bit behind on that one, but my creepy little off-the-highway amusement park takes some time to set up, and pretty well encompasses the totality of my Halloween decorations – and I thought it would be fun to share my seasonal setup with you all.  So pay your admissions – the ticket-taker is dead excited to receive your business – and join me on a little jaunt through the haunts of my Halloween town, won’t you?

First stop is the Dead End Motel, which, burnt-out lights, rickety porch and general disrepair aside, is still moving ahead with its plans to host the Gravely wedding party. I hope they’re cool with accidental skylights and the very good possibility that the handsome bachelor innkeeper will creep on them through a peephole in the wall while they’re undressing.

Swinging clear across to the other side of town, we have Gravely Manor, a once-proud, now-haunted Victorian badly in need of some tender loving care.  Actually, that could be said about everything in town (regrettably, nearly every single one of these incredibly fragile pieces is damaged in some fashion, despite my better efforts to store them soundly. I guess I’m fortunate in that burnt-out lights, snapped tree limbs and a carousel that won’t actually turn go with the general aesthetic of a creepy amusement park, but of course I’d prefer it if they weren’t damaged in the first place.)

Speaking of damaged, I don’t know WHAT this child’s damage is, but every year she takes great delight in standing outside Gravely Manor and pointing at this poor skeleton dude taking his final nature break.  Jeez, a little privacy, please!

Once again swinging back to the other side of town, we have the Black Cat Diner, my favourite.  Actually, the diner was an anniversary gift from Mr. Finger Candy one year. And then behind the diner we have the haunted carriage house, which has been burning steadily for over 15 years.  It’s also the first building I ever bought, so I suppose we can blame it for touching off this madness!

To the right of the diner we have the now-defunct Spinning Pumpkins ride, out of operation pretty well from the moment I took it out of the box.  So no five-star rating for that Ebay vendor.  Nor for the vendor through which we bought the Haunted Carousel, which has likewise stopped turning.  Actually, that one chaps my hide pretty badly – the carousel is the largest and most expensive item in the Halloween series, but very poorly constructed. All the same, as long as its lights are still on, it remains the creepy caramel centre – look at the gorgeous bat detailing along the roof! – of my little haunted amusement park.

Just behind and to the right of the carousel lies the Scaredy Cat Ferris Wheel, the Haunted Fun House and – in a blur – the Swinging Ghoulies swing ride.  I love roller coasters, thrill rides and other amusement park attractions, but yikes, I can’t handle swing rides at all – it’s a one-way ticket to Nausea Town.  Even just watching these guys zip back and forth is making me feel a bit ill! 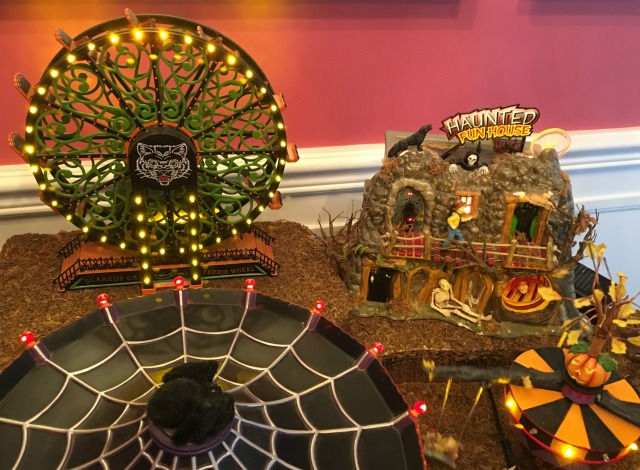 Finally, we have the lone residence in my Halloween Town – the kind of place I’ve always figured a Halloween-loving person like myself would call home (you know, should she find herself living in a rundown, way off-the-highway haunted amusement park.  Hmm, sounds like I just wrote my first Stephen King novel.) 😉

We’ll now conclude this tour with one final shot of the town all lit up (save and except one or two broken stalwarts) in the mid-day gloom of an unexpected October snowstorm.  Ooh pretty (and so very flashing orange!)  I hope you enjoyed this little tour through my town. I know I did – it’s been a couple of years since I last laid out the whole shebang, and I’ve really relished the opportunity to share it with you through the Fall Fun Series.

P.S. Have your hand stamped at the gate for reanimation.  I mean readmission. 😉